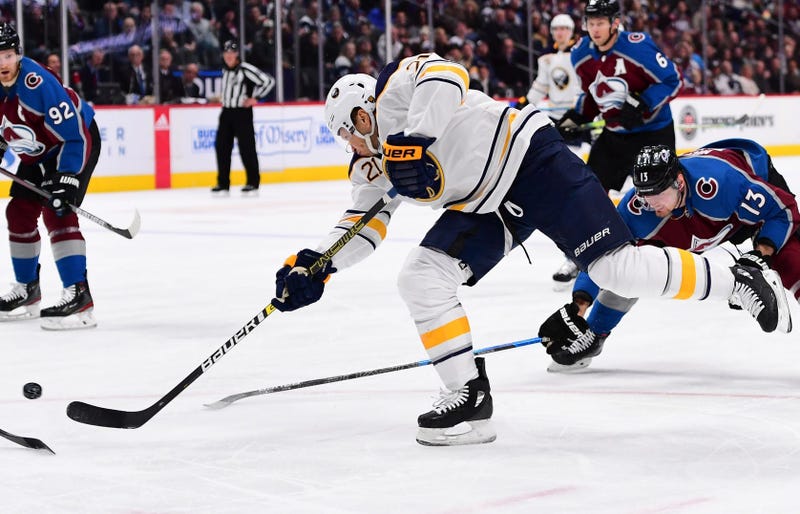 The Buffalo Sabres matched the effort and intensity of the Colorado Avalanche on Wednesday night, but lost 3-2 at Pepsi Center.

Once again, the Sabres had a quick start to the game. It did not result in a goal in the first 10 minutes of play, but the line of Johan Larsson-Zemgus Girgensons-Kyle Okposo started the game and injected life from the opening faceoff.

Ryan Graves took a penalty less than two minutes into the game, and the blue and gold had several good scoring chances that did not result in a goal, but made Colorado netminder Pavel Francouz work to keep the game scoreless. Less than halfway through the opening frame, Buffalo enjoyed a 7-4 advantage in the shots on goal category.

The Avalanche struck first and also ended the opening 20 minutes by outshooting Buffalo, 8-4. A Henri Jokiharju tripping minor led to the first goal of the game. When the penalty was called ,you could feel all of the momentum of the period swinging toward the home team’s side. Gabriel Landeskog was able to slip behind Buffalo’s defense and chip home a loose puck into the net for a 1-0 Avalanche lead.

However, Buffalo would answer just two minutes later to even the score at 1-1 late in the first. Girgensons crashed the front of the net, and thanks to a nifty back hand pass by Okposo, was in the right spot at the right time for his 12th goal of the season. Besides the top line, the “LOG” line has been the most consistent for head coach Ralph Krueger not only the last month, but all season.

The script was flipped in the middle frame as the Avalanche were the team that came out flying to assert their play. Rasmus Dahlin took a slashing minor just over five minutes into the period and it led to the second Colorado goal of the game. Buffalo was less than 20 seconds from killing off the minor when Martin Kaut was able to get to the top of the crease and slam home a loose puck for a 2-1 Colorado lead. It was Kaut’s first career NHL goal.

Michael Frolik’s strong work with the puck in the offensive zone helped Buffalo to, once again, tie the game up, this time at 2-2 with about five minutes remaining in the middle stanza. Jake McCabe took the shot from the blue line that was tipped in front by Curtis Lazar. That was good work by Frolik to not lose the puck, McCabe for letting go of a quick shot while Lazar was in front and able to get a piece.

Okposo had a chance about a minute into the third period to give the Sabres their first lead of the night, but did not hit the net with the shot. He has been so good for the team as of late, but lifted the puck well over Francouz and the game stayed at 2-2.

Former Sabres draft pick J.T. Compher was able to get to the front of the net and bury his 10th goal of the season for the game winner. Defensive breakdowns in front of Carter Hutton were a common theme in the loss. Shots on goal in the third were 14-13 in favor of Colorado. It was an even period, but the blue and gold just could not get the equalizer. Shots overall in the game were 34-33 in favor of the Avs, and I think that helped tell the story of how even the game was.

I thought the Sabres played well enough to get at least a point on Wednesday night. If they carry the same effort into Friday night against the Vegas Golden Knights, they should get rewarded with a two-point night.