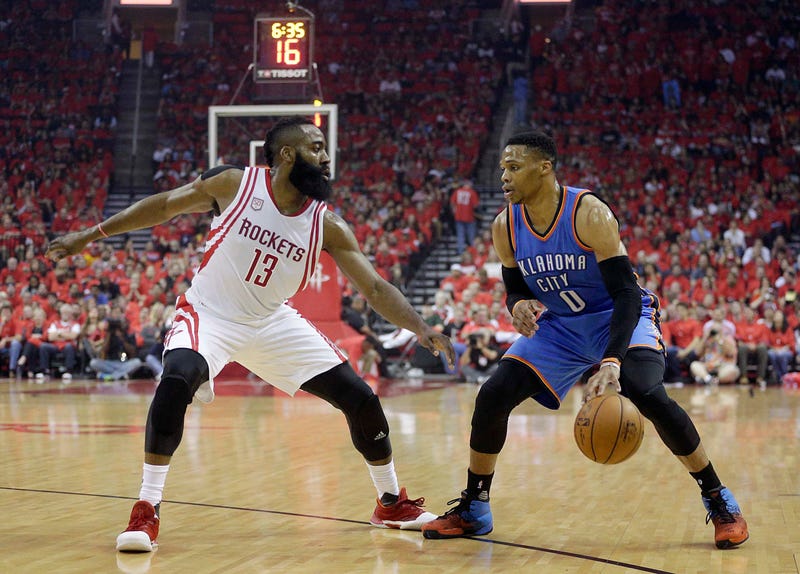 The Oklahoma City Thunder went through with the final move that pushes them into a full-blown rebuild.

The longest tenured, franchise leading scorer, and face of the franchise Russell Westbrook has been traded to the Houston Rockets in exchange for draft picks and veteran point guard Chris Paul.

The Oklahoma City Thunder have agreed to trade Russell Westbrook to the Houston Rockets for Chris Paul, first-round picks in 2024 and 2026, pick swaps in 2021 and 2025, league sources tell ESPN.

While the move ends the Thunder's hopes of rebuilding around Westbrook and Paul George as the new star tandem, it refreshes Houston's pursuit of a NBA championship after Paul's relationship with James Harden and the organization was on its last legs. Now, Harden gets to reunite with Westbrook as they spent the start of their careers together with the Thunder.

Here are the biggest takeaways from what was, yet, another blockbuster trade in the NBA:

Jokes about there being just one ball for ball-dominant guards in Westbrook and Harden will be plentiful but the combined talent of the two former MVPs should help them more than the fit will hurt.

Both stars make the most damage with the ball in their hands but so did Harden and Paul. That combination was a game away from defeating the Golden State Warriors in the Western Conference Finals just a year ago. LeBron James and Kyrie Irving weren't the perfect fit with the Cleveland Cavaliers, but their elite talent got them a championship in 2016.

Mike D'Antoni will have his hands full making it work, but the two jelled enough in Oklahoma City to help get the Thunder to an appearance in the NBA Finals in 2012.

The NBA has seen six of 15 2019 All-Stars change teams this year as the elite talents of the league are teaming up to form dynamic duos across the country.

Houston did this with Harden and Paul two years ago, but with the diminishing relationship between the two and Paul's health breaking down, the Rockets needed another Robin to Harden's Batmam to keep up in the arms race.

Westbrook and Harden will now compete with multiple elite tandems in the Western Conference that includes LeBron and Anthony Davis with the Los Angeles Lakers, Kawhi Leonard and Paul George with the Los Angeles Clippers, and the splash brothers in Golden State when Klay Thompson returns to full health.

That doesn't include the young combination of Jamal Murray and Nikola Jokic with the Denver Nuggets, the overall complete roster of the Utah Jazz, or any of the star power in the Eastern Conference. That talent in the East includes Kevin Durant (Brooklyn Nets), Giannis Antetokounmpo (Milwaukee Bucks), and Joel Embiid (Philadelphia 76ers).

While the veteran star may want out of, what is clearly, a rebuilding Thunder team, Paul's hefty contract and unreliable health may not be an attractive add for a large portion of the league. Paul also grew out of favor with many members of the Rockets organization.

A third team added to the trade could still be in play. That third team could be the Miami Heat

For now, Westbrook and Harden aren't the only ones finding a reunion through this trade.

Sam Presti has watched four MVP winners and finalists come and go through Oklahoma City in just seven years. Presti should be commemorated for drafting Durant, Westbrook, and Harden. He should be applauded for finding a way to trade for Paul George after Westbrook was the last man standing. Adding eight first round draft picks through 2026 will give him a significant advantage in the rebuild process.

However, the fact that Presti could not find the coach or supporting cast to give his stars a shot at the title every year should be seen as a massive failure. The lack of shooters and a growing frustration with Billy Donovan is believed to be a part in Durant, George, and Westbrook's displeasure with the franchise.

Donovan lacked any creativity on the offensive side of the court and the lack of any shooters who could hit a three-pointer north of 35% didn't help.

Thunder fans will now be left to think about what could have been.

It was once Durant x Westbrook x Harden in OKC.End of an era. pic.twitter.com/PNPj7LM9zZ