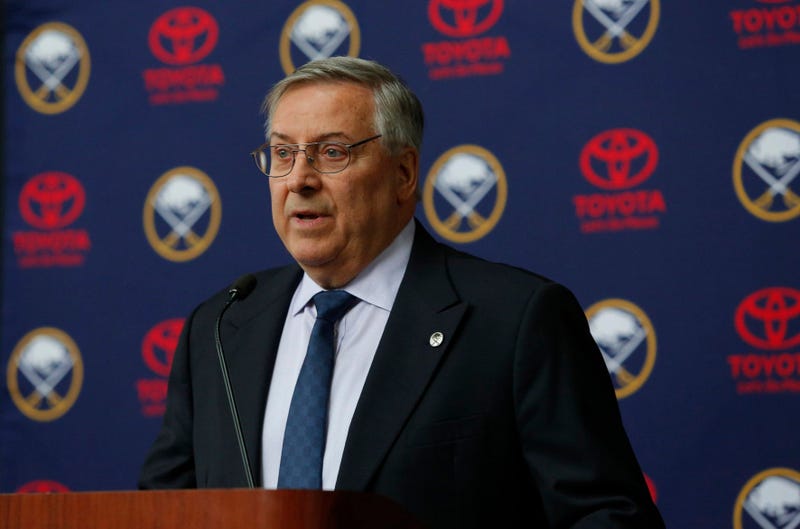 Here’s a question I’ll bet many of you have been asking yourself and/or your friends this week: How is it the Buffalo Bills and Buffalo Sabres can have the same owners and be going in completely opposite directions?

The Bills have made the playoffs two of the last three seasons and appear to have a realistic shot at their first AFC East title since 1995.

The Sabres have missed the playoffs in each of the last nine seasons, which is the longest drought in franchise history.

The simple answer is who Terry and Kim Pegula have selected to run their NFL and NHL teams.Life in the Bills' world wasn’t so sweet when Doug Whaley and Rex Ryan were in charge, but the Pegulas found their way to Sean McDermott after Ryan was fired, and McDermott led them to Brandon Beane. McDermott and Beane are the best head coach/general manager pairing for the Bills since Marv Levy and Bill Polian.

As for the Sabres, in baseball terms, the Pegulas are "o-fer".

Since inheriting Darcy Regier and Lindy Ruff, the Pegulas have missed twice on a general manager with Tim Murray and now Jason Botterill. I’ll throw out Ted Nolan’s second stint behind the bench and Ron Rolston as interim coach, so they’ve swung and missed on their two head coach choices in Dan Bylsma and Phil Housley. An attempt at improving the organization’s results by bringing in a President of Hockey Operations didn’t work either as Pat Lafontaine and the Pegulas had a falling out after just a few months of working together.In the nine years of the Pegula ownership, the Sabres have the lowest points percentage of any team in the NHL. The nine-year playoff drought is the longest in the league. The next longest active drought is just four years for the Detroit Red Wings. If the Sabres miss out on the playoffs again next season, they will equal the NHL record for the longest postseason drought in the post-original six era. The latest dark moment in Sabres history came this past Tuesday when a reported 22 employees in the hockey department were fired. From the general manager to his assistant general managers, to pro scouting, amateur scouting and the coaching staff in Rochester.
Longtime NHL observers called it unprecedented, citing it as the single-biggest day of carnage for any NHL team. You might not have been surprised that Botterill was shown the door after three years in the general manager's chair, but I’m sure you were stunned at the extent of the house cleaning that unfolded over the course of the day.As sad as you might have felt after that or when you heard the NHL expanded its post regular season field to 24 teams and the Sabres still didn’t qualify, I honestly don’t think I can feel any worse about the franchise than I have over the last few years.

There are different general managers, different coaches, different players and the results are the same. The Sabres have become the worst franchise in the NHL. They keep getting high draft picks and usually spend up to or near the salary cap, and yet there is nothing to show for it.

When Lindy Ruff was coaching here, he used to make reference to the hope tank from time-to-time. My hope tank for the Sabres has been on "Empty" for quite some time. It feels like this franchise will never ever win anything, and just making the playoffs seems like a pipe dream.

Earlier this week, Ralph Krueger told Terry Pegula that the Sabres aren’t far removed from winning, and just last month Kim Pegula said the owners see some positives that fans might not.

Adams takes over the job in a critical offseason for the Sabres. Buffalo has just 10 players under contract next season and over $34 million in cap space. The offseason to-do list includes deciding which, if any, of their unrestricted free agents to bring back. That group includes Johan Larsson, Zemgus Girgensons, Jimmy Vesey and Wayne Simmonds. There are a number of restricted free agents to take care of, most notably Sam Reinhart, who will be looking for his first big contract. We can’t forget about the annual discussion of whether or not Rasmus Ristolainen should be traded. However, the No. 1 item on that list is to find a legitimate center to play behind Jack Eichel. We can make that 1A, and then 1B will be to add more scoring in the forward ranks.I have a bad feeling the offseason plan will be to keep the band together for another season (remember, they aren’t far removed from winning and you don’t see the positives they do) and count on youngsters like Dylan Cozens, Casey Mittelstadt and Tage Thompson to make a difference.

In the meantime, I’m putting all my eggs in the Bills basket.