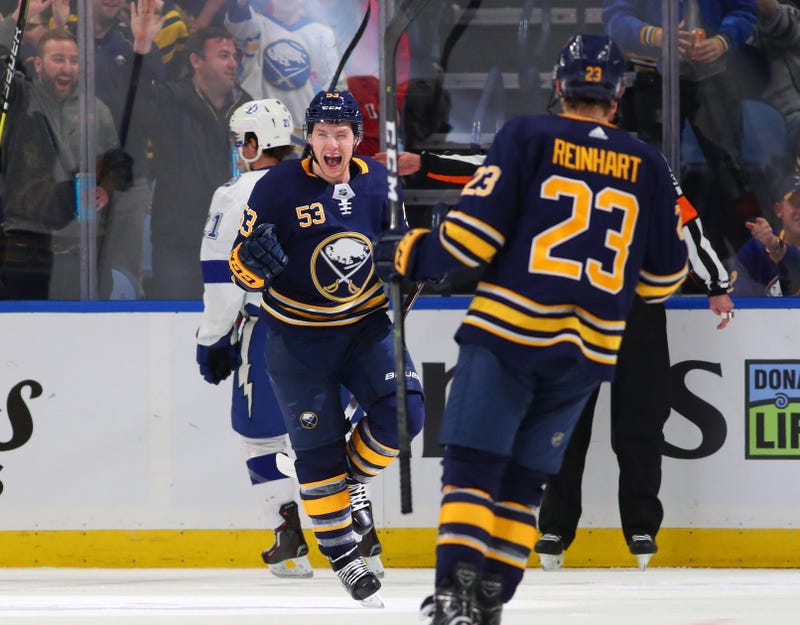 Signing Skinner was a no brainer for a team that desperately needs offense and was a one line team last season. Skinner developed chemistry with Jack Eichel and became a fixture on the No. 1 power play. I know we're talking about a lot of money and a contract that will take Skinner to age 35, but I think Botterill knew how important Skinner is to their hopes of turning around the franchise. His departure would have created a huge hole on an offense that already lacks firepower.

If you're worried about the contract I’m going to guess your two big questions are whether or not Skinner is worth that kind of money, and whether the contract will be a big problem over the last few years if there is a drop off in production. You might even be thinking about deals handed out to Ville Leino, Matt Moulson and Kyle Okposo.

As to whether or not he is worth it, the short answer is yes. Skinner is a goal scorer and this just in, goal scorers make very good money.

Over Skinner’s nine seasons in the NHL, he has had three seasons each of 20-plus goals and 30-plus goals, in addition to the 40-goal campaign in his first season with the Sabres. One of his two sub-20-goal seasons was the lockout shortened 2012-13 season.

Skinner also produces at even strength, which is something the Sabres desperately need. Buffalo was 21st in 5-on-5 scoring last season, which isn’t good, but it's much better than the four years prior to Skinner’s arrival when the Sabres ended 31st, 28th, 28th and 29th. Skinner is fifth in the league in even strength goals over the last four years, trailing only Alexander Ovechkin, Vladimir Tarasenko, Patrick Kane and Connor McDavid.

As to the issue of length of contract and possible salary cap issues down the road, the Sabres have very few long-term commitments at this point. Jack Eichel is under contract through the 2025-26 season. Kyle Okposo has four more years left on his deal and Rasmus Ristolainen is under contract for three more years. That is it in terms of “longer” commitments, so the Sabres have cap flexibility. In addition, how many players do we expect to sign a longer, big money deal in the next few years? Sam Reinhart and Rasmus Dahlin are the only two guys on that list. I wouldn’t worry about Skinner’s contract making it hard for the Sabres to do business over the last two or three years. By the way, if that does happen it means the Sabres have a number of players who have performed so well that they are in line for big money. That would be a nice “problem” to have.

When it comes to worrying about other big contracts that came back to haunt the Sabres, Skinner is really in his own category. Don’t even mention Ville Leino in this discussion. Leino had only one season in his entire career where he reached double digits in goals. The Sabres overreacted to a strong playoff performance from him and gave him a stupid contract for what he had produced to that point.

When Moulson returned to Buffalo for five years and $25 million, he was 31-years-old. Skinner just turned 27 in May. When Okposo signed his seven-year, $42 million deal, he was 28, which is just one year older than Skinner, but keep in mind Okposo has never reached the 30-goal mark. Skinner has reached it four times.