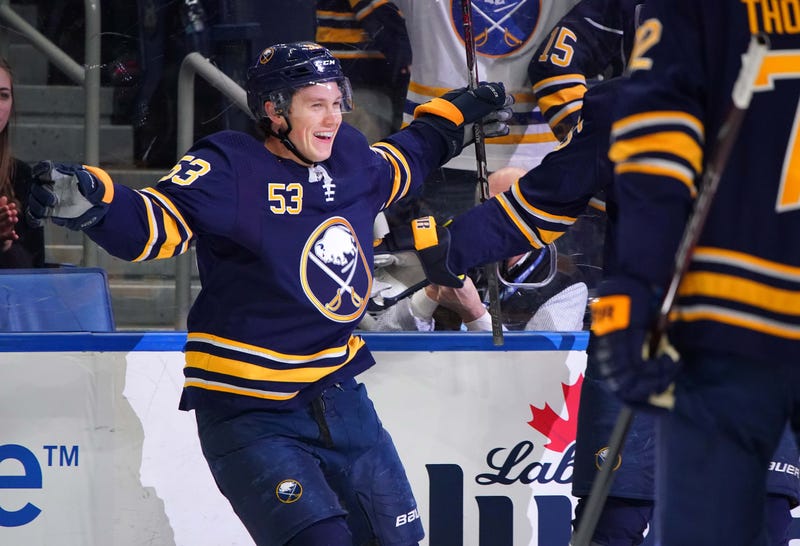 Jeff Skinner should send a thank you note to the Vegas Golden Knights. When the Golden Knights gave newly acquired winger Mark Stone a contract extension worth an average of $9.5 million a year, Skinner had to be the second happiest man in the NHL.

It was only last summer I was thinking the floor for Skinner’s next contract would be at least $7 million a year. After all, that's what former Buffalo Sabres forward Evander Kane got when he passed on free agency to stay with the San Jose Sharks. James Van Riemsdyk received the same average salary when he used free agency to return to the Philadelphia Flyers. Skinner’s price certainly started to rise as he continued to put the puck in the net during his first season as a Sabre, but the Stone contract officially established a market price.

There are a number of similarities between the two players. Both are 26 years old (they were born three days apart in May of 1992), both are/were in the final year of their contract and headed to unrestricted free agency for the first time. Both are wingers who are having their best season, in terms of goal scoring. Stone has a career-high 28 goals, while Skinner’s total of 36 is one away from his single season best. Stone has five straight seasons of 20 goals or more, while Skinner has four in a row. Skinner does have one notable edge with four 30-goal campaigns on his resume, while Stone has none. However, Stone has produced more total points, an average of .84 per-game over his nearly seven seasons in the NHL, while Skinner is at .67 in this his ninth NHL season.

Since the Sabres' playoff chances are pretty much shot, whether or not Skinner re-signs with Buffalo is now one of the top storylines for this team. He’s the best goal scorer around here since Thomas Vanek, and if the Sabres aren’t able to reach an agreement with the Toronto area native, it will open up a huge hole on the roster. Skinner has been a great fit with Jack Eichel, who is having his best season in terms of points. Each player is responsible for the other having a career best year.

So how much should the Sabres pay Skinner and how long should the contract be? Now that we are past the trade deadline, the Sabres can do what no other team can do by offering Skinner an eight-year contract. In terms of average value, the easy answer is less than the $10 million a year that Eichel is making. Eichel should be the highest paid player on the team at this point, and while an agent wants to get everything he can for his client, I wouldn’t think Skinner’s agent would be looking to make him the highest paid Sabre.

Word on the streets has the Sabres not wanting to go beyond $9 million dollars a year, but Stone’s new deal in Vegas might force them to go beyond that. I know. It's a lot of money, but this is what the market is now going to yield for a goal scorer like Skinner. He’d also be giving up a chance to go out into the free agency and he’ll want to be compensated for that as well. If the Sabres are willing to go to $9 million a year and Skinner’s side is looking for Stone money, just pay the man. Would it be worth half a million dollars a year to let your best goal scorer walk away? Of course not.

When it comes to the salary cap, the Sabres are in good shape. There aren’t many long-term commitments on the books. In fact, the only players under contract beyond next season are: Eichel, Kyle Okposo, Rasmus Ristolainen, Carter Hutton and Rasmus Dahlin (and he is on a very affordable entry-level contract). If you’re wondering about making a big Skinner contract fit, it should not be a problem. As opposed to teams loaded with talent like the Tampa Bay Lightning and Toronto Maple Leafs there are no discussions here about how to keep all the players who will be getting big money. At this point, Dahlin and Sam Reinhart look like the only players in line for a big contract down the road. Jason Pominville ($5.6 million) and Matt Moulson ($3.9 million) will both come off the books after this season, so there’s your $9.5 million in cap space.