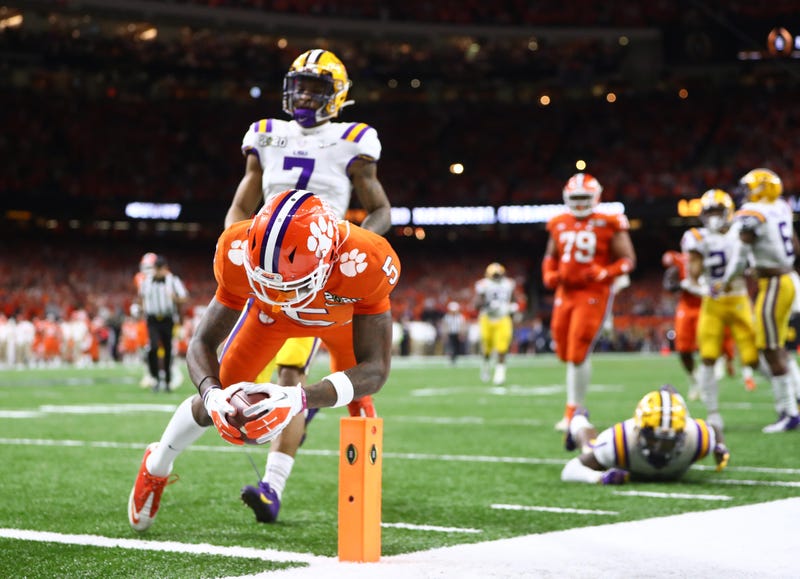 College football has a new champion after the LSU Tigers defeated the Clemson Tigers 42-25 on Monday in the College Football Playoff National Championship at the Mercedes-Benz Superdome in New Orleans.

In a game loaded with NFL talent, many that will be available in the 2020 NFL Draft, who helped their draft stock with one final performance on the amateur level?

It's not like his stock really would have moved even with a bad performance against Clemson. The Cincinnati Bengals will take him first overall in April regardless, but Burrow made the Bengals feel even better about having the Ohio native as their future quarterback.

Against a Clemson defense dripping with top-tier prospects, Burrow threw for 463 yards and five touchdowns. He also ran for another touchdown in the win.

He outplayed the top 2021 quarterback prospect in Trevor Lawrence by a substantial margin.

Higgins is an early favorite for the Buffalo Bills at the 22nd overall pick in the 2020 NFL Draft. He is a large target that can go up and get some incredibly tough passes in tight coverage, but he is also fast and a great route runner.

That speed and run after the catch ability was on full display during a 36-yard reverse that went for a touchdown.

This angle of Tee Higgins’ truck stick --(via @ClemsonFB) pic.twitter.com/oc1NAmDiNB

Higgins finished the game with 86 yards from scrimmage, cementing his place as a first round selection.

Jefferson's performance on Monday may have helped paved the way for him to becoming a Day 1 selection at the NFL Draft.

Against a Clemson secondary that has three prospects who will be a first or second round pick, Jefferson finished the night with nine catches and 106 yards.

Jefferson is another wide receiver prospect that fits the mold of what the Bills need. A big, physical wide receiver without any real athletic limitations.

If the Bills want a pass-rusher that has unlimited potential, they should have been watching very closely to LSU's front seven.

K'Lavon Chaisson was at Trevor Lawrence's feet all game, showing off his incredibly explosive first step and power.

Buffalo could be looking for multiple pass-rushers this offseason, depending on what happens with defensive ends Shaq Lawson and Jerry Hughes.

Chaisson's ability to generate pressure within seconds could be enticing in the first round.

Queen's stock went up more than anyone in this game.

The inside linebacker was seen as a Day 3 pick this April before being the best defensive player for LSU on a defense that has three potential first round picks in Chaisson, Grant Delpit, and Kristian Fulton.

Queen finished with eight tackles, a half of a sack, and two tackles for a loss.

In an NFL that now requires linebackers to be more like safeties, Queen should fit the bill of a modern-day middle linebacker. He is one of the most explosive linebackers in the draft, and while he is very raw, Monday showed what he could do against premier talent.

Front offices surely took notice of the product on the field at the Superdome. For the Bills, specifically, those who shined for both LSU and Clemson will surely interest them in April.

news
Man faces federal charges for 'brazen' theft of unemployment insurance money
news
In terms of election cookie sales, Dr. Fauci takes the cake at one suburban bakery
news
CVS adding 1,000 rapid-result COVID-19 tests sites by end of the year
news
Krispy Kreme and other chains offering freebies for voting on Election Day
news
8 frightening podcasts to get you ready for Halloween
news
What you should and shouldn’t bring to the polls this Election Day