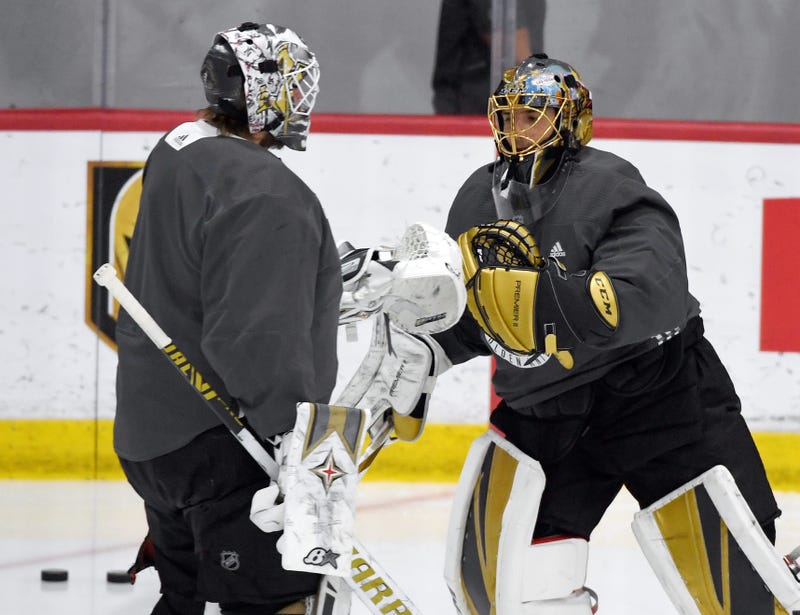 The Vegas Golden Knights have a problem that a lot of teams likely would not mind having heading into the 2020 Stanley Cup Playoffs: two starting caliber goaltenders on their roster.

Marc-Andre Fleury has, arguably, been the face of the Golden Knights franchise since their inaugural season in 2017-18 when they want to the Stanley Cup Final. However, Vegas went out and acquired goalie Robin Lehner from the Chicago Blackhawks, who is coming off a 2018-19 season with the New York Islanders where he finished as a finalist for the Vezina Trophy as the National Hockey League's top goaltender of the season.

While both goaltenders were playing fine at the time of the suspension of the 2019-20 regular season back in March, head coach Pete DeBoer had a tough decision to make as to which goaltender to turn to come the start of the playoffs in the Edmonton bubble. However, in the team's eight playoff games to this point, DeBoer has elected to go with Lehner in six games, while starting Fleury in just two games.

As the Golden Knights prepare for the start of their Western Conference Semifinal Round matchup with the Vancouver Canucks on Sunday, DeBoer has elected to go with Lehner once again for the opening game of the series.

Player agent Allan Walsh has been known for being open to dish out some criticism on social media with the NHL or any new surrounding the players he represents. However, on Saturday afternoon, Walsh took his criticism to another level, tweeting out a cryptic photo of Fleury with a sword stabbing him through his back. On the blade of the sword has the name "DeBoer" written on it, implying that the Vegas head coach is stabbing Walsh's client in the back with his decision.

This season was a bit of a down year for the 35-year-old netminder, putting up a 27-16-5 record in 48 games started with a 2.77 goals-against average, a .905 save percentage and five shutouts. So far in his two playoff starts with Vegas, Fleury has won both games and posted a 2.50 goals-against average and a .886 save percentage. Those numbers may not seem so great, but he has only averaged 22 shots faced in his two games played.

Fleury still has two more years left on his current contract with the Golden Knights with an annual average value of $7 million.

As for Lehner, the 29-year-old has done fairly well at replicating the success he had with the Islanders in his time split between the Chicago Blackhawks and Vegas. In 33 regular season games starting with Chicago this year, Lehner went 16-10-5 with a 3.01 goals-against average, but was peppered with shots-against on a regular basis and still put up a .918 save percentage.

At the NHL Trade Deadline, the Golden Knights acquired Lehner from Chicago in exchange for goalie Malcolm Subban, prospect Stanislav Demin and a second round pick in the 2020 NHL Draft. In three starts for the Golden Knights before the season was shut down due to COVID-19, Lehner was spectacular with a 3-0-0 record, a 1.67 goals-against average, a .940 save percentage and a shutout. So far in his six playoff games, Lehner has been very solid for Vegas with a 5-1 record, a 2.44 goals-against average and a .904 save percentage.

Lehner is expected to become a free agent this offseason as his current contract he signed with the Blackhawks is set to expire in October.

When asked about his decision to ride with Lehner through the playoffs over Fleury, DeBoer told TSN hockey insider Pierre LeBrun that Lehner has just been at a different level than Fleury, and he has done what a coach would want any player to do when arriving to a new team.

Here’s what Vegas head coach Pete DeBoer told me this week when asked about riding Robin Lehner so far in the playoffs: pic.twitter.com/6AHH6d4jzF

DeBoer also recently joined the Golden Knights this season after he was hired by the team on Jan. 15 after the team fired head coach Gerard Gallant. The Sharks had just fired DeBoer as their head coach on Dec. 11 after a rough 15–16–2 start to the 2019-20 season.

Faceoff on Sunday is set to get underway between the Golden Knights and Canucks at 10:30 p.m. at Rogers Place in Edmonton.