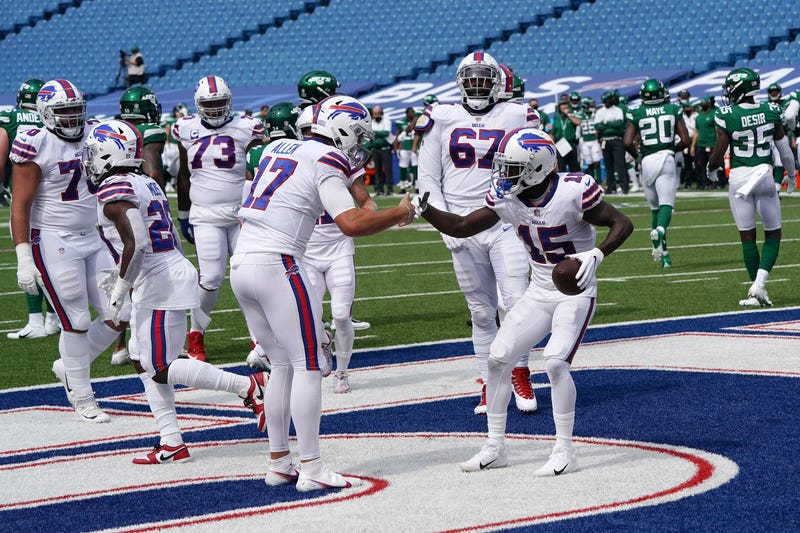 The Buffalo Bills kicked off the highly-anticipated 2020 season with a 27-17 win over the New York Jets on Sunday afternoon in front of an empty Bills Stadium.

It wasn’t a perfect game by any means, but a strong start from the offense, an overall solid performance from the defense and the first-ever 300-yard passing game for Josh Allen were enough to get a Week 1 victory.

Despite two first half turnovers, both being Allen fumbles, the Buffalo offense had a lot of good moments in the first half.

After fumbling the ball on the first possession, Allen bounced back and led a seven-play, 55-yard touchdown drive that ended with Allen, himself, running into the end zone for a score from two yards out.  Allen was the Bills’ leading rusher for the game, finishing with 57 yards on 14 carries. Devin Singletary added to the run game with 30 yards on nine touches. Rookie Zack Moss saw some action in the backfield as well, getting nine rushes for 11 yards.

Allen had a lot of success through the air as well, reaching the 300-yard passing milestone for the first time in his pro career. He completed 33-of-46 passes for 312 yards and two touchdowns, a strong performance despite the turnovers. His first passing touchdown of the season came late in the first quarter on a four-yard toss to Moss, stretching the Buffalo lead to 14-0.

The offense continued to roll in the second quarter and scored on a third consecutive series after putting together a 14-play, 68-yard drive in just under eight minutes. This drive ended with Allen connecting with wide receiver John Brown for a 17-yard catch-and-run score to make it a three-touchdown game. Brown finished with six catches for 70 yards to go with his score, while Stefon Diggs led all receivers with eight catches for 86 yards in his Bills debut. Singletary and Cole Beasley caught five and four passes respectively. In total, eight Buffalo receivers caught a pass in the win.

The Buffalo defense came to play, as expected. The Jets offense went three-and-out in each of its first three drives and ended the game with 254 total yards. New York quarterback Sam Darnold finished the game 21-of-35 for 215 yards and a touchdown. Along with getting sacked three times, Darnold was also intercepted by Bills linebacker Matt Milano with 5:50 to go in the second quarter.

Milano registered four tackles to go with his interception, but missed the second half after leaving the game with a hamstring injury. Tremaine Edmunds also exited the game in the second half and did not return due to a shoulder issue. A.J. Klein and Taron Johnson each had five tackles to lead the Bills. Tyrel Dodson, Mario Addison and Trent Murphy finished with four, three and two tackles respectively, and each recorded a sack.

The Jets got on the board with a field goal just before halftime to trail 21-3 at the break. New York’s momentum carried over to the second half and the lead was cut down even more when Jamison Crowder took a pass 69 yards to the end zone to make it 21-10 with 5:10 to go in the third quarter.

Following the Jets score, the Bills had a chance to extend their lead and make it a two-score game, but were unable to capitalize when Tyler Bass missed a 31-yard field goal late in the quarter, his second missed field goal of the game.

Bass would make up for his previous misses, salvaging a drive early in the fourth quarter with a 22-yard field goal after Allen overthrew a wide-open Brown in the end zone. The rookie kicker finished the game 2-for-4 on field goals after he added a late 19-yard chip shot to make the score 27-10.

The Jets offense began to come alive in the fourth quarter and made things somewhat interesting in the final minute with a two-yard touchdown run from Josh Adams to make it 27-17, but the Bills easily held on to best their AFC East rival and start the new campaign 1-0.

Stats of the Game:

WHAT'S NEXT:
The Bills will travel to Miami to take on the Dolphins in an all-AFC East Week 2 matchup. Kickoff is scheduled for 1 p.m on Sunday, Sept. 20. Coverage on WGR will begin Sunday morning at 7 a.m.