Like everyone else, the NFL had to make some adjustments for Thanksgiving in 2020.

The third and final game on the league's slate for Thanksgiving had been slated to be Baltimore Ravens at Pittsburgh Steelers, but COVID-19 forced the game to be postponed to Sunday afternoon.

Instead, we'll be left with just two Thanksgiving games, Houston Texans at Detroit Lions and The Washington Football Team at Dallas Cowboys. Neither are especially sexy matchups, but that doesn't mean they don't carry quite a bit of importance.

The Lions are coming off of 20-0 loss to the Carolina Panthers, and the futures of both general manager Bob Quinn and head coach Matt Patricia - and perhaps quarterback Matthew Stafford - hang in the balance. Meanwhile, 2020 has turned into a lost season for the Texans, but Deshaun Watson and J.J. Watt led Houston to a 27-20 upset in New England last week. Having won two out of three games, Romeo Crennel appears to have a chance to land the Texans' job on a full-time basis if things continue to trend in the right direction.

In the second - and final - game of the day, The Washington Football Team and Cowboys will quite literally be playing for first place in the lowly NFC East. Both teams won in Week 11, and whichever wins Thursday evening will pass the Philadelphia Eagles and New York Giants for the lead in the worst division in the sport.

Before we get into our picks for Week 12, let's take a look at the season-long records of our RADIO.COM Sports central team:

Without further ado, here are selections on every game from this week's slate: 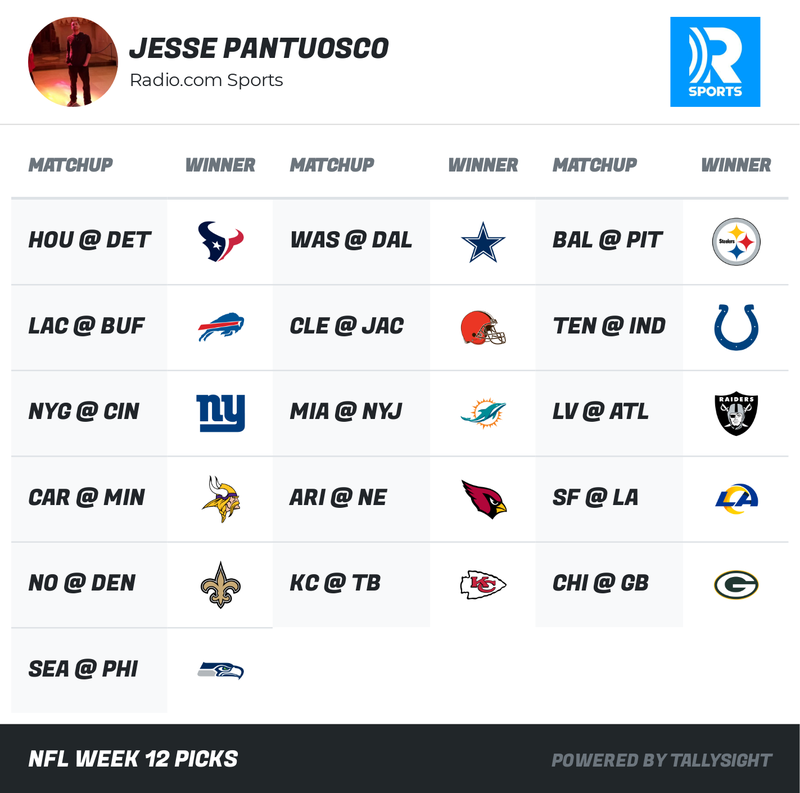 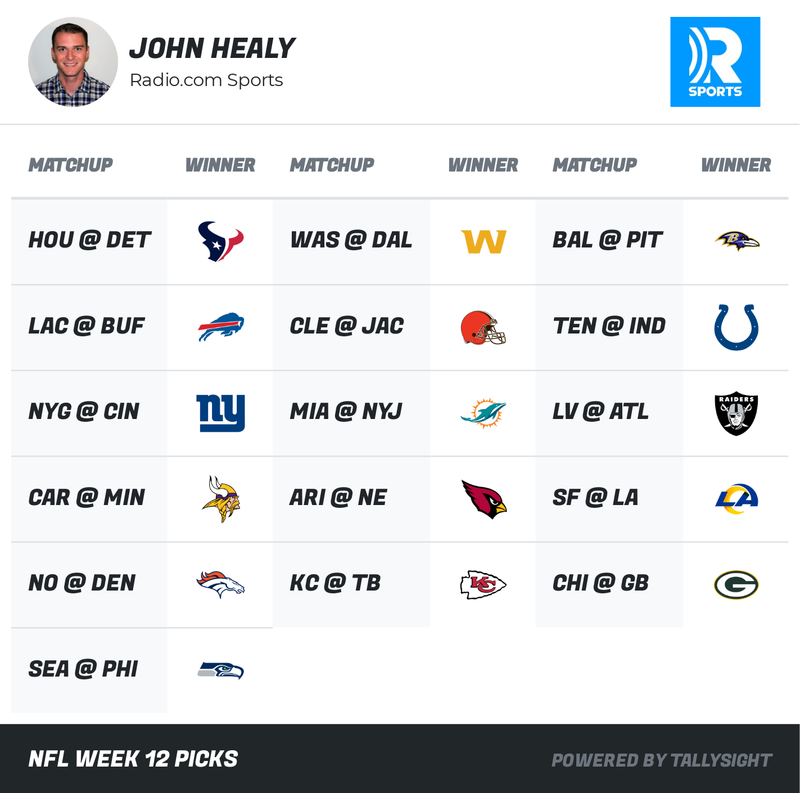 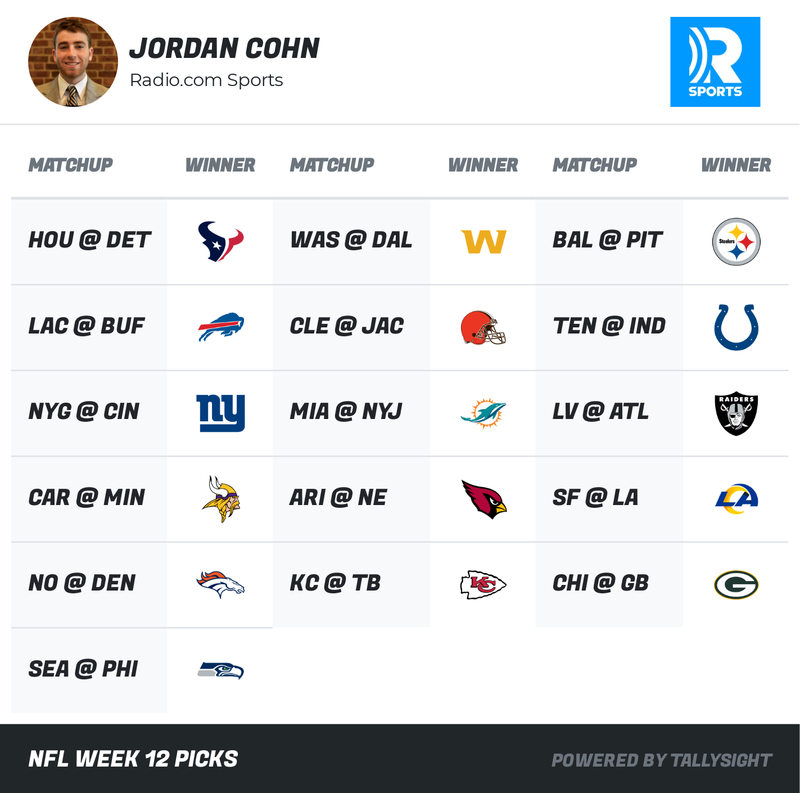 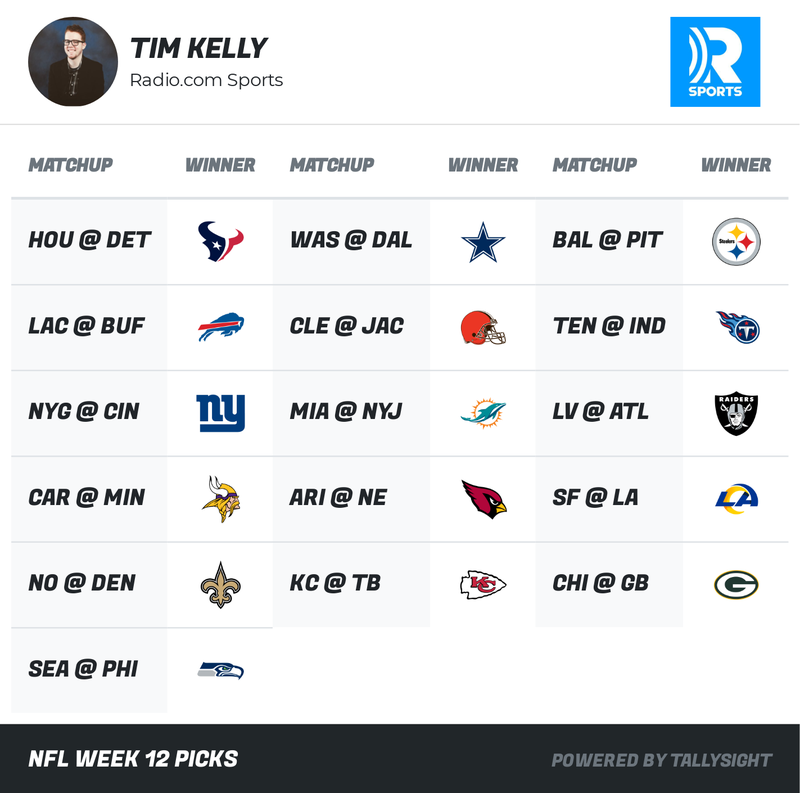 music
Vote on the 'Top 7 @ 7' songs with Rob + Holly
news
Why do many Americans have trouble believing race plays a role in health disparities?
music
15 songs we need The Weeknd to perform at the Super Bowl Halftime Show
music
Ana de Armas spent 9 months perfecting Marilyn Monroe's voice for new film: 'My brain was fried'
music
'America's Most Wanted' returns to Fox with new host
music
RADIO.COM's Country Hit Pick of the Week: Jimmie Allen with Brad Paisley 'Freedom Was A Highway'