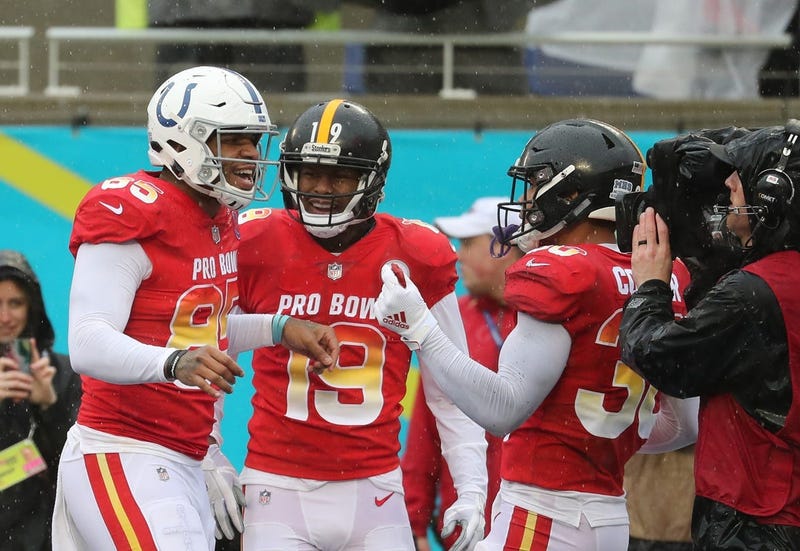 PITTSBURGH (93.7 the Fan) – A one-time Pro Bowl tight end Eric Ebron is ready for a fresh start in black and gold.

“It’s the Pittsburgh Steelers,” Ebron said via conference call on Thursday.  “It’s one of those iconic, historic organizations that if you get that opportunity to play for, you don’t turn it down.”

Ebron’s season ended in December with the Colts when he told them he could no longer play through the ankle pain that he started suffering in August.  Ebron said he informed the team the week before he shut down what was happening saying “I was hurt and no one wants to play hurt”.

Ebron said he wanted to have double ankle surgery in December so he would be ready for this year.  The 26-year-old said he had “stuff in the ankle cleaned out” and while not 100% right now, he will be ready for the season.

“Mike Tomlin pretty much told me that he would put me in the best possible situation to succeed with my abilities,” Ebron said of his role.  “All I needed to hear is that he believed in my abilities and the things I could do and know that I do them better than most people.  That is what you want for a player coming into the prime of his career.”

There have been bright spots, including catching 66 passes for 750 yards and 13 touchdowns in 2018.  The NFL totals for the Newark, NJ native, are 283 receptions, 3195 yards and 27 touchdowns over six seasons with Indy and Detroit.

Ebron said he’s excited to be paired up with a quarterback in Ben Roethlisberger, who he has always admired.

“Ben has always willed his way to greatness,” Ebron said.  “He’s won Super Bowls, he’s played through injuries and won games.  You see what kind of person Big Ben is.”

The two actually met in January at a Christian conference when he told Ben he would be a free agent and the two talked about what it would be like to play together.

“If I can be Big Ben’s best friend like I was with Andrew (Luck), as I was always in his ear and in his pocket.  Just trying to figure out the game through their lenses because they are elite minds at this level.  I just want to pick and understand from his view how things are.”

Ebron says he has no concerns about Roethlisberger being healthy as he watched his Indy quarterback retire before last year.

Living in Houston with his family, Ebron, unlike many of us right now, has a routine.  He gets up, works out at 5a, plays golf and spends the rest of the day with his kids.

Sounds pretty good for a guy who reportedly has had issues in the clubhouse at times.  Ebron has been all smiles about joining the Steelers as he sees the opportunity to do something he hasn’t yet.