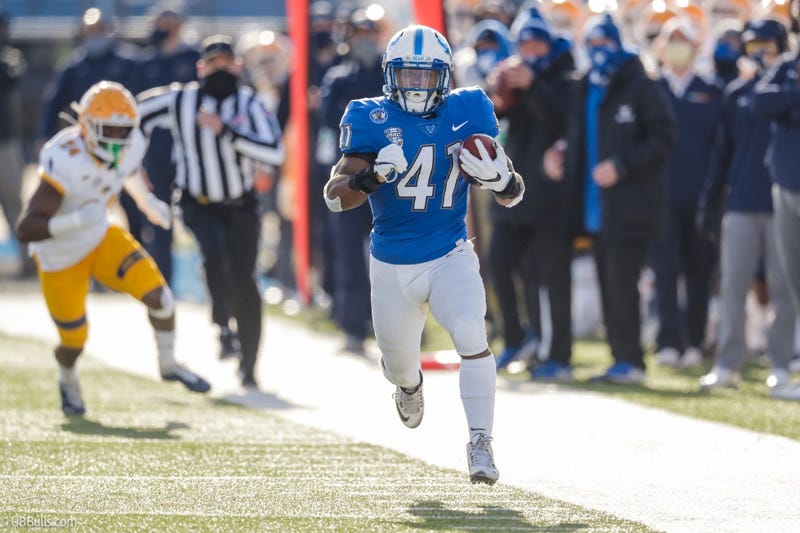 Throughout this season and his three-year career at the University at Buffalo, Jaret Patterson has put on some of his best performances in the biggest games.

Patterson turned in the most impressive performance of his already storied UB career on Saturday afternoon, as he carried the ball 36 times for 409 yards and eight touchdowns, both school and conference records, in a 70-41 Bulls’ victory over Kent State at UB Stadium.

Patterson looked a bit different out on the field against Kent State, wearing No. 41 opposed to his usual No. 26. The No. 41 jersey has been given out to a different player to wear each game by UB head coach Lance Leipold over the last few seasons to honor Solomon Jackson, a former Bull who passed away in 2016. Despite the different uniform number, Patterson did what he seemingly always does; deliver when the Bulls need him to.

Some people dubbed Saturday’s matchup between the Bulls and Golden Flashes as “the game of the season” in the Mid-American Conference. With the MAC schedule shortened to just six games in 2020, the clash between the top-two teams in the East, both undefeated going into the game, had a lot of stake. The winner could very well end up with the division title and a spot in the conference championship game.

Patterson’s eight rushing touchdowns tie the most in a single game in FBS history, matching Illinois’ Howard Griffith’s eight-touchdown game in 1990. With his 301-yard rushing performance in last week’s win against Bowling Green, Patterson became the first player in the FBS to rush for over 300 yards in back-to-back games since Ricky Williams accomplished the feat while playing at Texas in 1996.

Patterson has now rushed for a total of 920 yards and 16 touchdowns in four games this season.

“Nobody really told me [about the stats and records], not until probably the sixth [touchdown],” Patterson admitted following the win. “I just really wanted to keep running. I knew we needed more touchdowns to keep extending our lead. Kent State has a fast-paced offense. They score a lot of points. If their offense scored, our offense had to score. So, I just took it in my own hands to take over this game.”

Patterson and company didn’t take too long to get on the scoreboard once the game got underway. The junior found the end zone less than a minute into the game with a three-yard score, which was set up by a 62-yard run by Patterson on the first play of the game. The running back had a trio of rushing touchdowns in the first quarter alone, giving the Bulls a 21-10 lead after 15 minutes.

That's all we have left to say about @__JP26 @UBFootball | #MACtion pic.twitter.com/z4XaKhvOg1

Kent State’s high-powered and fast-paced offense, led by quarterback Dustin Crum, was able to keep the Golden Flashes afloat in the first half. While they were hurt by penalties and missed field goal early in the second quarter, Kent State kept things interesting by answering Buffalo’s touchdowns with quick scores of their own.

Crum completed 15-of-21 passes and threw for 200 yards and a pair of touchdowns in the first half, while also running for another. The senior’s rushing touchdown made it 28-24 in favor of UB with 6:29 in the first half, but Patterson quickly made it a two-score game again with his fifth touchdown of the afternoon, giving the Bulls a 35-24 lead, which they took into the locker room at halftime.

Kent State cut the deficit to four again early in the third quarter, scoring just 1:18 into the second half. But, from that point UB began to take control of the game.

Patterson again responded to Kent State with his own score. His sixth touchdown put the Bulls up 42-31 with 10:01 to go in the quarter. Kevin Marks got in the scoring before the period ended. The junior ran for a seven-yard touchdown, one of two from him in the game, to extend the UB lead to 49-31 with 1:17 left in the quarter. The junior finished with 97 yards on 16 carries to go with his pair of scores.

With the game already slipping away from Kent State, Crum made his biggest error late in the third quarter when he was intercepted by Buffalo’s Cory Gross. The turnover gave UB even more momentum, helping the Bulls put Kent State away in the fourth. Crum finished the game 22-for-32, passing for 343 yards and three touchdowns along with the interception.

Despite giving up 41 points, all things considered, the Buffalo defense did its job against Kent State. Going into the game, the Golden Flashes led the FBS in rushing, averaging 299 yards per-game. The UB defense held Kent State to just 235 yards on the ground, and no Golden Flashes’ player rushed for more than 76 yards individually.

The Bulls got three more rushing touchdowns in the fourth quarter, two from Patterson and one from Marks. The former put the nail in Kent State’s coffin with a 58-yard rushing score, his eighth and final touchdown, to extend the Buffalo lead to 63-34 with 7:44 remaining on the clock.

The touchdown ties the NCAA record for most rushing TD's in a game. @UBFootball | #MACtion pic.twitter.com/UhdJAI79XO

“I have to give credit to the big guys up front. They do a tremendous job opening big holes for me and Kevin Marks. Hats off to those guys,” Patterson said. “This was a team win. We knew that Kent State had a high-powered offense, and we knew it was going to take all four quarters. We just played until the last whistle.”

After finishing with a single-game school record of 515 team rushing yards, Buffalo’s offensive line deserves a ton of praise, but for more than just run blocking. The Bulls’ big guys up front have still yet to allow a sack through four games this season, and haven’t allowed one in eight-straight games back to last year.

With the victory, the Bulls are 4-0 in MAC play for the third time in team history and sit atop the MAC East Division, all alone in first place. With two games remaining, UB seemingly controls its own destiny and path to the conference championship game, which takes place on Friday, Dec. 18 in Detroit, Michigan.

The Bulls will look to improve to 5-0 and clinch a spot in the MAC title game next Saturday, Dec. 5 when they take on the Ohio Bobcats in Athens, Ohio. Kickoff between the Bulls and their MAC East rivals is scheduled for 3:30 p.m. EST. The game will be televised on CBS Sports Network.

You can also listen to the action, along with pregame and postgame coverage on the radio home of the UB Bulls – ESPN 1520.