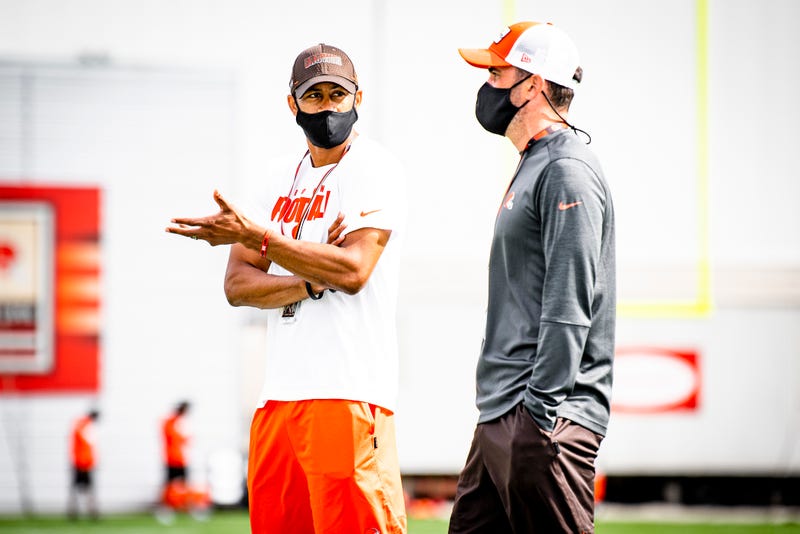 Magazine covers, feature stories galore and wall-to-wall coverage of the team on NFL Network and ESPN.

It was another bitter lesson that Browns owners Dee and Jimmy Haslam took to heart, but they are once again hopeful they found the right combination to lead the franchise back to the playoffs, be it this year or next.

“I think we, probably all of us, including ownership, learned a lesson last year about tempering expectations,” Jimmy Haslam said. “I do not think we managed that as well as we should have. I think you have to be realistic. This team has not been to the playoffs since 2002, and we are in a tough division. Baltimore and Pittsburgh are arguably two of the best teams and best franchises. I think you have to be realistic there.

“We are still a young team. On the other hand, we feel really good about Andrew and Kevin, our coaching staff, our personnel group and the talent that we have been able to assemble. We are excited going into the year but realistic.”

The Haslams received another round of backlash from fans and media after switching out their general manager and coach for the fifth time since they bought the team seven years ago following a 6-10 finish in 2019.

Once again, they believe they got it right by bringing back Andrew Berry to run the football operation and Kevin Stefanski to coach the team.

“It is a lot more fun. Paul DePodesta goes in that group, too – three really smart, really capable individuals, low ego and who just want to win and want to do it in the right way,” Jimmy Haslam said. “It was amazing for us to watch the whole draft process – like I said, time will tell in three, four or five years how well we did – and how well everybody worked together. We are excited about it. We have not played any games yet, but we are excited about the group we put together. Hopefully, they will be here for a long time.”

Watching Berry and Stefanski navigate the offseason amid COVID-19 and flawlessly execute free agency, the draft and virtual program reinforced their belief.

“We talk at our business about RPRP – right people in the right place,” Jimmy Haslam added. “It has been a long, hard road, but we really think we have that in coaching, personnel, Paul with his strategic role and in players, whether it be Baker or whomever it might have. We think we have the right people in the right place. It is never perfect in the NFL and things happen, but we are really excited to see what this team can do this year.”

The Haslams’ comments came during their annual training camp availability in which they touched on a multitude of other subjects including giving Myles Garrett a whopping five-year, $125 million contract extension coming off a suspension.

“We spent a lot of time talking about Myles and his situation – a lot of time – because that is a huge contract,” Jimmy Haslam said. “I think most of you all know Myles, and Myles did something that was unbelievably out of character unfortunately. He paid for it dearly, and we paid for it dearly. We know him and his family well. We know the kind of person and the kind of man he is, and at the same time, we know the kind of player he is. We spent a lot of time thinking about it, but we are excited that he is going to be a Cleveland Brown for a long, long time. I think he will be back on the field in a few days, and it will be good to have No. 95 out there because he makes a hell of a difference when he is out there.”

Odell Beckham Jr. seems more at home with the Browns this year.

“We did an exercise with the team Friday night – the four H’s, which is your history, heartbreak, heroes and hopes,” Dee Haslam said. “Odell texted me and told me that he really related to a lot of the stuff. We had a great conversation about that. It just feels like he is just so much more comfortable here, and he said that. He says ‘I am in my home. I am more comfortable.’ I think it was a transition, but I think he is doing really well and love the fact that he is talking about how happy he is to be here and how comfortable he is.”

This offseason the Haslams renovated the complex in Berea again, this time to retrofit it for COVID-19 protocols including expanding meeting rooms, modifying player facilities, adding a second locker room and temporarily relocating the weight room to the Casey Coleman Fieldhouse to make way for that additional locker room.

They're not done either.

“We continue to make improvements at Berea to make it a better place, first of all for our players and everybody who works there, but over time for our staff and our fans,” Jimmy Haslam said. “We are continuing to accumulate property there that will give us flexibility going forward to have all kinds of different options.”

Meanwhile, the planning for FirstEnergy Stadium’s future is on hold, for now.

“The downtown area and the downtown stadium are so important for the City of [Cleveland],” Dee Haslam said. We have some time there to think through that, and right now during COVID, I think everything has been kind of put on hold. There is just not a lot of conversation really to talk about. Right now, what we are talking about is how we get fans in the stadium and how we open downtown. That is our focus right now.”

While where the Browns will play at the end of the decade has to be put on the back burner out of respect for the current situation, a new stadium is rising in downtown Columbus for Crew SC of MLS, which is owned in part by the Haslam Sports Group.

“Thankfully, outside construction work has been able to go on so our Crew stadium in the Nationwide District of Columbus is on schedule,” Jimmy Haslam said. “It will open in June [2021]. We will play our first game there in early July. Steel is starting to come out of the ground so that is actually really exciting.”