Given the injury-induced decimation the 49ers have experienced at many positions on the offensive side of the ball, it's pretty crazy that they're still in the playoff race heading into Week 13. Of course, the expanded playoff format helps, and a cancellation of games in the remaining schedule could force that format to expand even further. However, seeing as Jimmy Garoppolo has been injured and ineffective (6 games, 3-3 record, 7 TD, 5 INT, 2 fumbles), and Nick Mullens has been even less productive (5 games, 2-3 record, 6 TD, 7 INT, 4 fumbles), a potential playoff berth is undeniably impressive.

Now, imagine this 49ers team with Matt Stafford. Does it get a whole lot better? Is it any worse? Are they still a middling team, regardless of injuries and the COVID-19 situation? Are they a lock for the playoffs at this point in the season?

The ceiling is even higher than that last hypothetical, according to one anonymous offensive coach, who told NFL writer Mike Sando that the veteran quarterback would change the trajectory of the Niners in a big way.

“They would win a Super Bowl,” the offensive coach said. “Stafford would be in a real organization finally. He would bend to Shanahan and that offense because there is such a history of success with that system. And Stafford would know he’s not going to get hit in the head all the time like in Detroit.”

Tim Kelly of RADIO.COM Sports expressed a similar sentiment when evaluating the future of the 49ers' signal-caller back in October. 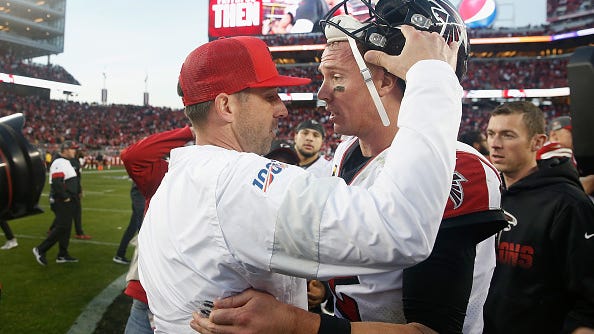 "There's been a feeling from many NFL observers that Stafford is a Hall of Fame caliber talent that's been held back by an organization whose deep-rooted issues predate his arrival," Kelly wrote. "If he was paired with Shanahan, it's not hard to imagine Stafford hoisting a Lombardi Trophy."

Of course, two issues that may not be as deep-rooted as the ones Kelly was referring to were dealt with this past week, as both head coach Matt Patricia and general manager Bob Quinn were fired by the organization following a characteristically sloppy Thanksgiving showing. Could this dismantling of the franchise's core also mean that an eventual Stafford departure is more likely? Would the Lions be willing to take on the mega dead cap hit of nearly $25 million and search for another quarterback solution, whether in the short or long term? And are the Niners salivating at the opportunity, or are they sticking with their guy in Jimmy G?

There are a lot of variables in play, but there's an equal amount of intrigue. According to at least one coach, it's a Super Bowl's worth of intrigue.

music
YUNGBLUD and Machine Gun Kelly are back on blistering 'acting like that'
music
Does the Salt-N-Pepa biopic really tell all?
news
First Black Secretary of Defense, Lloyd Austin, confirmed
music
Garth Brooks got some glam from Lady Gaga's makeup team before Inauguration Day performance
music
The New York Times is taking on Britney Spears and we're here for it
music
Lady A get the latest invite to the Grand Ole Opry