Jets quarterback Sam Darnold suffered both injury and insult last week at the hands of the the Denver Broncos.

Darnold dazzled early in the Thursday Night Football game with a nifty career-long 46-yard scramble for a touchdown, but he left the game on the Jets' next possession when he was wrapped up and slammed down on a questionable spin-o-rama sack by Broncos linebacker Alexander Johnson. 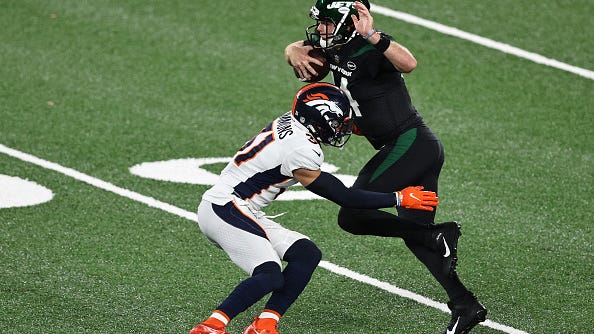 Darnold was briefly spelled by veteran backup Joe Flacco, but later returned to the game. He appeared to play through pain despite what was later diagnosed as a sprained throwing shoulder, and earned plaudits for both his toughness and overall performance under tough circumstances in yet another ugly Jets loss.

After a 46-yard TD run, Sam Darnold is injured following this sack

Prayers up for Darnold 🙏🏽 #TakeFlight pic.twitter.com/esZAkuoEVL

But now, Darnold's status for Week 5 is up in the air.

The third-year pro on Monday said he wasn't sure if he'll be able to practice with Gang Green when their work week begins on Wednesday.

“It’s not something I’ve decided," Darnold told reporters on a conference call. "It’s how I feel on that day. I’m going to go about it day-by-day. I want nothing more than to be out there with the guys playing football on Sunday. Practicing is a huge part of it.”

Darnold said he has been resting the shoulder since Thursday night, and hadn't even attempted to throw a ball yet.

Some observers on social media suggested it was irresponsible to reinsert Darnold into the game after he was shaken up and in pain, but the USC product said it was an easy decision once he was cleared.

“Once I got hurt and the doctor said I could go back there if I wanted to, there was no question."

A report by the New York Daily News on Tuesday suggested the Jets will in fact keep the 2018 first-round pick on the sidelines for their game against the Arizona Cardinals, setting the stage for Flacco to make his first start with New York.

While an official announcement is unlikely in the offing before at least Wednesday, it appears to be the prudent move. With the Jets' season all but circling the drain, they have little reason to push Darnold back into the lineup -- except to continue evaluating his performance over the rest of the season for the purpose of deciding whether he should remain part of their future plans.