There were a lot of victims of the early 2010s Legion of Boom in Seattle.

Quarterbacks didn't fare too well. From 2012 to 2014, when the Seattle defense was arguably at its most dominant. Some opposing signal callers simply had no chance. In two starts, Arizona's John Skelton threw for 223 yards, no touchdowns and five interceptions in 50 attempts. Eli Manning had one touchdown, but compared to six picks that number isn't all that impressive.

Colin Kaepernick, then the starter for the 49ers for much of the Legion of Boom's reign, had similar struggles, going 2-4 in six starts and firing two touchdowns and seven interceptions. He only completed about half of his passes.

One of those incompletions came in Week 16 of 2012, with the Seahawks already up two scores toward the end of the first quarter. With the end zone in sight and a desperate need to get points on the board, Kaepernick heaved a ball downfield to star tight end Vernon Davis.

It's this very play that came to Davis' mind when he was asked about the biggest hit he ever had to endure throughout his playing days on Bob Menery's "Zapped" podcast.

Though Chancellor wasn't fined for the vicious hit, we have to think he would have been under the current rules of the NFL.

"It was helmet to helmet, ground to ground," Davis said with a laugh. "...As soon as he hit me, I just went down so fast. I think my head hit the ground... I think it did. It was just so fast man. He hit me so hard, so fast, when you watch it you're gonna be like, 'Woah.' "

'Woah' was certainly my reaction. Even with all the other massive hits that I've seen, this one just seemed to flatten the hulking figure of Davis in the blink of an eye.

I can't blame him that he decided to retire following the 2020 season and move on to a slightly less violent activity as he enters his late 30s. 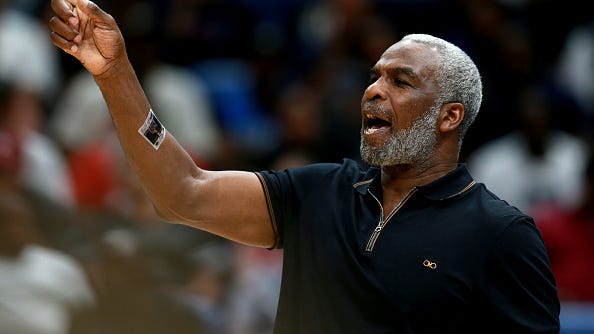 Charles Oakley, Vernon Davis to Appear on 'Dancing with the Stars'