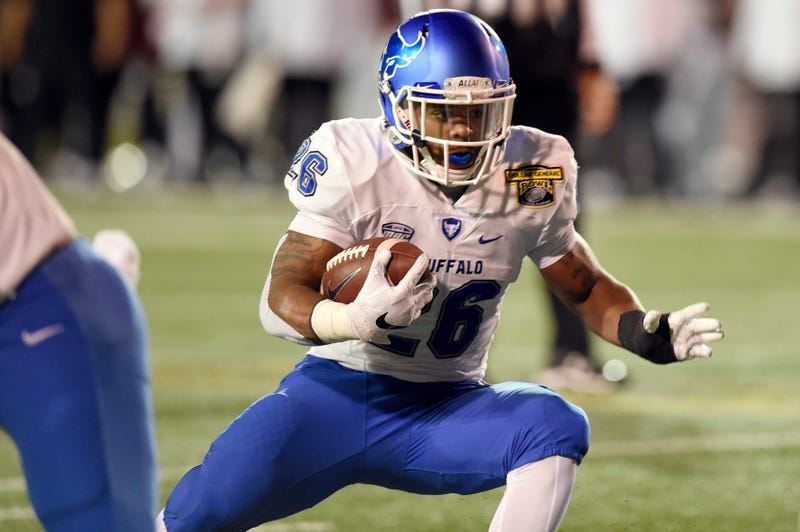 University at Buffalo running back Jaret Patterson is a player Bowling Green’s football team was certainly familiar with prior to Tuesday night’s matchup at Doyt L. Perry Stadium in northeast Ohio. The junior ran all over the Falcons last season when they came to UB, totaling 298 rushing yards and six touchdowns in a Bulls win.

Two of Patterson’s scores highlighted a trio of Bulls’ rushing touchdowns in the first half that gave UB a commanding 21-3 lead at halftime. The junior added another pair of touchdowns in the second half, including a 57-yard dagger with 2:08 to go, which put the game out of reach after the Falcons cut the score to 35-17 after the Bulls led 35-3 going into the final quarter.

With the 300-yard rushing performance, Patterson became only the 13th player in MAC history to run for at least 300 yards in a single game. In his three career games against Bowling Green, Patterson has ran for 687 total yards and 12 touchdowns.

What a night for Jaret Patterson who not only moves into second place on UB's all-time rushing list, but becomes the first player in the nation this year to rush for 300 yards in a game#UBhornsUP pic.twitter.com/niWkgRi8Ei

Kevin Marks also had a solid rushing performance, despite only getting four carries in the second half. The junior ran for 90 yards (85 in the first half) on 15 carries and scored a touchdown in the second quarter.

Buffalo quarterback Kyle Vantrease also ran for a six-yard touchdown late in the third quarter to extend the Bulls’ lead to 35-3.

Coming off last week’s four-touchdown, 353-yard passing performance from Vantrease, an effort that earned him MAC East Offensive Player of the Week honors, the Bulls didn’t attack through the air very often against the Falcons. Vantrease finished just 7-for-12, throwing for only 74 yards.

Antonio Nunn caught nearly every pass thrown by Vantrease on Tuesday. The senior receiver reeled-in six balls for 70 yards. With all of Buffalo’s scores coming via the run, Nunn’s streak of consecutive games with a touchdown reception ends at three.

Despite a couple of touchdowns in the fourth quarter when the Bulls were ahead by a comfortable margin, the defense played another solid game, considering the group was also missing five starters (defensive end Taylor Riggins, tackle Ronald McGee, safety Tyrone Hill and cornerbacks Aapri Washington and Ali Abbas).

After Bowling Green totaled more yards than UB in the first quarter, finishing with 115 compared to the Bulls’ 86, the Buffalo defense turned things up a notch, holding the Falcons to just 55 yards in the second quarter, with 33 coming on one pass play in the final two minutes before halftime.

The Bulls defense also forced its seventh turnover through three games this season. Safety Marcus Fuqua intercepted Bowling Green quarterback Matt McDonald in the end zone late in the third quarter, thwarting, what looked like, a scoring drive for the Falcons, who were already trailing 28-3 at that moment.

Speaking of sacks, Buffalo’s offensive line has done a great job keeping their quarterback from getting hit. Not only have the Bulls not allowed a sack in three games this year, but also they’ve now gone seven straight games, dating back to last season, without allowing a sack. That seven-game stretch ties the longest streak by a MAC team since Toledo went seven consecutive contests without allowing a sack in 2015.

It should be noted that Bowling Green, a team that has had enough troubles already this season, was shorthanded on the sideline. The university’s athletic department announced Tuesday that five assistant coaches would miss the game due to COVID-19 protocols and contact tracing. For a now 0-3 team with 64 freshmen on its roster, that has given up 142 total points through its first three games, less coaches being available was certainly the last thing they needed, especially against this talented UB team.

With the victory, the Bulls improve to 3-0 on the season and have now won their last four games against Bowling Green. This also marks the third time in school history that UB has started 3-0 in conference play. Buffalo got off to a 6-0 start in the MAC back in 2018, along with a 5-0 start in 2013.

The Bulls remain tied at the top of the MAC East with Kent State as the Golden Flashes improved to 3-0 Tuesday evening with a 69-35 win over Akron.

Buffalo and Kent State will meet in a battle of the unbeatens at UB Stadium next week. The Bulls host the Golden Flashes on Saturday, Nov. 28 with kickoff scheduled for 12 p.m. EST.

The game will be televised on CBS Sports Network.

You can also listen to the action, with pregame and postgame coverage on the radio home of the UB Bulls – ESPN 1520.