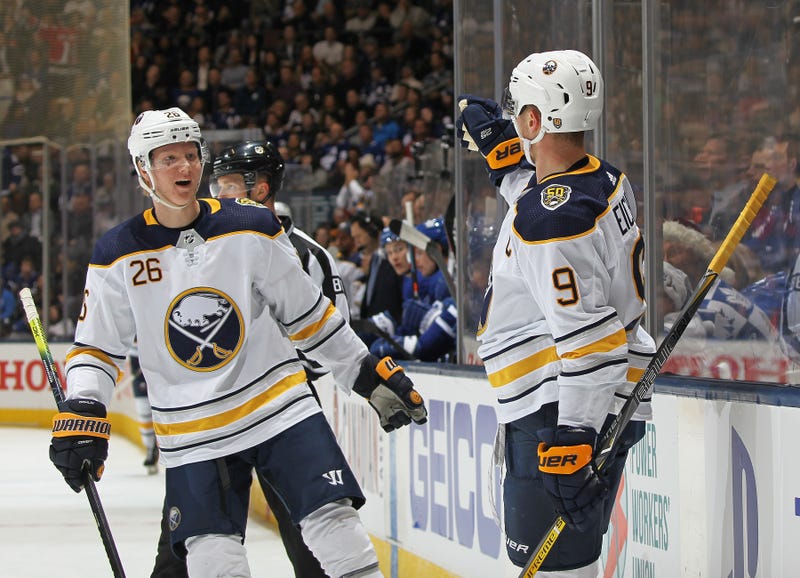 There's no denying that the Buffalo Sabres have some of the best young talent on their roster in the entire National Hockey League. The problem, for years, has been that the team has struggled to string together enough success to get into the playoffs for the first time since 2011.

It all starts up front with captain Jack Eichel, who continues to put up season-after-season of career-high marks with the Sabres. This past season saw the 24-year-old score a career-high 36 goals in just 68 games. If the 2019-20 season had not been shut down due to the COVID-19 pandemic, Eichel was on a pace to finish the year with 43 goals and 50 assists for 93 points.

Right behind Eichel, on the blue line, is former first overall pick in the 2018 NHL Draft, Rasmus Dahlin. The 20-year-old just wrapped up his second NHL season, where he scored four goals and put up a career-high 36 assists in 59 games. Had Dahlin's season not come to a premature end due to the coronavirus, he was on a pace to end the year with five goals and 44 assists for 49 points.

Both Eichel and Dahlin found themselves ranked as some of the best players in the NHL under the age of 25 on Monday, according to NBC Sports' Pro Hockey Talk. In their NHL Power Rankings of Top-25 players under the age of 25, Eichel is listed as the seventh-best player on the list, while Dahlin came in ranked 23rd.

Pro Hockey Talk ranked Edmonton Oilers captain Connor McDavid as the NHL's best player under the age of 25, though he's arguably the best player overall in the NHL to date.

The TOP 5 players under the age of 25 according to the @ProHockeyTalk writers.

There certainly can be arguments made for Eichel to come in higher on this list. While McDavid stands alone at the top of any list, Eichel has proven to be as good of a playmaker and as effective of a goal scorer as any of the players ahead of him on the list. However, as Pro Hockey Talk points out in their rankings:

"His team has stunk, but that is not his fault. He is one of the league’s best players and it is going to be fascinating what he can do with Taylor Hall on his wing this season."

As for Dahlin, he comes in on the list as the sixth-best defender under the age of 25 behind players like Heiskanen, Charlie McAvoy (Boston Bruins), 2020 Calder Trophy winner Cale Makar (Colorado Avalanche), Quinn Hughes (Vancouver Canucks) and Zach Werenski (Columbus Blue Jackets).

"If he becomes the player everyone thinks he can be, that would be massive for a Sabres team that desperately needs a superstar on its blue line. [We] think he can be that player."

Dahlin was the first overall pick of the Sabres in 2018 after being touted as one of the best defensive prospects to enter the NHL Draft in decades. While his production has not been that of players like a Makar or Hughes to start his NHL career, many have put him on a similar career projection of Lightning defenseman Victor Hedman, who has been a finalist for the Norris Trophy as the league's best defenseman for four straight years. Hedman has one Norris Trophy under his belt when he won the award after the 2017-18 season.

It is likely that with an even bigger step in his overall game this upcoming season, Dahlin will find himself climbing the rankings in no time.

music
Dave Chappelle tests positive for COVID-19
news
How Kamala Harris’ historic VP role will impact the future of American politics
news
Is it safe for vaccinated people to socialize with each other?
news
People are getting into legal trouble for owning Elon Musk’s 'Not a Flamethrower'
news
Many patients must fight fear of needles before taking on COVID-19
music
'Saved by the Bell' star Dustin Diamond completes 1st round of chemotherapy for stage 4 lung cancer