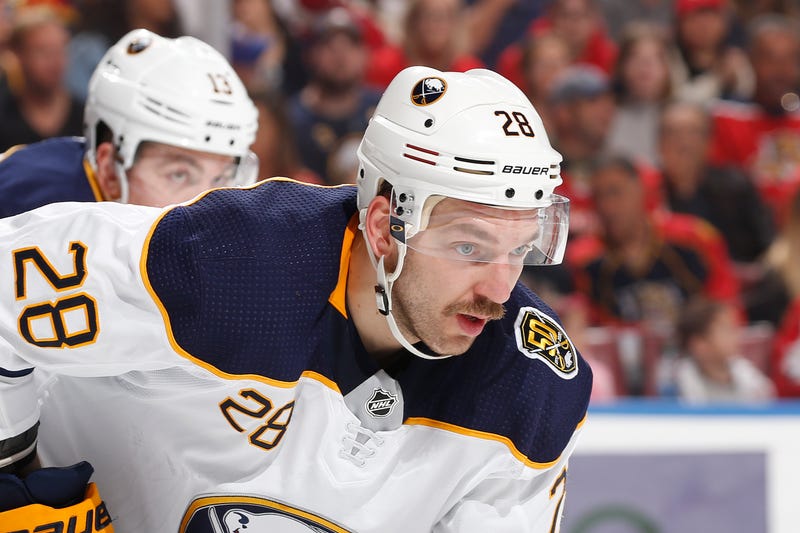 It appears as though Zemgus Girgensons' 2020-21 season is over before it even began.

The Buffalo Sabres announced on Wednesday that Girgensons has undergone successful surgery to repair a hamstring injury suffered on Monday in the team's first scrimmage of training camp. His expected timeline for recovery is approximately six months, which would get him ready to return in early July.

The Sabres have announced the following update regarding forward Zemgus Girgensons. pic.twitter.com/7RrS6bKDse

The 27-year-old winger suffered the injury in the second period of Monday's scrimmage as he went to stick check camp invitee Riley Sheahan off the puck. As he went to poke the puck off Sheahan's stick. Girgensons ended up getting bumps and awkwardly turning his body to try and catch himself. However, he ended up going down to the ice, and would need help to get up and eventually get down the tunnel to the locker room.

The only way Girgensons could make a return to the lineup at any point this season is if the Sabres make a deep run in the Stanley Cup Playoffs. The 56-game regular season stretches from Jan. 14 to May 8 for the Sabres, and the last possible day of the Stanley Cup Finasl is scheduled to take place on July 9.

Girgensons is coming off a season in 2019-20 where he performed well with 12 goals and seven assists for 19 points in 69 games. It was his best goal and point production in the league since his second season with the Sabres in 2014-15, where he scored 15 goals and registered 30 points in 61 games.

In the offseason, Girgensons signed a three-year contract extension with an annual average value of $2.2 million to remain with the Sabres instead of becoming an unrestricted free agent.

Girgensons is the longest-tenured member of the Sabres after being drafted by Buffalo in the first round (14th overall) in the 2012 NHL Draft. He made his NHL debut in the 2013-14 season, where he appeared in 70 games, scoring eight goals and adding 14 assists for 22 points. Over the course of his seven-year career, Girgensons has registered 138 points (61+77) in 489 games.

Thank you for all the well wishes! I was really looking forward to this season, so I’m very disappointed to miss it. We have a great group of guys in Buffalo and I can’t wait to see my teammates do well this year! I look forward to be being back on the ice as soon as possible.

In the first few days of training camp before the injury, Girgensons was skating on a line with newcomer Cody Eakin, as well as Kyle Okposo on the right wing. Skating on that line in place of Girgensons on Wednesday was another newcomer in Tobias Rieder.

Here are the #Sabres lines this morning: