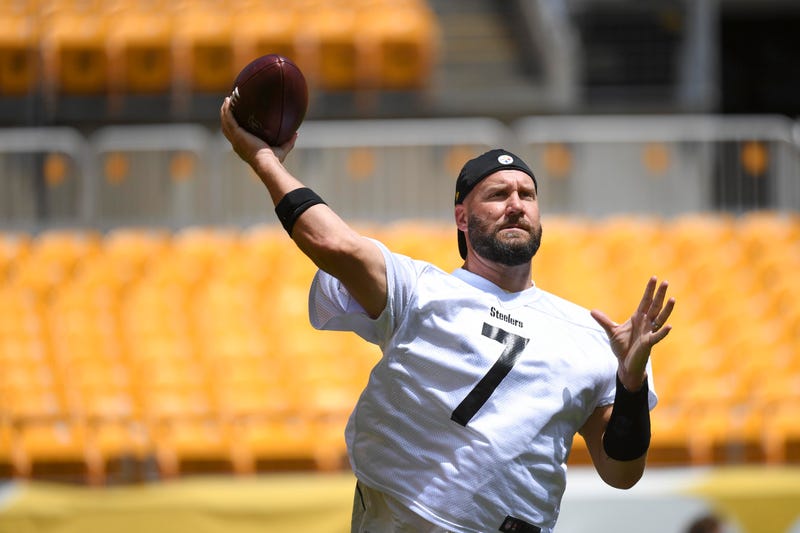 Here are five stories from the week in Pittsburgh sports with some of my spin on it as well. Check out the Fan Early Morning Show from 5-5:40 am Monday thru Friday or the podcast page if you’re not an early riser.

5. Dude Jumps In The Allegheny For A Foul Ball

STORY: Yep. If you missed it, you need to know about it. It was early in the game on Tuesday when Gregory Polanco blasted a ball foul over the Clemente wall and into the river. Two men along the river walk saw this, one man wasted no time in stripping down and jumping right in for it.

This guy jumped in the Allegheny for a foul ball. Would you? pic.twitter.com/nNcyRC2Bvk

SPIN: First off, Polanco’s batting average sorely NEEDED that ball to stay fair and would have really jumped if it had. Currently he’s 3 for 43(!!!) on the season for a sparkling .070 average. Secondly, this man may have put forth the best effort at PNC Park all season long. Virtually no hesitation, sees the ball bounce into the water, does what he needs to do in clearing his pockets, takes the shirt and socks off and hops right in there. Fearless. Dedicated. Got his five minutes of fame. Yeah, yeah I know it was a foul ball. But he probably didn’t know. That’s next level commitment right there.

STORY: After the first day of padded practices at Heinz Field Monday for Steelers training camp, both JuJu Smith-Schuster and Cam Heyward talked about their pending contract situations. Heyward said he doesn’t know what to think right now and that it is uncertain whether he will receive a new deal after the season or during this offseason. JuJu took a different tact, saying that he isn’t worried about his contract right now.

SPIN: This is the underlying theme to the entire 2020 season for the Steelers. There are a lot of expiring contracts and not enough money to keep everyone around, especially with a flat or shrinking cap coming in 2021. Cam Heyward, Al Villanueva, Bud Dupree, JuJu Smith-Schuster, Matt Feiler, Mike Hilton, Chris Wormley, James Conner, Tyson Alualu andCam Sutton are all notable players that have contracts that expire after this season.

I think Heyward and JuJu both took the correct approach in how they talked about their situations, even if handling them differently. Heyward is putting a bit of pressure on the Steelers and he has earned the right to do so. He doesn’t want to go anywhere but deserves a fair deal for his play and leadership. In JuJu’s case, coming off a disappointing season, he should be focusing solely on football. He’s got work to do to earn that next contract and he knows it.

I think the Steelers find a way to keep Heyward around. I get the feeling that there’s about a 75% chance this is JuJu’s final season as a Steeler.

STORY: Benny Snell showed up to camp 12 pounds lighter, slimming down to 212 lbs. He said he followed the offseason plan the Steelers gave him and transformed his body for the 2020 season.

SPIN: The Steelers gave this plan to him and he just followed it, maybe it’s as simple as that. But to me, this is a public and visual statement of, “I want to be the feature back. I don’t just want to be your third down or goal line guy, I want to be the 20-25 carries for 100 yards and a couple touchdowns guy.” And I love it. This follows the same philosophy in terms of body makeover that Le’Veon Bell and James Conner went through before him. I think it serves better in the long run and shouldn’t take away from the punch he packs as a physical runner.

I’m high on Snell. I think he could become an NFL starter someday.
Who knows, if Conner slips up or gets injured again, that someday could be very soon. At the very least, it’s an intriguing one two punch heading into the year as long as Mike Tomlin allows them to be and doesn’t just ride his bell cow #1 back (Conner in this case) like he’s done in the past.

STORY: The Pirates sank to 4-17 on the season after losing all three games to the Indians at PNC Park this week. They were outscored 14-4 in the series.

SPIN: Give them credit for this, they found different ways to lose each night. Tuesday’s was a real gem. Jarrod Dyson got picked off 2nd base in the 9th inning with 2 on and no outs that effectively killed the rally. In the 10th, Carlos Santana hit a moonshot that went over the foul pole that was ruled a fair ball after a lengthy review. Wednesday, Steven Brault gave a heck of an effort, throwing 5 scoreless innings before the bullpen did what they do and gave up 6 runs from there to lose 6-1. Then Thursday, the offense completely disappeared and was dominated by Shane Bieber who’s now 5-0 on the season. Check this out….

Bieber’s 5 wins are more than:

STORY: Tight end Vance McDonald took the time to talk up his quarterback this week, saying he is throwing the ball with zip and also noticing a hunger and desire to win a championship like he’s never seen from him before. Ryan Switzer said Ben looks great as well. Multiple reporters who have seen him in their own eyes like NFL Network’s Aditi Kinkhabwala and the Pittsburgh Post-Gazette’s Ray Fittipaldo have corroborated Roethlisberger’s sharpness.

SPIN: Hard not to be all aboard the Big Ben hype train these days.
I’ll admit it. I’ve given in. All I needed to see and hear was that he was healthy and ready to go and I’m believing that we’re in for a big year from #7. Here’s why I don’t think it’s a totally homer take.

-He told Ron Cook a month or so ago that he now has no pain his elbow or throwing arm, something he couldn’t necessarily see in year’s past.

-He’s back to being slim Ben, looking like he’s in great shape.

-As much as he didn’t look good at multiple points last year without Ben, he’s got his go-to man in place as the offensive coordinator.
Randy Fichtner is his guy.

-He doesn’t have any whiny receivers around to cater to. They’re young but they aren’t challenging him for control. Remember before the season last year when he said he suddenly loved football again?

-I’ll buy what Vance McDonald is selling about his hunger to win.
I think he saw how much he was needed last year and it killed him to watch

-He understands the opportunity he has in front of him to be the hero and I think he delights in it. To ride in and save the Steelers from 8-8 misery. And who wouldn’t relish that?