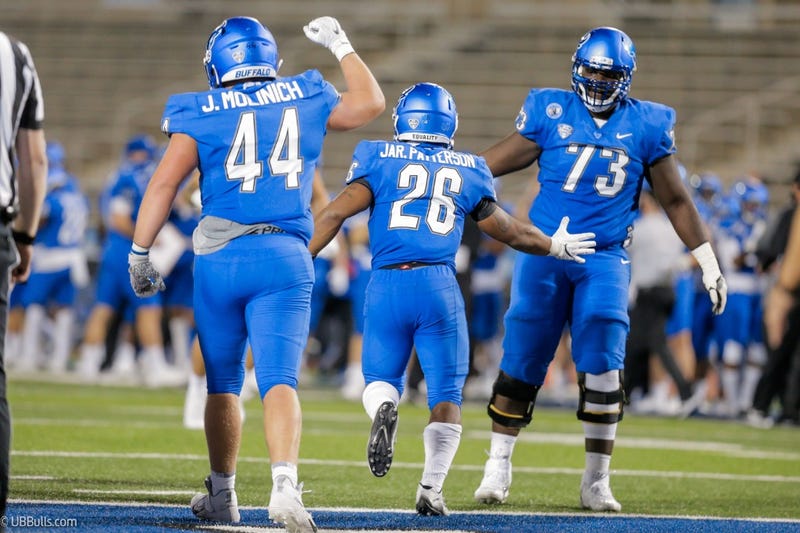 With both teams off to 3-0 starts, the upcoming clash between the University at Buffalo Bulls and Kent State Golden Flashes at UB Stadium on Saturday has the makings to not only be an exciting matchup, but also play a huge role in the Mid-American Conference East Division race, especially with only a few games left in this shortened six-game regular season.

Buffalo and Kent State, the only two remaining undefeated teams in the MAC East, currently sit atop the standings tied for the division lead. With only two games left on the schedule before the postseason following Saturday, a win would certainly put the victor in the driver’s seat when it comes to winning a division title and earning a spot in the conference championship game on Friday, Dec. 18 in Detroit, Michigan.

Taking control of their playoff chances is likely the Bulls’ priority. However, one wouldn’t be crazy to think that last season’s loss to the Golden Flashes in Ohio may still be on some players' minds. Buffalo took a 24-6 lead into the fourth quarter and led by as much as 21 points in the final eight minutes before Kent State scored three unanswered touchdowns and a kicked a game-winning field goal as time expired to come away with a 30-27 victory.

“I think everyone knows [about the loss last year],” Buffalo head coach Lance Leipold said during his weekly Zoom conference call on Tuesday. “It’s part of our film watching. Finishing, playing four quarters, being alert, special teams, sustaining momentum, all those things are constantly talked about. But, to sit there and dwell on it, it’s not going to make it. We’ve acknowledged it, and I think that the guys that were in the game, they remember it and want to make sure we don’t have any repeat performances.”

Leipold and co. have seemingly by no means “dwelled” on the loss. Buffalo has won six consecutive games dating back to that stunning defeat last fall, winning each of the three contests this season in decisive fashion.

Teams don’t win games consistently without good performances from multiple players in all phases, which the Bulls have gotten. Much of Buffalo’s success, however, can be credited to running back Jaret Patterson, who once again moved his name further up the UB record books and possibly onto more pro teams’ draft boards last week.

Patterson ran for a school-record and career-high 301 yards and four touchdowns last Tuesday in a 42-17 win over Bowling Green. Through three games this season, the junior has already rushed for 511 yards and eight touchdowns (both the highest in the MAC).

With Patterson’s eye-popping numbers, Buffalo’s running game is currently amongst the best in all of college football.

The record-breaking performance (and first 300-yard rushing game from any college running back this season) earned Patterson MAC East Offensive Player of the Week honors for the second time this year. Ironically, his twin brother James took home Defensive Player of the Week, as well after registering a career-high 13 tackles and a pass break up in the victory over Bowling Green.

Similar to Buffalo, Kent State’s rushing attack has been its bread and butter. The Golden Flashes boast the top-ranked run offense in the MAC and second-highest in the country, averaging 299 yards on the ground per-game (UB ranks second, averaging 260 rushing yards per-game). Marquez Cooper leads the Golden Flashes in rushing this season with 234 yards and five touchdowns through three games. There are a couple of other options behind the freshman running back as well. Including Cooper, four Kent players have rushed for over 100 total yards already this season, and have each carried the ball 20-plus times.

Quarterback Dustin Crum is another player to watch on the offensive side of the ball for the Golden Flashes. The senior has put up impressive numbers so far this season, completing 61-of-81 passes for 838 yards and nine touchdowns with just one interception. With 194 rushing yards on 31 attempts and three touchdowns, Crum is a threat on the ground as well.

“[Kent State] has probably the best quarterback in the conference,” Leipold said when speaking on Crum and the opposing offense. “Dustin Crum has played extremely well these last few years. He has a great command of their offense. He’s a running threat. Very accurate.”

The Golden Flashes’ offense, as a whole, has put up some crazy numbers this season. Kent State's 616 yards per-game currently ranks as the highest average in all of college football. Following back-to-back contests in which they put up 60-plus points, the Golden Flashes also rank first in the country in scoring, averaging 52.7 points per-game. With Buffalo’s average of 44.3 points per-game, good for third-best in the MAC and ninth in the country overall, Saturday’s meeting could be a high-scoring affair.

Despite both units having their work cut out for them this weekend, both UB and Kent State’s defenses have performed well. Buffalo’s defense ranks first in the MAC in points allowed, averaging just 19 points against per-game; with Kent State ranking fourth, giving up 27.3 per-game.

The matchup between the Bulls’ offensive line and Kent State’s pass rush will also be something to watch throughout the afternoon. The Golden Flashes lead the MAC with 11 sacks through the first three games, while UB has not allowed a sack yet this season. Bulls aren’t just the only team in the conference to not give up a sack in 2020; UB hasn’t allowed one in its last seven games dating back to last year.

You can hear more from Leipold on Saturday's matchup as he joined Howard Simon and Jeremy White on Tuesday morning on WGR:

Opening kickoff between the Bulls and Golden Flashes is scheduled for 12 p.m. EST on Saturday, Nov. 28. The game will be televised on CBS Sports Network.

You can also listen to the action, with pregame and postgame coverage on the radio home of the UB Bulls – ESPN 1520.