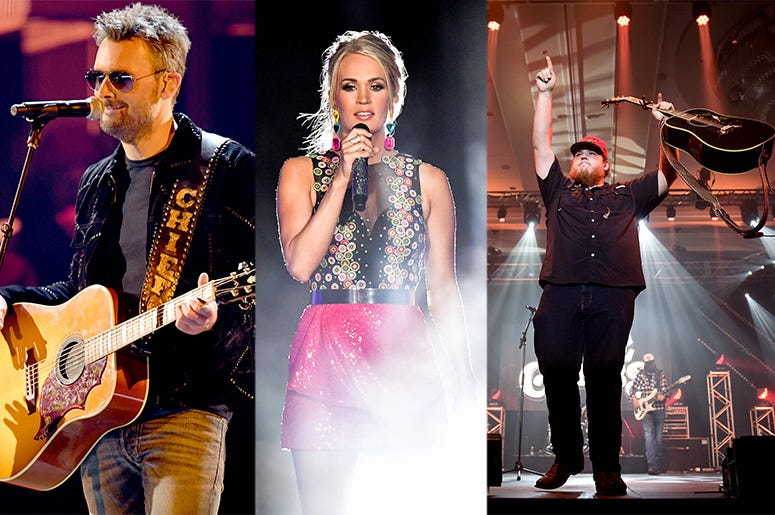 Country music’s biggest night is fast approaching and fans are eager to find out who wins Entertainer of the Year at the 54th annual CMA Awards.

The annual fall event broadcasts to homes across the country November 11, on ABC, with the iconic Grand Ole Opry House in Nashville, TN as a backdrop.

A complete list of nominees for the CMA Awards reveals some stiff competition amongst the nominees for the most prestigious award, Entertainer of the Year. Experts might vote on the winners, but we know the fans are always right.

Will Carrie Underwood continue dominating awards season? Is Luke Combs the new face of Country music? Does Keith Urban have the star power to seal the deal?

As we countdown the days to the 54th annual CMA Awards, we want to hear from you. Cast your vote below on who you think will win the Entertainer of the Year.

The shaded Country star walked away from the ACM awards empty handed, nominated for Entertainer Of The Year and Song Of The Year, but his recitation of Johnny Cash's "Ragged Old Flag" made a statement about the state of Country music and the United States. Will he come up big at the CMAs?

Is there anyone hotter than this big drink of sweet tea? His debut album This One's for You spent 44 straight weeks at No. 1 on the Top Country Albums chart, breaking the male artist record. We also just dropped the deluxe edition of his sophomore effort. Did we also mention Luke's branded Crocs?

By now we've all fallen in love with Miranda's cool cop husband Brendan McLoughlin, but her "Bluebird" video captured the imaginations' of Country fans all over the world. Lambert is still riding high off her LP, Wildcard, and we can't wait to see what's next.

It's Carrie Underwood, ok? Excluding her for any awards conversation should be a federal crime. She's a treasure! After tying for the award at a show earlier this year, the "Cry Pretty" singer might walk away with one all to herself this time around.

The man affectionately referred to by his wife as "Suburban" has notched a big year in Country music. He's collaborated with genre crossing artists and lent his time to charities during COVID-19. With a new album released in September, is Keith set to take two out of three?