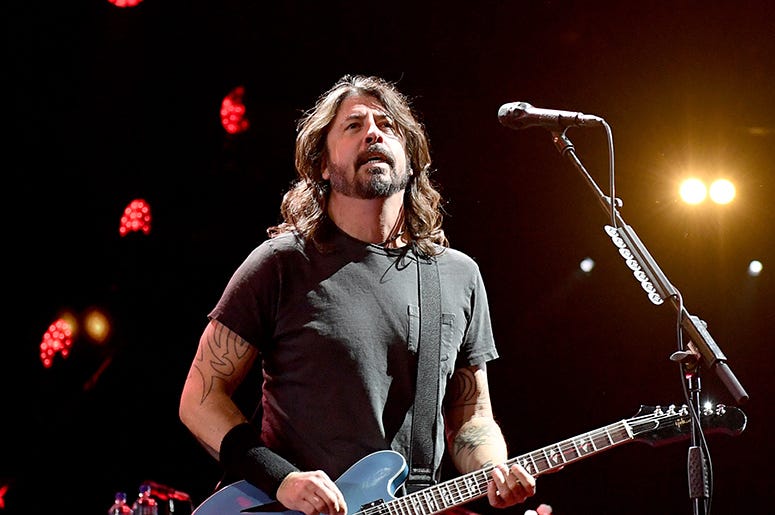 Those classic Nirvana tracks that you return to on a near-constant basis are the same ones that former drummer Dave Grohl finds himself feeling "bittersweet" about.

In a new interview with Classic Rock Magazine, for which he is currently filling the role of guest editor, the Foo Fighters frontman says that while he still enjoys filling his proper role behind the set on Nirvana classics, the idea of singing them brings a whole other emotion.

"I wouldn’t feel comfortable singing a song that Kurt sang," Grohl admits. "I feel perfectly at home playing those songs on the drums. And I love playing them with Krist and Pat and another vocalist."

The band has reunited with that particular line up in the past, most notably during their Rock and Roll Hall of Fame induction in 2014 which featured rocker Joan Jett, Sonic Youth's Kim Gordon, Lorde, and St. Vincent (Annie Clark) providing vocal duties.

Last year, Grohl's teen daughter Violet sang the In Utero classic "Heart-Shaped Box" when the band reformed briefly at the Hollywood Palladium, once again with St. Vincent and the addition of ALT-royalty Beck.

Looking back on the old days in Aberdeen, Dave says "When I first joined the band it was so much fun. I lived on the couch in Kurt’s living room, we rehearsed in a barn, we set up our gear and played those songs and people bounced around and got hot and sweaty. I really loved the connection and the appreciation that Nirvana’s audience had with the band."

"I still have dreams that we’re in Nirvana, that we’re still a band. I still dream there’s any empty arena waiting for us to play," Grohl says. "But I don’t sit down at home and run through 'Smells Like Teen Spirit' by myself. It’s just a reminder that the person who is responsible for those beautiful songs is no longer with us. It’s bittersweet."

If you want to hug Dave right now, you're not alone. Sending one your way virtually, buddy.