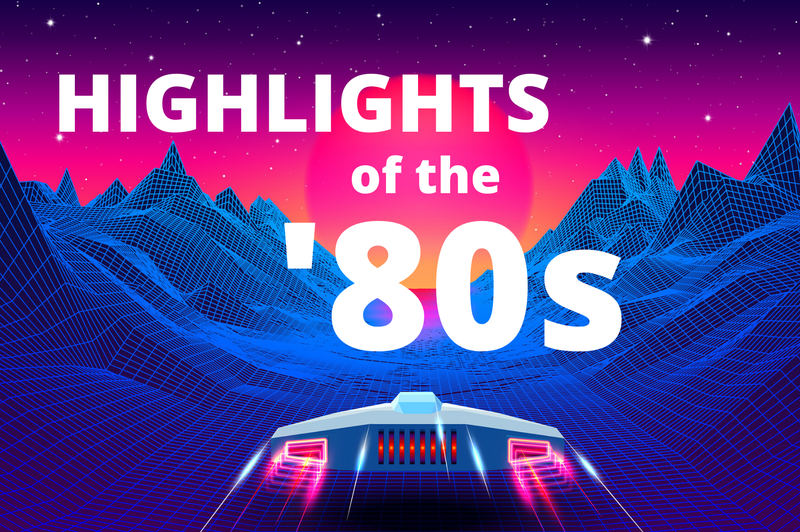 All Memorial Day Weekend long, we’re playing BLOCKS of music from every year of the '80s! It's the

The 80’s - Just some highlights (From Marilyn Russell)

Phillies WIN the world series…beating Kansas City 4-2, with the help of stars like MVP Mike Schmidt, Pitcher Steve Carlton and one of a kind Tug McGraw.

We suffer the unfortunate loss of John Lennon.

Pacman is the video game.

We got Post-It Notes and The Empire Strikes Back (Star Wars Episode V), Dallas and Rubik’s Cube.

We couldn’t get enough of Abba, the Police and David Bowie.

The Launch of MTV.

It’s the first year, we hear the word “Internet” and DOS is released by Microsoft. We also hear John McEnroe yelling feverishly at umpires…including “You Can’t Be Serious” at Wimbledon.

Raiders of the Lost Ark changes our lives in ways we can’t explain and we can’t get enough of Adam & the Ants, Bowie and Queen.

Both Epcot and Graceland open.

Time Magazine declares The Computer Man of the Year.

The Who & The Clash perform at JFK that summer with the Clash! One of the BEST Rock shows ever in Philly.

Michael Jackson and The Police dominate the charts.

We say goodbye to the TV Series “Mash.”

We buy a Swatch in every color. How many colors did you buy?

McDonald’s introduces the Nugget. How many have you eaten since '83?

In Philly in 1983, every new wave band plays at either Ripley (on South Street) Chestnut Cabaret, London Victory Club or Empire Rock club in Northeast Philly…there was still a Spectrum, movie theaters were everywhere downtown and The Sixers win the NBA Championship cause Moses Malone.

First year for MTV Music Awards (you probably remember Madonna’s “Like A Virgin”).

Prince gave us “When Doves Cry.”

Apple presents their Mac Computer in the now legendary 1984 Ad.

TV - Popular shows were Cheers/Family Ties/Knight Rider and The A-Team.

Live Aid - Biggest collaborative concert we’d ever seen, in Philly at JFK and in London at Wembley Stadium.

July 13th, 1985 Performers in Philly included Tina Turner, Hall & Oates, Mick Jagger, Eric Clapton, CSN&Y, Bob Dylan and Phil Collins. As legend has it, Phil Collins played both Philly & London flying by Concorde to make it in time for Philly show and the ill-fated Zeppelin reunion. Jack Nicholson was one of the Philly Hosts. The show raised money for famine relief in Africa.

Coke launched “New Coke” and everyone hated it…

Michael Jordon was Chicago Bulls “Rookie of the Year!” The rest of course is history.

The Hooters have a big hit with “When We Danced.”

We Are the World features everyone.

Michael Jackson buys the publishing rights for most of the Beatles Music.

And PMRC is formed to censor rock music.

And talk about a weird mish-mash of New Year’s Rockin Eve - performers include the Four Tops, The Judds, Barry Manilow, Tears for Fears, TheMotels and The Temptations…

Smoking is banned on all public transportation (planes/trains).

On TV we’re watching Dynasty, A-Team, Growing Pains and on the charts is all MJ, Robert Palmer, Lionel Ritchie and Whitney gives us “The Greatest Love of All!”

Mike Tyson becomes the youngest heavyweight champion in history and Pan Am Flight 73 is hi-jacked.

Red Bull changes our lives…yes we can now stay up all night long with Lionel Ritchie.

Even better - “The Simpsons” make their debut.

U2 gave us “Joshua Tree.” Heart gave us “Alone” MJ “Bad” and Whitney had a huge year with touring and “Wanna Dance With Somebody.”

Big Shows on TV “Roseanne” and “The Wonder Years.”

Rick Astley is “Never Gonna Give you Up.”

And Bobby McFerrin just wants us to “Don’t Worry/Be Happy.”

The most famous fictional character is Batman. Michael Keaton is “Batman”

Madonna upsets the Catholic Church with “Like A Prayer.”

The Bangles broke up but left us with an "Eternal Flame!"

The Berlin Wall comes down.

We meet the Energizer Bunny and become addicted to Tetris.

What were some of your favorite moments from the ‘80s? Tweet us @WOGL!