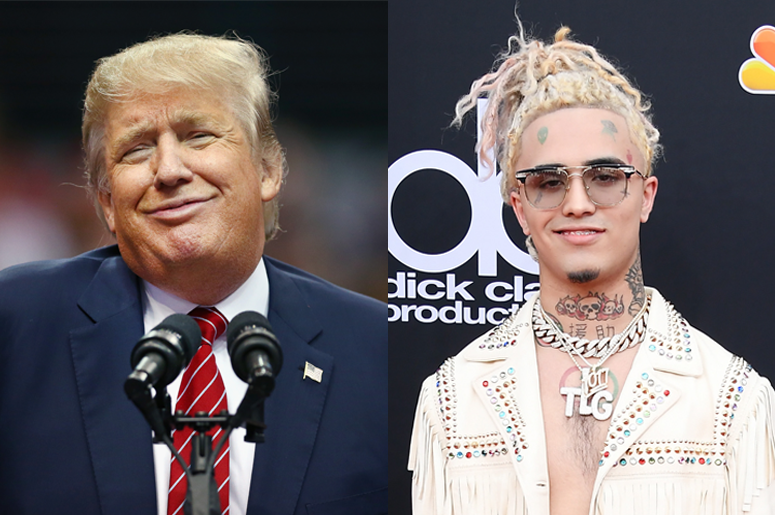 Last week Lil Pump was spewing his support for President Trump on social media, this week he upped the ante by attending his final pre-election rally.

At the late-night rally in Grand Rapids, Michigan, ahead of November 3rd, the president thanked the rapper and one of his newest high-profile endorsers by welcoming him up onstage but not before calling him the wrong name.

“I love your sound,” Trump told the crowd by way of introducing Lil Pump. “I love your music. And speaking of sounds, music, and other things — one of the big superstars of the world — Little Pimp. There he is. How is it going? You wanna come up and say something? Come on.”

Trump evidently realized his mistake and corrected it the second time around, and then complimented the "Gucci Gang" rapper on his hat, “does everyone know who he is? You know how big he is? Come up here, that's a nice hat.”

Lil Pump took Trump up on his offer and joined him on stage to address the crowd. “Hello, everybody,” Pump said after walking out. “How you guys feeling? I come here to say, Mr. President, I appreciate everything you’ve done for our country. You brought the troops home and you’re doing the right thing. MAGA 20, 20, 20. Don’t forget that.”

While the appearance of Lil Pump might seem as a last ditch effort to swing younger voters to the right, the rappers support of our current president is genuine. Besides vocalizing his dislike towards Joe Biden, Pump has since also threatened to leave the United States if the president lost the 2020 race to him.