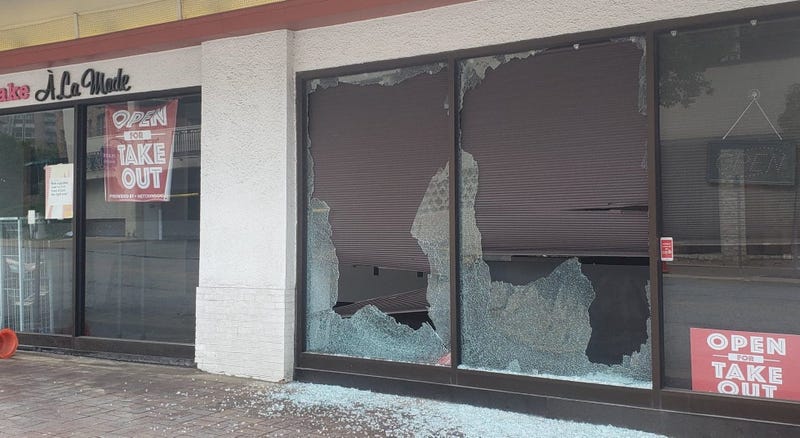 Police say they took aggressive measures after groups of people became violent, as some looting of stores in the shopping district occured and several storefront windows were smashed.

From last night: 85 arrests, significant damage to businesses on the Plaza. Nearly all officers hit with frozen water bottles or rocks. Two officers hospitalized from being struck - one with an injury to the temple and one with a lacerated liver.

One of the KCPD patrol cars was set ablaze during the demonstrations.

Images in #KansasCity on Saturday night from a @KCStar photog... https://t.co/uTiFzRQA7a

Saturday in #KansasCity... a hug. https://t.co/oGKeWB5vRP

Kansas City Mayor Quinton Lucas attended the protest earlier in the day and advised demonstrators not to tarnish the life of George Floyd and to not take part in "generalized hooliganism."

I know folks are hurting, but please, no matter our pain or anger, let’s make sure we all get home safely. I know we have a lot to fix and work on. Let’s do it together. I’m in. But, let’s not have more hurt tonight.

Gov. Mike Parson activated the Missouri National Guard and the Missouri State Highway Patrol to help control crowds in Kansas City and other locations in the state.

NEW: Missouri Governor declares a state of emergency due to civil unrest as protests in Kansas City are marred Saturday night by destruction, confrontation and tear gas by police. https://t.co/ROKCzPvjyf