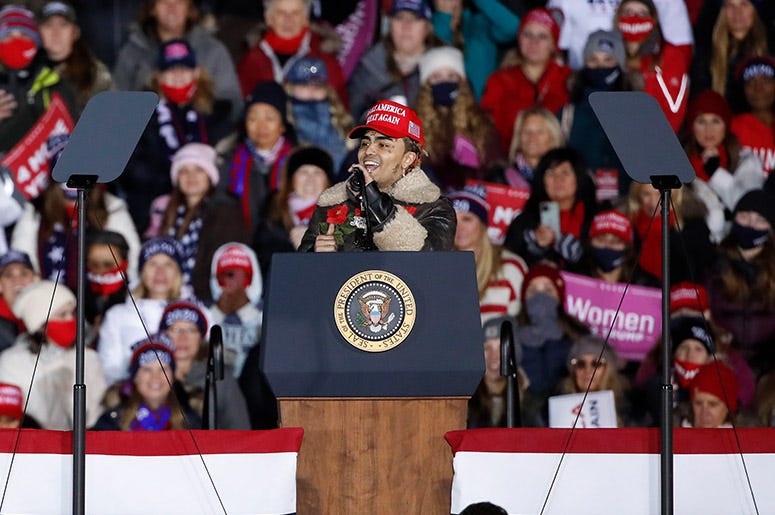 Lil Pump didn’t vote in the November 3 general election. In fact, Gazzy Garcia, Pump’s legal name, failed to even register for a ballot.

It’s only worth mentioning the rapper’s lack of democratic fervor considering his very public endorsement of Republican incumbent Donald Trump. It all started at a late-night rally in Grand Rapids, Michigan, November 2. President Trump thanked “Little Pimp,” as the artist strutted on stage donning a “Make American Great Again” hat. “MAGA 20-20-20! Don’t forget that!” the artist yelled atop the presidential podium. Apparently he ignored his own advice.

According to a report from The Smoking Gun, Pump is not a registered voter on the Florida state voter rolls where he would be registered. He bought a home in Miami Beach, last year. That would be considered his “principal residence” for voter registration.

The irony burns more ardent when you consider the amount of promotion Pump shelled out to Trump weeks before the general election. He posted numerous images that showed general support for the President in odd and exuberant ways.

Pump’s main reason for endorsing Trump was taxes. In a NSFW, profanity-filled Instagram Live video, he told the camera, “Aye, all I gotta say is ‘Trump 2020’ b****!' F***, I look like paying an extra 33 in taxes for Biden,” referring to Joe Biden’s supposed campaign promise to raise some of the tax rates.

Then he called Biden “Sleepy Joe” — a nickname given to the former vice president by Trump himself.

According to numerous media outlets, Joe Biden won the 2020 Presidential Election after securing 306 electoral votes over the weekend.