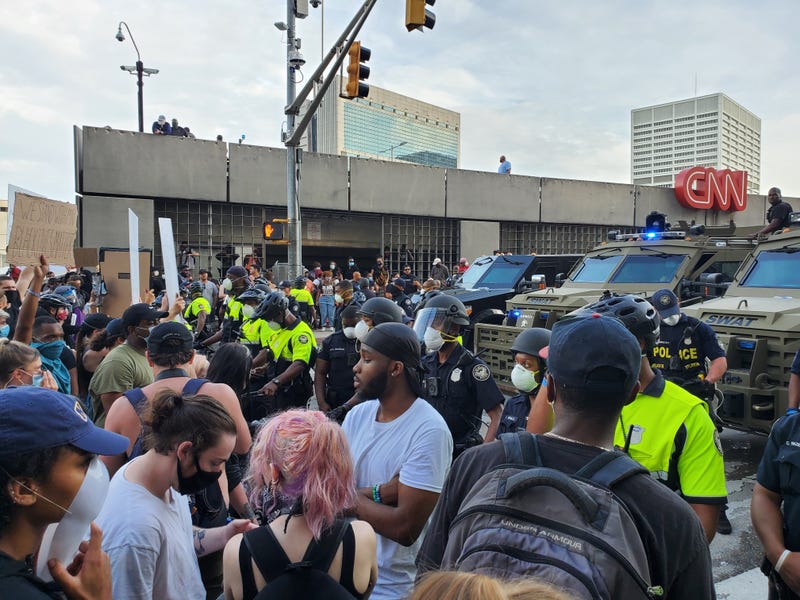 Two men. One Black. One White. They join hands hoisted into the air as a sign of solidarity. They fly a flag too that reads “Black Lives Matter”. But, this was definitely the calm before the storm.

The day started peaceful enough with various marches in the City of Atlanta, including a protest rally at Centennial Olympic park, which organizers say attracted 15 thousand. They rallied against the killings of George Floyd by police in Minneapolis, Ahmaud Arbery by a lawman in Brunswick, Georgia, and the unarmed black men whose lives were taken by police in Atlanta. 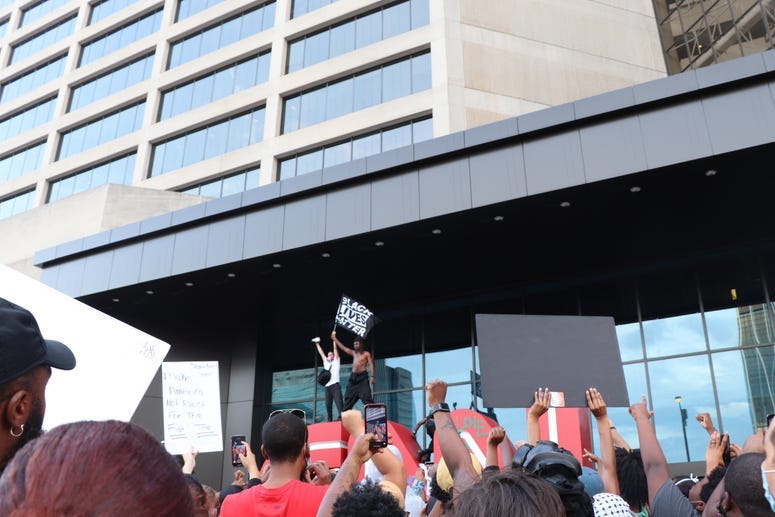 The flag waving men were standing atop the huge red CNN letters that sit outside the news conglomerate building in Atlanta. The letters were sprayed with various graffiti. The windows of the building became targets for bottles and bricks.

The same items were thrown into the air at police as well.

“We were here peacefully protesting”, said one woman. She added, “this has just gotten out of hand.”

Lines of police stood as barricades.

“You have to lock your arms like this”, is what some were heard whispering throughout the massive crowd. It was as if they were planning to mount a challenge.

It was around 8 O’clock pm when protesters started smashing the doors of CNN, and stomping atop police cars. Some of the vehicles would later be set afire. The windows were smashed too.

Around the same time traffic had come to a standstill on Interstate 85 North at 10th and 14th in Atlanta. Protesters had taken to the freeway.

Looting was reported at Lenox Mall in Buckhead. Several stores were hit.

The mayor and Police Chief Erika Shields say they will hold a news conference about the looting and violence Saturday.