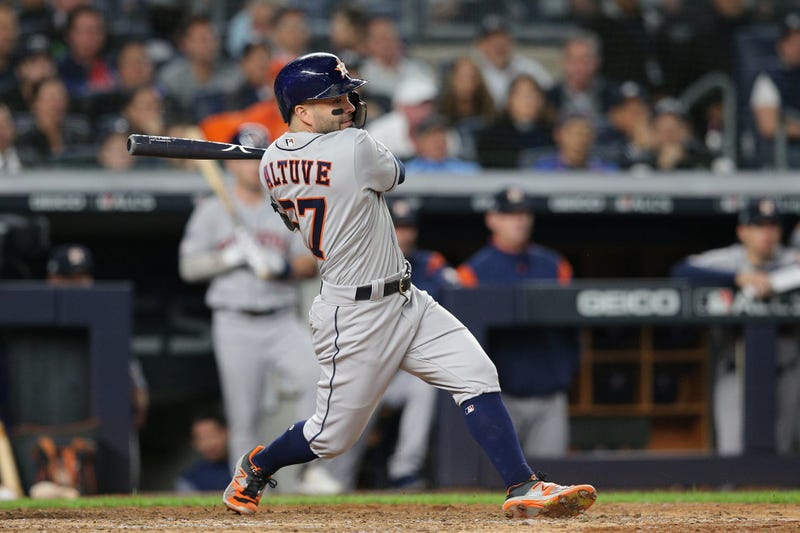 NEW YORK (AP) _ Far from his best, Gerrit Cole was still unbeatable. Heck, he didn't even give up a run.  A gritty Cole held the New York Yankees scoreless without his sharpest stuff, Jose Altuve sparked Houston at the plate and the Astros locked down a 4-1 victory Tuesday to take a 2-1 lead in the AL Championship Series.  Altuve and Josh Reddick homered early off Luis Severino, who labored into the fifth while keeping the Yankees close. But they never broke through against Cole, who grinded through seven innings to win his 19th straight decision despite walking five batters for the second time in his career.      ``Just boiled down to making some good pitches under pressure,'' he said.  Cole pitched out of a bases-loaded jam in the first and stranded nine runners through five, improving to 3-0 with a 0.40 ERA in three outings this postseason. Poised to become a prized free agent this fall who could command more than $200 million, he's putting together a dominant run that's beginning to rival some of baseball's greatest October pitching performances.  The 29-year-old right-hander, unbeaten in 25 starts since his last loss on May 22, allowed four hits and struck out seven. That ended a streak of 11 consecutive games with double-digit strikeouts _ the previous big league record was eight. Cole led the majors with 326 Ks this season.  Game 4 in the best-of-seven playoff is scheduled for Wednesday night _ but that could change. The gloomy weather forecast calls for a substantial storm with steady-to-heavy rain and wind all night in New York, potentially forcing a postponement that would likely alter pitching plans for both teams.  Gleyber Torres homered in the eighth off Houston reliever Joe Smith, one batter after replay umpires reversed a call and ruled Edwin Encarnacion out at first base. That led to a little trash and a ball being thrown onto the field before public address announcer Paul Olden reminded fans not to toss any objects out of the stands.      Roberto Osuna got three quick outs in the ninth for a save.  Cole got away with several pitches in key situations and, other times, flashed the nasty breakings balls and 98-100 mph heat that have made him so unhittable in these playoffs _ and unbeatable since May.  After rolling to a 7-0 victory in the series opener, the Yankees _ the highest-scoring team in the majors this season _ have totaled three runs in the last 20 innings.  ``It's obviously a little frustrating we weren't able to break through with him,'' New York manager Aaron Boone said. ``But I think up and down we gave ourselves a chance. And anytime you're facing a guy like that, you want that kind of traffic. And we had that in several innings. He made big pitches when he had to.''  With two on in the fifth and the Yankees trailing 2-0, Didi Gregorius flied out to Reddick at the right field fence. Cole finally found his rhythm after that, retiring his last seven batters with three strikeouts.      He called his early fastball command ``spotty.''      ``I mean, we just had to work it,'' Cole said.  Houston got a rally going in the seventh against scuffling reliever Adam Ottavino. George Springer walked and went to third when Altuve, who homered on Severino's third pitch, executed a perfect run-and-hit single through the right side.  After some savvy baserunning by Springer to stay in a rundown long enough to get runners to second and third, one run scored on a wild pitch by Zack Britton. Yuli Gurriel then made it 4-0 with a sacrifice fly.      TRAINER'S ROOM  Yankees LF Giancarlo Stanton sat out for the second consecutive game because of a strained right quadriceps. He was replaced in the lineup by CF Aaron Hicks, who batted ninth in his first start since Aug. 3. Brett Gardner shifted from center to left. Hicks fought back from an 0-2 count and drew a 10-pitch walk from Cole his first time up. The switch-hitter, who pinch-hit late in Game 2 and stayed in to play center, had been sidelined by a strained flexor near his right elbow. Stanton, limited by injuries to 18 games during the regular season, was an option to pinch-hit but would probably be on the injured list if this were the regular season, manager Aaron Boone said.      OUT AT HOME  Plate umpire Jeff Nelson exited with a concussion after taking two foul balls off his mask, causing a 16-minute delay before the fifth inning began. Kerwin Danley, who was at second base, went inside and changed into gear to work the plate. Mark Carlson switched from third to second and Marvin Hudson from left field to third. Severino was given additional time to warm up again, and the game proceeded with a five-man crew and no left field ump.      UP NEXT  Both teams were planning bullpen games Wednesday night, but a rainout would allow them to bring back the Game 1 starters on full rest in Game 4 if it gets pushed to Thursday. Yankees right-hander Masahiro Tanaka beat Zack Greinke 7-0 in the series opener last Saturday at Houston, improving to 5-2 with a 1.32 ERA in seven career postseason outings. Tanaka has permitted only one run and four hits over 11 innings in winning both his playoff games this year, while Greinke is 0-2 with an 8.38 ERA in two starts.