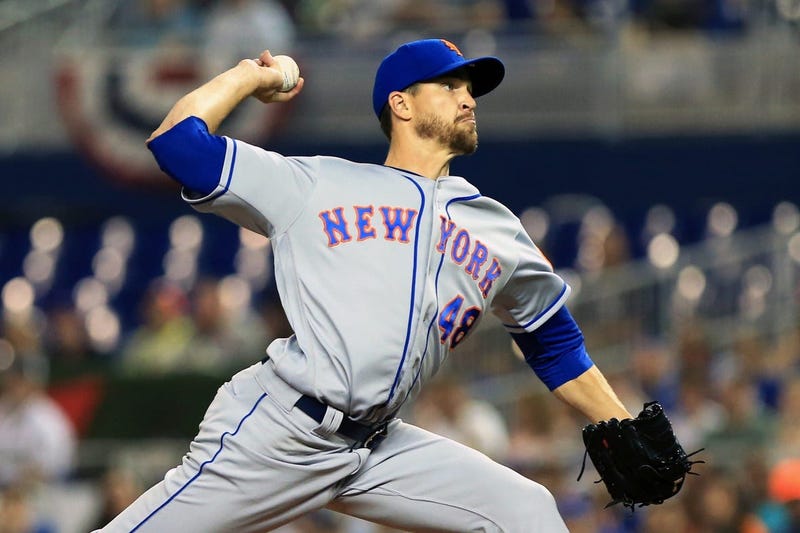 MIAMI (AP) _ Jacob deGrom struck out a career-high 14 in seven shutout innings, hit a home run and ended his streak of five consecutive losses to the Miami Marlins, beating them 6-4 Wednesday night to help the New York Mets complete a three-game sweep.  DeGrom (2-0) allowed three hits and walked one. Only one Miami runner reached second base against the reigning NL Cy Young Award winner.  New York took a 6-0 lead into the ninth, but the Marlins eventually brought the tying run to the plate. The Mets held on, and headed back for their home opener at Citi Field on Thursday against Washington with a 5-1 record.  DeGrom extended the NL's longest active scoreless streak to 26 innings and allowed less than four runs for the 31st consecutive start, extending his big league record. Lowly Miami was the last team to score more than three against him _ last April 10.  DeGrom had made eight starts versus the Marlins since his most recent win over them on July 6, 2016. He's 5-6 against Miami, which has beaten him more than any other team.  An infielder at Stetson University before he was converted into a pitcher, deGrom pulled the first pitch from Trevor Richards in the third inning into the Mets' bullpen. DeGrom hiked his career average to .188 with his second career home run, and he's tied for the team lead in homers.  DeGrom is the first Mets pitcher to start a season with consecutive double-digit strikeout games. He departed after throwing 114 pitches, a total he topped just twice last year.  Two Mets relievers allowed four runs in the ninth before Edwin Diaz came on to get Curtis Granderson to fly out with a runner on for his third save.  Amed Rosario tripled home the Mets' first run in the second. Rookie Pete Alonso doubled home a run in the third, and he scored on Robinson Cano's double in the seventh.  New York rested catcher Wilson Ramos, but he delivered a pinch-hit RBI single in the eighth to hike his average to .474 and make the score 6-0.      Richards (0-1) allowed three runs and struck out seven in six innings.      NO SHOWS  DeGrom's start failed to stir South Florida from its apathy toward baseball. Attendance was 7,486.      REPEAT  For the second year in a row, the Mets are off to a 5-1 start and the Marlins have started 2-5.      TRAINER'S ROOM  Mets: LF Brandon Nimmo was back in the lineup after getting hit on the left hand by a pitch Tuesday.      UP NEXT  Mets: RHP Noah Syndergaard (0-0, 6.00) is scheduled to start their home opener Thursday when he pitches for the second time in a row against the Nationals and RHP Stephen Strasburg (0-0, 6.00). Syndergaard has won his past seven home decisions.  Marlins: Following a day off, the Marlins begin their first trip Friday when RHP Pablo Lopez (1-0, 5.06) starts at Atlanta.