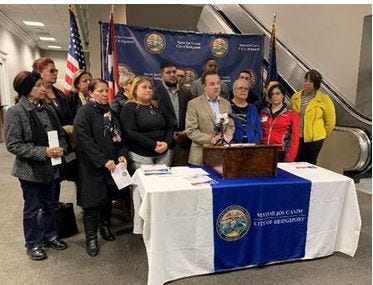 On Monday, city leaders along with state and local officials, announced the formation of "Greater Bridgeport United for Puerto Rico 2020".

Those behind the effort are collecting monetary donations they say will be earmarked for supplies including tents, cots, mosquito nets, portable bathrooms, batteries, and cash for purchasing materials to rebuild.

This Saturday, individuals will be on hand to collect cash donations at the Bridgeport East Side Senior Center from 10:00 a.m. until 4:00 p.m.  They will also set up at the city's Emergency Operations Center to run a collection drive there during the same time period.

Puerto Rico has been hit by a series of earthquakes since last month, causing widespread damage to homes and the island's already tenuous infrastructure.