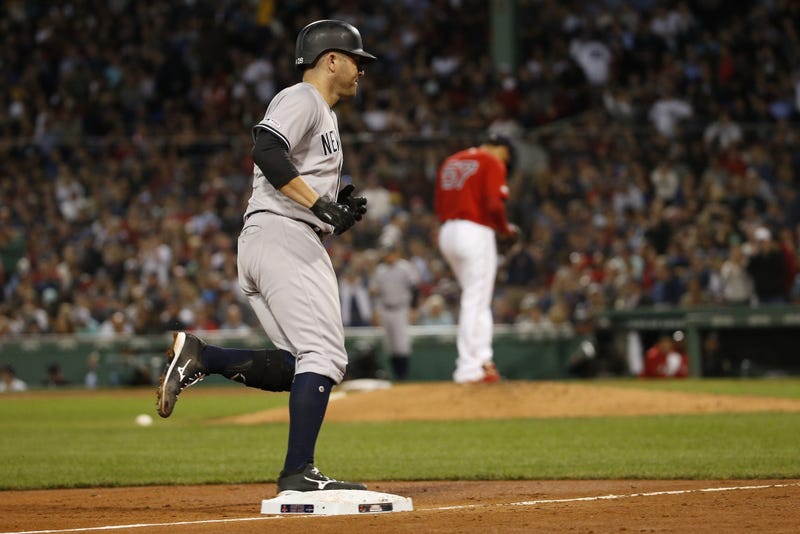 BOSTON (AP) _ The New York Yankees officially ended Boston's three-year reign as AL East champs, blanking the Red Sox 5-0 Monday night behind another big effort by James Paxton.  Hours after the Red Sox parted ways with team president Dave Dombrowski, and right after former star David Ortiz returned to Fenway Park three months after being shot, they were shut out at home for the first time this season. Boston dropped 18 1/2 games behind the division-leading Yankees with 18 games left.  The defending World Series champion Red Sox are still in playoff contention, but barely. They began the day eight games out of the second AL wild-card spot.  Paxton (13-6) won his eighth straight start, allowing four hits in 6 2/3 innings, as the Yankees increased their lead to nine games over second-place Tampa Bay. New York entered the day tied for the majors' best record and improved to a season-high 45 games over .500.  Austin Romine and Gio Urshela each hit solo homers for the Yankees, who took the final three of a four-game series and finished the season 14-5 against their longtime rivals. New York increased its club record to 270 homers, a night after setting the mark.  Paxton struck out seven and walked three in setting a career best in victories.  Eduardo Rodriguez (17-6) gave up one run in six innings, striking out nine with five hits and a walk while throwing a season-high 117 pitches. He was 4-0 with a 1.03 ERA in his last four starts, and the Red Sox lost for just the second time (12-2) when he started at Fenway Park.  Romine sliced his homer down the right-field line past the Pesky Pole, making it 1-0 in the fifth.  New York broke it open by getting three runs off Darwinzon Hernandez in the seventh. Urshela led off with his homer into the Green Monster seats. DJ LeMahieu had an RBI double and scored on Gleyber Torres' sacrifice fly.      Jackie Bradley Jr. had three hits for Boston.      CENTER OF ATTENTION  Ortiz threw out the first pitch, thanking the fans for their support after he was shot in the back in his native Dominican Republic.  In his first public appearance since June 9, when he was shot and seriously injured in a Santo Domingo nightclub, Ortiz walked out steady and strong to a cheering crowd before he threw the pitch to former teammate and catcher Jason Varitek.      CENTER PLAY  Yankees CF Brett Gardner made a diving grab of Xander Bogaerts' sixth-inning liner and CF Bradley had a leaping catch at the wall on Edwin Encarnacion's fly to end the seventh. Bradley also made a jumping snag of Luke Voit's drive on the track, opening the eighth.      TRAINER'S ROOM  Yankees: Placed OF Mike Tauchman on the injured list (Grade 2 left calf strain; out 6-8 weeks). ``Right now, I'm bummed out for him, but we've got to keep moving,'' manager Aaron Boone said. . Boone doesn't expect OF Giancarlo Stanton (right knee sprain) to play for Double-A Trenton before re-joining the Yankees. ``Being down in Tampa, he's able to face pitchers and able to rack up a lot of at-bats while he's getting all the way back to physically being able to play games,'' the manager said.  Red Sox: Manager Alex Cora said they are not planning yet to shut LHP David Price (cyst left wrist) down for the season. He hasn't pitched since Sept. 1.      UP NEXT  Yankees: Haven't announced a starter yet for their series opener at Detroit Tuesday. RHP Edwin Jackson (3-9, 9.16 ERA) is slated to go for the Tigers.  Red Sox: RHP Nathan Eovaldi (1-0, 5.77) is scheduled to start Tuesday when they open a three-game series Tuesday in Toronto. RHP T.J. Zeuch (0-0, 4.50) is in line to go for the Blue Jays.