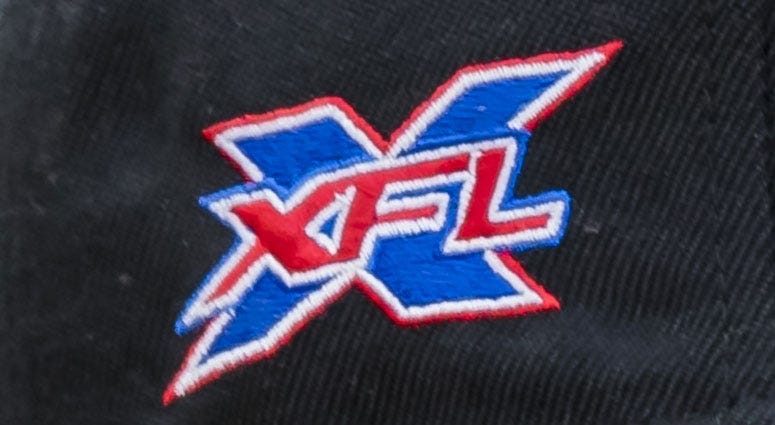 If you need a football fix with the NFL offseason officially here, the XFL has you covered. The reboot of the once-failed league looks nothing like the one that first came about in 2001. There are no nicknames on the back of jerseys, no scantily clad cheerleaders or wrestling themes that, perceived or not, brought an air of illegitimacy to the league.

The goal this time around is to be a true football league, with some radical rule changes, but to one-day perhaps work with the NFL. Of course, for the players it’s a chance to show the NFL what they’ve got. And there are plenty of recognizable names on each team, whether as former college stars or NFL talent: 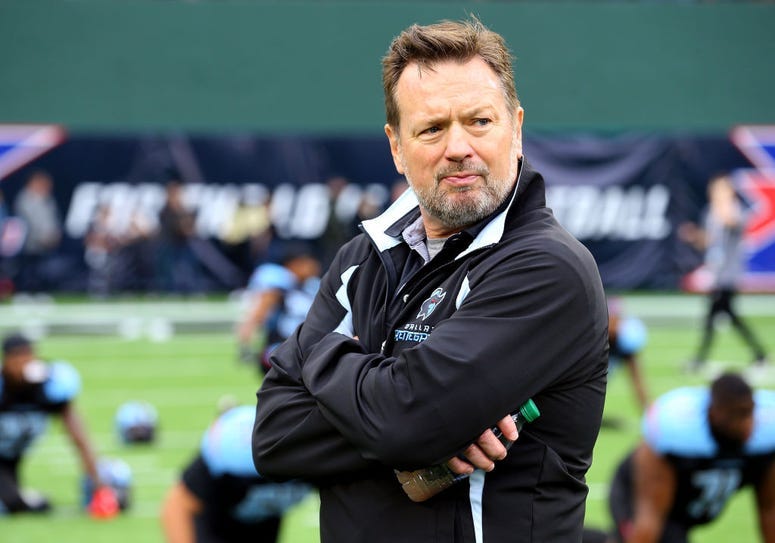 The Renegades are led by a coaching legend. Bob Stoops won 10 conference titles and the 2000 national title with Oklahoma before his abrupt retirement in 2017. On the field he has longtime Steelers’ backup Landry Jones and Syracuse standout Eric Dungey at quarterback, but went with Philip Nelson (East Carolina) in the opener, a 15-9 loss to St. Louis.

In the backfield, Lance Dunbar is the leading rusher, after he spent five years with Dallas and, most recently, 2017 with the Rams. 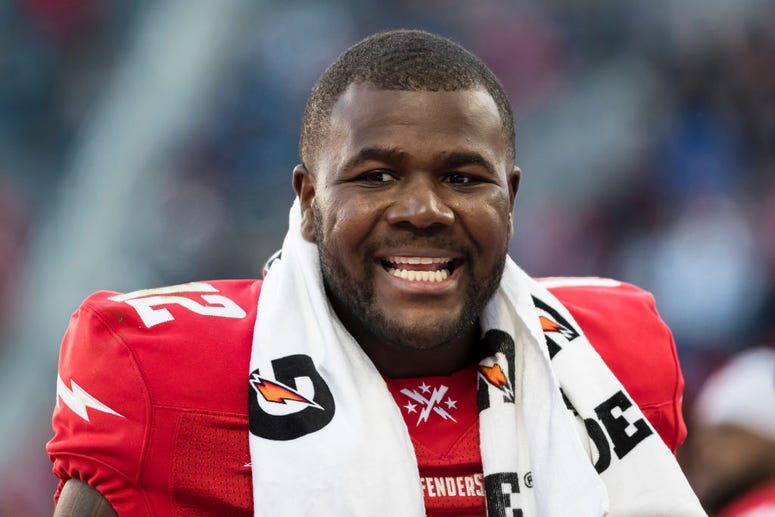 Running the offense in DC is former Ohio State star Cardale Jones, who completed 16-of-26 passes with a pair of touchdowns in the season-opening win over Seattle. He, of course, came off the bench late in the season to lead the Buckeyes to a national title in 2014. His leading receiver in Week 1 was Eli Rogers, who spent three years with the Steelers. And the NCAA’s all-time rushing leader is one of the running backs, as Donnel Pumphrey (6,405 rushing yards at San Diego State) carried the ball four times in the opener.

Former Temple Owl PJ Walker is the quarterback, and he had a day in Week 1, throwing for 272 yards, four touchdowns and a lone pick in a win over Los Angeles. His main target was former All-ACC wideout Cam Phillips (Virginia Tech). And second on the depth chart as a running back is former Boston College star Andre Williams, who spent two years with the Giants. Defensively, former NFL player and Missouri standout Kony Ealy leads the charge.

And perhaps the most famous name on the team is backup quarterback Connor Cook, who won a Rose Bowl with Michigan State, where he was the game’s MVP.

It’s been a long, winding road for Josh Johnson. The former Buccaneer made five starts in Tampa between 2009-11, then he’s bounced around rapidly. Between 2012-19 he was at one point rostered by: the 49ers, Browns, Bengals, Jets, Colts, Bills, Ravens, Giants, Texans, Raiders, Redskins and Lions. And that doesn’t include a stint in the UFL (2012). Now he’s in LA, but didn’t play in Week 1.

There are a smattering of other former college names, but the only one that stands out is on the coaching staff. Norm Chow, the former head coach at Hawaii and offensive coordinator in the Leinart-Bush USC days, is the OC. 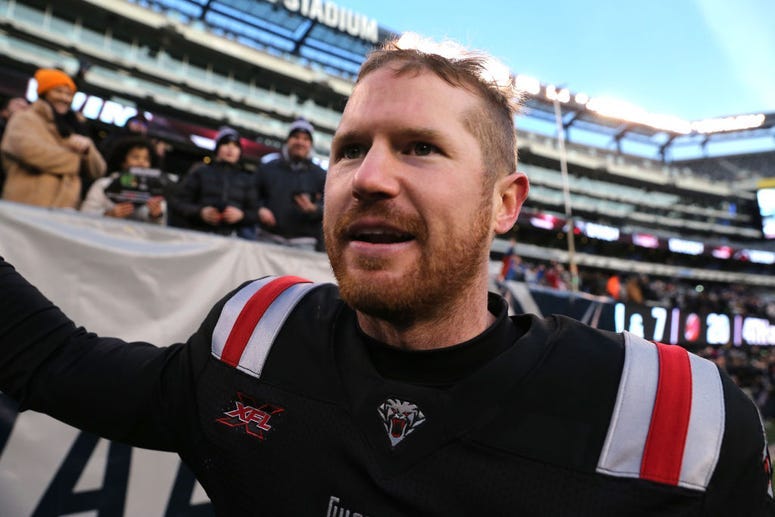 New York is quarterbacked by Penn State notable Matt McGloin, who took every snap under center in the season-opening win over Tampa Bay.

The Guardians also feature the only former UConn Husky in the XFL: former first-team All-AAC cornerback Jamar Summers. While on the sidelines, former Southern Connecticut State player and coach (okay, he did other things, too) Kevin Gilbride is the coach. Formerly he led the Chargers in 1997-98 and was the longtime OC with the Giants. 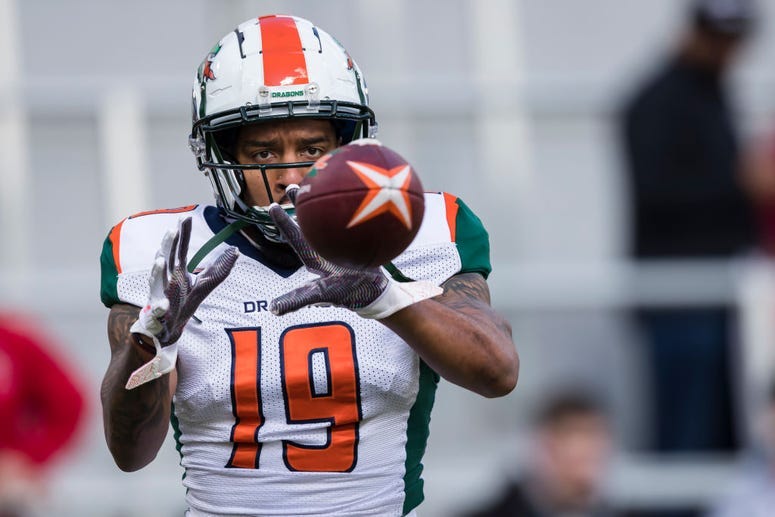 The most notable name on the Dragons is Keenan Reynolds, the NCAA’s all-time leader in rushing touchdowns while at Navy. Now a wide receiver, Reynolds caught up two passes for five yards in the season-opening loss to DC. Fans might also recognize backup quarterback BJ Daniels, who finished his career at USF second on the Big East’s all-time yardage list. 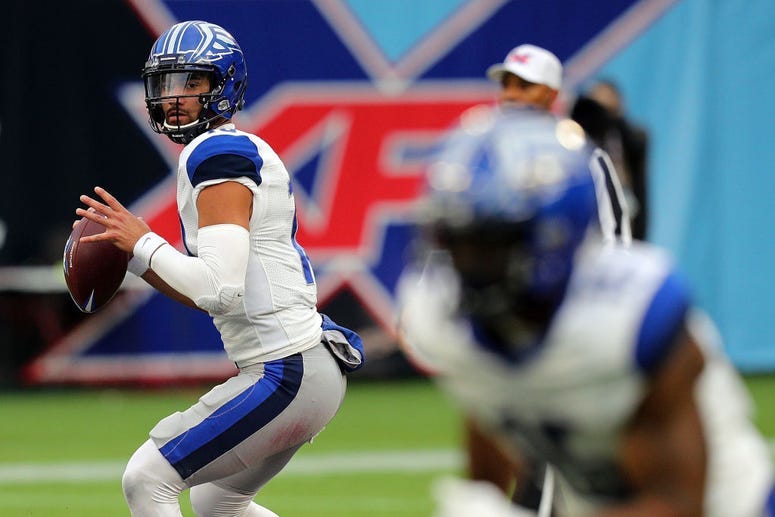 Two of the quarterbacks duked it out in the Egg Bowl, with Jordan Ta’amu (Ole Miss) the starter ahead of Nick Fitzgerald (Mississippi State). But the most popular player on the BattleHawks is on special teams. Punter Marquette King was a second-team All-Pro with the Raiders in 2016, but you probably most remember his on-field dances that came after his punts.

After signing a long-term deal in 2016 with Oakland, he was cut in March 2018, went to Denver and was released that October after going on injured reserve. 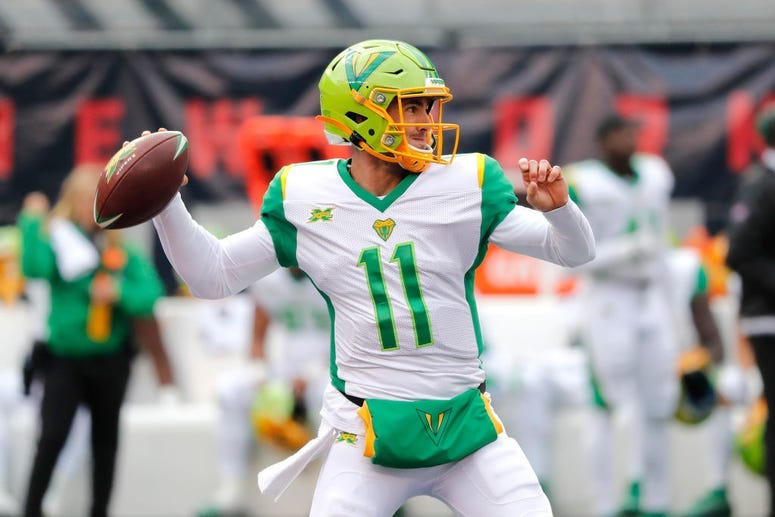 There are four quarterbacks on the Vipers’ roster, and all were decent college names. Former Georgia Bulldog Aaron Murray started, while USF standout BJ Daniels was used as both a passer and a rusher. Former Oklahoma State Cowboy Taylor Cornelius is on the roster, along with Chase Litton, a three-year starter at Marshall.