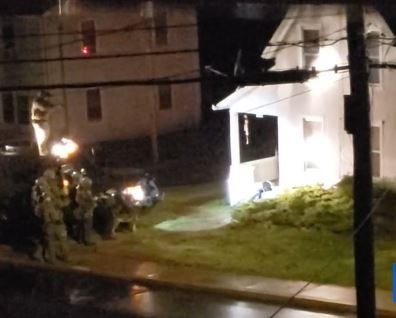 TOLLAND, Conn. (AP) Officers who shot an unarmed Hispanic man to death outside his mother's Manchester home in April were justified because they believed he had weapon, a prosecutor's report released Friday said.

Tolland State's Attorney Matthew Gedansky's finding comes more than six months after the April 2 standoff and confrontation that began when two parole officers went looking for 27-year-old Jose ``Jay'' Soto, who had disappeared from a halfway house in October 2019.

The Capitol Region Emergency Services Team was called when Soto did not come out and made threats, police said.

During an hours-long standoff Soto acted erratically and had threatened to get into a shootout with police, authorities said.

He was shot by four officers from the CREST team when he exited the home. Police said he burst through the door pointing his hands at police in a ``firing position'' with what they believed was a gun.

It turned out to be a cellphone.

``The officers' beliefs were objectively reasonable because Mr. Soto's actions by aggressively exiting the house while holding an object in a shooting stance, indicated that he possessed a firearm ready to fire,'' Gedansky wrote in his report. ``Mr. Soto made statements to law enforcement personnel that he had a firearm, and was going to `start shooting.' Mr. Soto made statements that he `was going to shoot it out' with the police. One of these statements was recorded in a voicemail.''

The shooting was highlighted at local marches following the May police killing of George Floyd in Minneapolis. Activists held signs reading ``Justice for Jay'' and called for more attention to Soto's case and accountability for the officers involved.

``We tried telling the police that Jose did not have a gun, there's no guns in the house, even if he said he had a gun he doesn't have a gun we told them,'' Anthony Vazquez, the boyfriend of Soto's mother told investigators in a statement. ``Jose had PTSD, he's diagnosed with it, all the trauma he's been through, throughout his life. I know he was medicated in prison, so it's been a while for the diagnosis.''