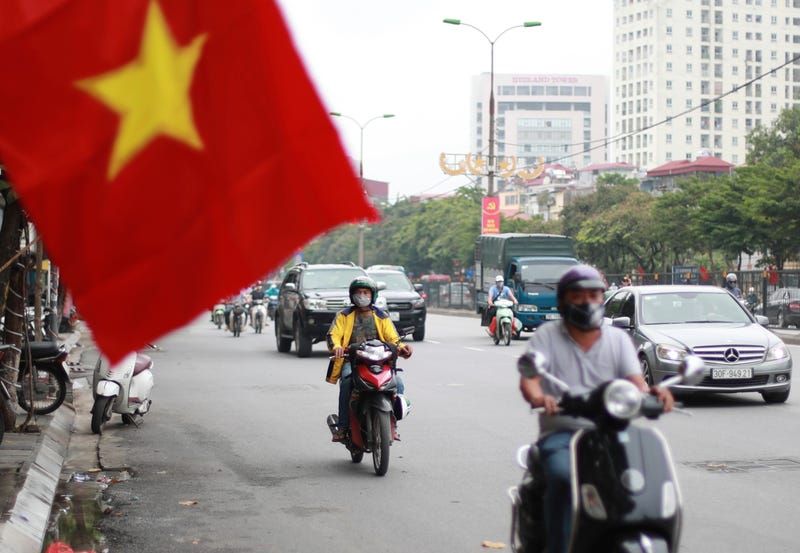 Health authorities ordered 137 people who had been in close contact with the man to stay in a central quarantine facility and shut down an English center where the man works as a teacher, the newspaper said.

Vietnam’s borders remain closed in an attempt to keep out the virus. Only limited international flights are operating to repatriate Vietnamese nationals and transport foreign diplomats and experts.

The country has reported 1,347 coronavirus cases, including 35 deaths. Nearly half of the confirmed cases were imported, according to the Health Ministry.

— Moderna asking US, European regulators to OK its virus shots

— Fauci: US may see ‘surge upon surge’ of virus in coming weeks after Thanksgiving travel

— U.K. stocks up on vaccines, hopes to start virus shots within days

President Rodrigo Duterte said in televised remarks late Monday that aside from Metropolitan Manila, the bustling capital region of more than 12 million, the “general community quarantine” would be imposed in seven other cities and provinces in December.

The restrictions ban large public gatherings, actual school classes and entertainment businesses but allow shopping malls, restaurants and essential shops, including barber shops, to operate with required safeguards, including the wearing of face masks and shields and social distancing.

Duterte lamented that many still defy quarantine restrictions like the wearing of face masks and warned of a possible resurgence of infections like in some Western countries.

The Philippines has reported more than 431,600 confirmed coronavirus infections, the second-highest in Southeast Asia, with at least 8,392 deaths.

SANTA FE, N.M. -- New Mexico is moving to a county-by-county system for responding to COVID-19 that allows local communities to shed some restrictions on mass gatherings, restaurant dining, attendance at religious services and some nonessential businesses — if the virus retreats.

At this point, only one of New Mexico’s 33 counties — Los Alamos County — would be eligible to ease tight restrictions on gatherings and resume indoor dining at restaurants.

The new system will take effect Wednesday. Over the past week, one person in every 155 people in the state was diagnosed with COVID-19. The state Republican Party said the governor was stoking false hope that restrictions may be lifted.

UNITED NATIONS -- The head of the world’s largest humanitarian network is urging governments and institutions to combat “fake news” about COVID-19 vaccines which has become “a second pandemic” and start building trust in communities around the world about the critical importance of vaccinating people.

Francesco Rocca, president of the International Federation of Red Cross and Red Crescent Societies, said in a virtual briefing to the U.N. Correspondents Association on Monday that “to beat this pandemic, we also have to defeat the parallel pandemic of distrust.”

He said there is “a growing hesitancy about vaccines in general, and about a COVID vaccine in particular” around the world, pointing to a recent Johns Hopkins University study in 67 countries that found vaccine acceptance declined significantly in most countries from July to October this year.

He stressed that the lack of trust “is by no means a Western phenomenon,” citing the federation’s research in recent months in eight African countries -- Congo, Cameroon, Gabon, Zimbabwe, Sierra Leone, Rwanda, Lesotho and Kenya -- which showed a steady decline in the perceptions of the risk of COVID-19 infection.

A growing number of people indicated the virus doesn’t affect young people or Africans, that the disease doesn’t exist now but did exist and the pandemic has ended, he said. “In several African countries, we have seen a common skepticism towards vaccines in general, with a common belief being that foreigners use Africa as a medical ‘testing ground.’”

MIAMI — The new mayor of Florida’s most populous county tested positive for the coronavirus on Monday, officials said.

Miami-Dade Mayor Daniella Levine Cava announced the test result on Twitter. She said her husband, Dr. Robert Cava, was exposed to COVID-19 by a patient last Wednesday. He has also tested positive.

“Rob and I are quarantining at home,” Levine Cava wrote. “We both remain in good spirits and have only mild symptoms.”

Spokeswoman Rachel Johnson told the Miami Herald that Levine Cava has not been in contact with county employees since Wednesday and plans to participate in Tuesday’s county commission meeting by phone.

Levine Cava, 65, assumed office Nov. 17 after being elected earlier in the month. The Democrat had previously served as a county commissioner since 2014.

SACRAMENTO, Calif. — California could see a tripling of hospitalizations by Christmas and is considering stay-home orders for areas with the highest case rates as it tries to head off concerns that severe coronavirus cases could overwhelm intensive care beds, officials said Monday.

“The red flags are flying in terms of the trajectory in our projections of growth,” said Gov. Gavin Newsom. “If these trends continue, we’re going to have to take much more dramatic, arguably drastic, action.”

Hospitalizations have increased 89% over the past 14 days and nearly 7,800 coronavirus patients were hospitalized as of Monday. About 12% of Californians testing positive are likely to need hospital care within the next two to three weeks.

The biggest concern is intensive care cases, which have increased 67% in the past two weeks. If that continues, it would push ICU beds to 112% of capacity by mid-December.

That statistic is likely to drive state-mandated stay-at-home orders in 51 of California’s 58 counties that already are seeing the most restrictions on business activities, said Dr. Mark Ghaly, the state’s secretary of health and human services.

ATLANTA — U.S. Rep. Austin Scott of Georgia has tested positive for COVID-19. That makes him the third Georgia congressman to contract the virus.

Scott represents Georgia’s 8th District, which stretches through the interior of south Georgia. The chief of staff’s statement did not say if Scott was experiencing any symptoms but added he was heeding his doctor’s advice.

MINNEAPOLIS — Gov. Tim Walz said Monday that his administration plans to release details next week on when Minnesota will start getting its first doses of coronavirus vaccines and who will be the first to get them.

Walz made the comments in a briefing for reporters following a conference call with several other governors, Vice President Mike Pence; Dr. Anthony Fauci, the federal government’s top infectious-diseases expert; and Health and Human Services Secretary Alex Azar on the status of the country’s plans for distributing the vaccines.

The Democratic governor said he expects to hold “a very extensive briefing” for reporters and the public, possibly next Monday or Tuesday, on where Minnesota stands in the process. Details are still being worked out on the federal level about who gets priority — such as senior citizens and health care workers — and what the distribution plan will look like, he said.

The governor has been critical of the Trump administration for its lack of coordinated federal plans for fighting the pandemic, which has put much of the onus on the states. But he had praise for the federal vaccine drive.

“I believe the work around the vaccine and the plans around distribution have been incredibly well done,” Walz said.

The discussion with the governors involved distributing the first doses coming from Pfizer and later Moderna.

SPRINGFIELD, Ill. — New cases of coronavirus illness in Illinois dropped Monday for the third day in a row, but officials fear the fallout from Thanksgiving travel and family gatherings will push the numbers back up.

Gov. J.B. Pritzker, a Democrat, said there will be no change in current restrictions on social interaction for several weeks. They ban indoor food service, limit retail-store capacity and cap gatherings at 10 or fewer.

“We are still very much in a precarious place ...,” Pritzker said. “I say this as we come off of a Thanksgiving holiday when many people may have dropped their guard and gathered with people from outside of their own households. The hope now is that we can fend off the surge in the next few weeks to get to a healthier holiday time in the latter half of December.”

HARRISBURG, Pa. — Pennsylvania’s two-month-old coronavirus exposure notification app can now be used by mobile phone users as young as 13 as health officials work to stop the virus’ spread in schools around the state, officials said Monday.

The app, named COVID AlertPa, had previously been limited to people 18 and over.

“By expanding the age range, middle- and high-school students will be able to add their phones to the fight and help in contact tracing that occurs in their schools if a positive case is identified,” state Health Secretary Dr. Rachel Levine said at a virtual news conference.

A parent or legal guardian must approve the minor’s use of the app, she said. So far, more than 627,000 mobile phone users have downloaded it, according to the state.

Some school districts continue to conduct in-person instruction, even though each of Pennsylvania’s 67 counties — except for northwestern Pennsylvania’s rural Cameron County, with fewer than 5,000 residents — has passed the threshold of new cases where the state Department of Education recommended fully remote instruction.

Deputy Prime Minister and Finance Minister Chrystia Freeland says the country is facing its most severe challenge since the second World War, the worst economic shock since the Great Depression and the worse health crisis since the Spanish flu over a century ago.

The cost to date has the federal deficit reaching a record $381.6 billion Canadian (US$294 billion) this year, but the government says it could close in on $400 billion Canadian (US$308 billion) if widespread lockdowns return in the coming weeks. Toronto, Canada’s largest city, is on lockdown.

The government’s fall economic update proposes to send extra child-benefit payments to families next year. The government is proposing $25 billion Canadian (US$19 billion) in new spending.

JACKSON, Miss. — Mississippi is reporting a record number of coronavirus hospitalizations for a single day.

State Health Officer Dr. Thomas Dobbs said Monday on Twitter that the record comes ahead of an “anticipated Thanksgiving acceleration” in coronavirus cases.

“This is truly serious,” he wrote. “Protect yourselves and your family now. We all know how.”

The state Health Department said Monday that Mississippi, with a population of about 3 million, has reported more than 153,250 confirmed coronavirus cases and at least 3,807 deaths from COVID-19 as of Sunday evening. That’s an increase of 1,485 cases and one death from the day before. The death occurred Saturday and was identified through a death certificate.

KANSAS CITY, Kan. — Hospital and nursing officials fear that if COVID-19 cases continue unchecked there won’t be enough nurses to staff new hospital beds in the near future in the Kansas City metro area.

Kansas health officials on Monday added 4,425 cases to the state’s pandemic tally since Friday, bringing the total to 157,446. Data showed that Kansas averaged 2,198 new confirmed and probable coronavirus a day for the seven days ending Monday. That is below the record average of 2,766 cases.

It is too soon to see how Thanksgiving gatherings have impacted coronavirus numbers, but medical providers expect to see another rise in hospitalizations in 10 to 14 days once people begin showing symptoms.

The Kansas Department of Health and Environment reported on Monday 87 new hospitalizations, bringing the total of hospitalizations to 5,105 since the start of the pandemic. The state’s COVID-19 dashboard showed 227 coronavirus patients were in ICU units, with 39% of ICU capacity remaining in Kansas.

MIAMI — Florida’s Gov. Ron DeSantis said on Monday that schools will be required to remain open despite the rise in confirmed COVID-19 cases and hospitalizations, arguing lockdowns and closures have not worked.

Dr. Anthony Fauci, director of the National Institute of Allergy and Infectious Diseases, also told ABC’s “This Week” on Sunday that the spread of the virus among children “is not really very big at all” and is now advising to get children back in the classrooms.

The Republican governor said schools will continue to offer online classes for families who have chosen not to physically return, but school districts will require students who have fallen behind online to return to in-person instruction.

Florida has seen cases rise again, now totaling more than 990,000 confirmed cases since the pandemic began earlier this year. More than 18,700 people have died with COVID-19 since March.