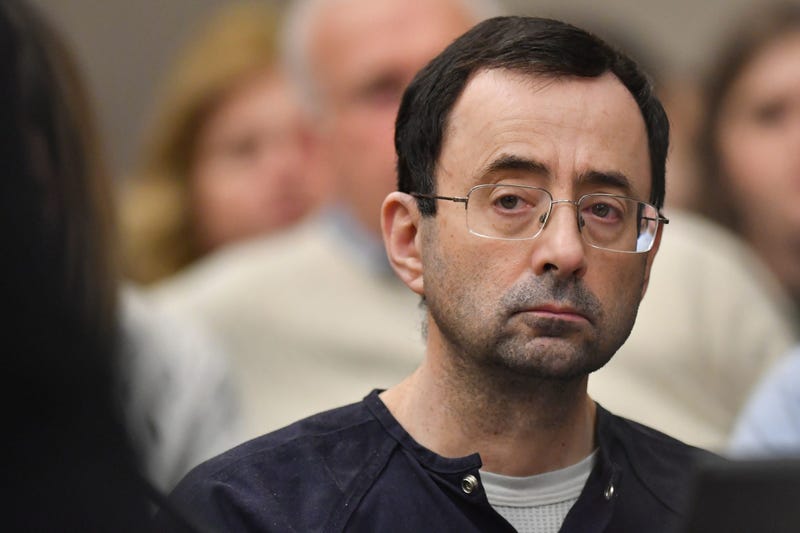 (WWJ/AP) - Fifty-one women are suing the U.S. Olympic Committee, its board members and a number of former high-ranking officials for failing to prevent their abuse at the hands of imprisoned sports doctor Larry Nassar.

The lawsuit, filed Tuesday in federal court in Denver, details abuse dating to the late 1990s. One of the victims was 8-years-old.

Most contend that because they were young and sexually inexperienced, they were not aware they were being abused at the time. Some became aware when other victims began telling their stories at Nassar's 2018 sentencing hearing for child pornography and sex abuse. Others acted after the release of a report in December that detailed the USOC's slow response to sex-abuse cases.

The lawsuit alleges the USOC violated Title IX and the constitution by not acting promptly and more forcefully.

The USOC said the federation would have no comment on pending litigation. The governing body has tried to remove itself as a defendant in a number of other similar lawsuits, contending it should not be held legally responsible for Nassar's crimes. Those lawsuits include USA Gymnastics as defendants, but this one singles out the USOC, which is based in Colorado Springs.

The lawsuit outlines abuse by six other coaches, and the USOC's slow response to it, though most plaintiffs say they were abused by Nassar.

Many of the plaintiffs' claims in this lawsuit are similar to those of other victims: Often their parents were present during the examinations but Nassar positioned himself in a way that they could not see what was happening.

One plaintiff described gasping and looking over at her mother when Nassar touched her inappropriately, and Nassar responded by saying "Sorry, cold hands."

In addition to compensation, the plaintiffs are asking for institutional reform at the USOC. Virtually all the top executives — including the chairman, CEO and sports performance director — have left voluntarily or been fired since Nassar's sentencing in January 2018.

Nassar is currently serving life in prison for sexually abusing hundreds of athletes over the years. The 54-year-old pleaded guilty to assaulting victims with his hands under the guise of treatment. He treated campus athletes and scores of young gymnasts at his Michigan State office. He also had an international reputation while working at the same time for USA Gymnastics, which trains Olympians. Gold medalists Jordyn Wieber, Aly Raisman, Gabby Douglas and McKayla Maroney, to name a few, are among the survivors.

More than 250 women and girls gave statements in court when Nassar was sentenced. During the sentencing hearings, many accusers described an ultra-competitive gymnastics culture in which authority figures could not be questioned and Nassar was free to abuse young patients year after year. They said they had little choice to see doctors other than Nassar, who was renowned throughout the sport.

During victim impact statements, one woman said when she reported Nassar’s disturbing “treatments” to training staff, she was allegedly told that Nassar was a world-renowned doctor and that his “inter‐vaginal adjustments” were legitimate medical treatments.

USA Gymnastics filed for Chapter 11 bankruptcy protection in December in an effort to reach settlements in the dozens of sex-abuse lawsuits it faces in courts across the country from athletes who blame the group for failing to supervise Nassar.