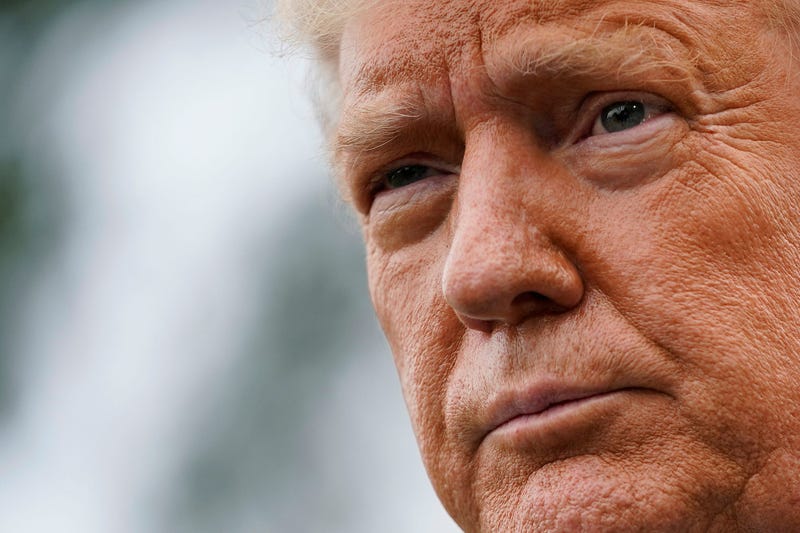 Photo credit President Donald Trump listens to a reporter's question as he speaks to members of the press on the South Lawn of the White House in Washington, Thursday, Sept. 24, 2020, before boarding Marine One for a short trip to Andrews Air Force Base, Md. Trump is traveling to North Carolina and Florida. (AP Photo/Patrick Semansky)
By The Associated Press

NEW YORK (AP) — A federal appeals court didn't immediately rule Friday after hearing arguments in President Donald Trump’s long-running fight to prevent a top New York prosecutor from getting his tax returns. Whatever the three-judge panel decides, the closely watched case is almost certain to find its way back to the Supreme Court and likely won't be resolved before the November election.

Trump’s lawyers maintain that the subpoena seeking eight years of the president’s corporate and personal tax returns was issued in bad faith and is overly broad. They argued that aside from acknowledging an inquiry into money paid to two women who alleged affairs with Trump, Vance’s office hasn’t specified why it needs such a vast collection of his financial records.

“If you were to look up the definition of a fishing expedition, this is it,” Trump lawyer William Consovoy argued, echoing what his famous client has said about the investigation.

Carey Dunne, of the district attorney’s office, said Trump and his lawyers have been on notice throughout the subpoena fight that the investigation involves more than just payments related to alleged affairs — but because of grand jury secrecy rules, they can't be told specifically what the office is after.

“The recipient of a subpoena just doesn’t have a right to go to court and demand to be told what an investigation is all about,” Dunne said.

A temporary restraining order remains in effect, preventing any tax records from being turned over at least until the latest appeal is decided. Trump has said he expects the case to return to the Supreme Court, making it unlikely the dispute will be resolved before the Nov. 3 election pitting the incumbent president and Democratic rival Joe Biden.

The Supreme Court in July ruled that the presidency in and of itself doesn’t shield Trump from the investigation, prompting Trump’s lawyers to raise new objections and start the appellate process over again.

With its decision, the Supreme Court returned the case to U.S. District Judge Victor Marrero in Manhattan so Trump’s lawyers could seek to block the subpoena on other grounds.

Trump's lawyers contend the subpoena was issued in bad faith, overly broad, might have been politically motivated and amounted to harassment. Marrero rejected those claims, leading to the appeal being heard Friday.

Trump, like his lawyer, has called Vance’s investigation “a fishing expedition” and said it's “a continuation of the witch hunt — the greatest witch hunt in history.”

Vance, a Democrat, began seeking the Republican president’s tax returns from his longtime accounting firm over a year ago, after Trump’s former personal lawyer Michael Cohen told Congress that the president had misled tax officials, insurers and business associates about the value of his assets.

Vance's office argued in court papers this week that there's “a mountainous record” of public allegations of misconduct to support its efforts to obtain Trump’s tax returns, such as news reports alleging Trump or his companies inflated or minimized the value of assets for business and tax purposes.

Even if Vance does get Trump’s tax records, those would be part of a confidential grand jury investigation and not automatically be made public.