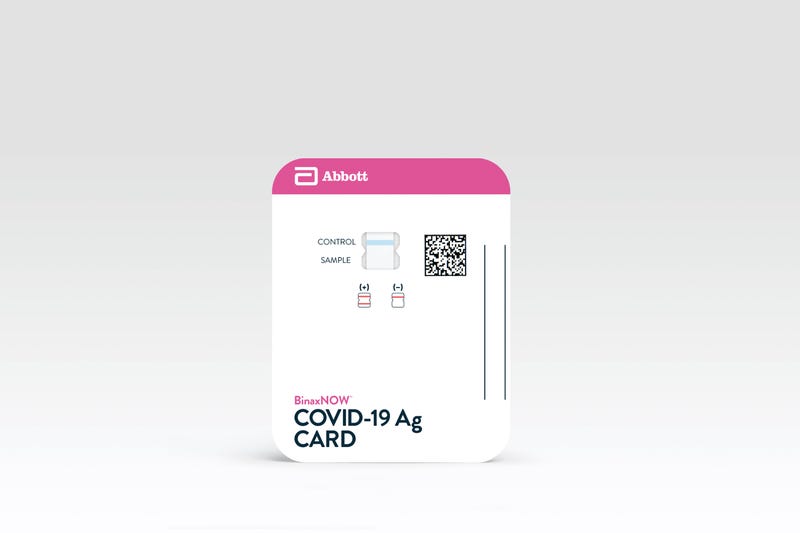 WASHINGTON (AP) — The Food and Drug Administration on Wednesday authorized the first rapid coronavirus test that doesn’t need any special computer equipment to get results.

The 15-minute test from Abbott Laboratories will sell for $5, giving it a competitive edge over similar tests that need to be popped into a small machine. The size of a credit card, the self-contained test is based on the same technology used to test for the flu, strep throat and other infections.

It's the latest cheaper, simpler test to hit the U.S. market, providing new options to expand testing as schools and businesses struggle to reopen and flu season approaches. The FDA also recently greenlighted a saliva test from Yale University that bypasses some of the supplies that have led to testing bottlenecks.

Both tests have limitations and neither can be done at home. Several companies are developing rapid, at-home tests, but none have yet won approval. Abbott’s new test still requires a nasal swab by a health worker, like most older coronavirus tests. The Yale saliva test eliminates the need for a swab, but can only be run at high-grade laboratories.

And in general, rapid tests like Abbott's are less accurate than lab-developed tests. The FDA said in a statement announcing the decision that negative results with Abbott’s test may need to be confirmed with a lab test in some cases, such as when patients have coronavirus-like symptoms. The agency granted Abbott an emergency use authorization for the test late Wednesday.

The two additions should help expand the number of available tests. The U.S. is now testing about 690,000 people per day, down from a peak of 850,000 daily tests late last month. Many public health experts believe the country will soon need to test vastly more people to find those who are infected, isolate them and contain the virus.

The FDA noted that Abbott's test could be used in a doctor’s office, emergency room or some schools. “Given the simple nature of this test, it is likely that these tests could be made broadly available,” the FDA said.

Since the start of the pandemic, nasal swab tests that are sent to a lab have been the standard for COVID-19 screening. While considered highly accurate, the tests rely on expensive, specialized machines and chemicals. Shortages of those supplies have led to repeated delays in reporting results, especially during a spike in cases last month.

Government and health experts view rapid tests that can be run outside the laboratory system as key to boosting capacity.

“Those screening tests are what we need in schools, workplaces and nursing homes in order to catch asymptomatic spreaders,” said Dr. Jonathan Quick of the Rockefeller Foundation. The nonprofit group has called for the U.S. to conduct about 4 millions per day by October, mostly rapid, point-of-care tests.

Abbott's BinaxNOW is the fourth rapid test that detects COVID-19 antigens, proteins found on the surface of the coronavirus, rather than the virus itself. It’s considered a faster, though sometimes less precise, screening method. The other tests need to be inserted into a small machine.

Inside the Abbott test is a specially coated strip that interacts with COVID-19 antigens. The patient's nasal swab is inserted into the card and a few drops of a chemical solution are added. Markings appear on the card to indicate whether the sample is positive or negative — much like a pregnancy test.

The influx of antigen tests will go a long way toward meeting the Trump administration’s projection that 90 million COVID-19 tests a month will be available by September if needed. But U.S. “testing czar" Adm. Brett Giroir has stressed that the U.S. can contain the outbreak with far fewer tests.

“That’s the capacity ... we do not need that many tests to safely and sensibly reopen,” Giroir told reporters on a recent call. He pointed to several key indicators that have been falling, including new infections and hospitalizations, even as testing has slowed.

Earlier this month, the FDA authorized Yale's saliva-based test, which is expected to cut the time and cost compared with similar tests. It’s the fifth COVID-19 saliva tests OK'd by regulators. All require lab processing.

Developed by Yale’s School of Public Health, SalivaDirect can use any sterile container to collect a sample, not the special tube needed with earlier tests, and requires less chemicals. Outside experts welcomed the new approach but noted its limitations.

"It’s not a rapid test, it’s a laboratory-based test that will still be prone to the same massive delays as any other test," said Dr. Michael Mina of Harvard University.