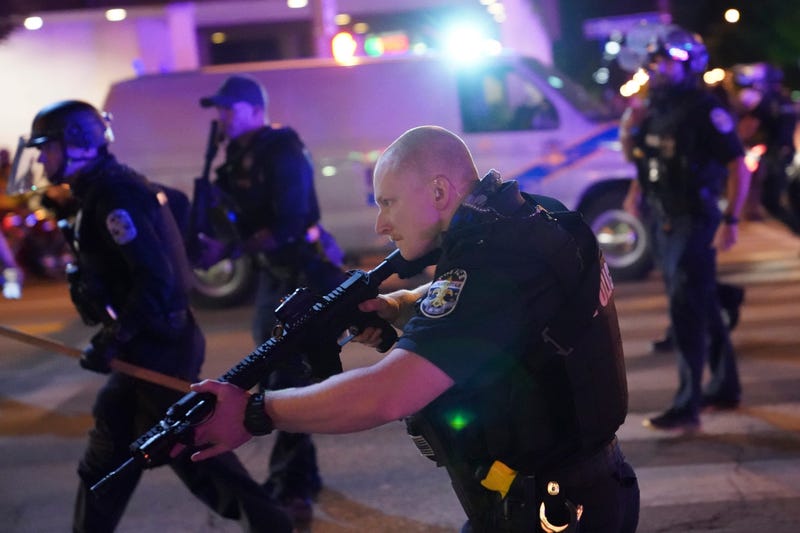 Louisville police say two officers have been shot amid protests in Louisville, Kentucky, over a lack of charges in the Breonna Taylor case.

Police say a suspect is in custody.

Police Chief Robert Schroeder said one officer is alert and stable and the other officer is in surgery and stable. He said the officers had gone gone to an area in the city to investigate reports of shots fired when they were hit by gunfire.

The shootings came hours after a grand jury on Wednesday brought no charges directly against Louisville police for the killing of a Black woman, Breonna Taylor, in a police raid gone wrong.

Hundreds of protesters gathered in downtown Chicago and various neighborhoods around the city to protest the lack of charges directly connected to Breonna Taylor’s shooting death.

About 300 people gathered in Palmer Square Park on Chicago’s northwest side before setting off on a march Wednesday evening, chanting Taylor’s name. The march was monitored by police officers on bicycles. Other demonstrators gathered in downtown’s Millennium Park chanting demands for justice as passing motorists on Michigan Avenue honked their horns.

Activist priest the Rev. Michael Pfleger told protesters gathered in the middle of an intersection that they should peacefully let those who represent the status quo know of their unhappiness with the Taylor decision.

“We’re here tonight because we do care,” Pfleger said. “And we’re here because we want to say, ‘We object and we don’t accept it. Somebody has to be held accountable.’”

Protesters dispersed by police in Louisville, Kentucky, appeared to split into small groups as they scatteredon a day of street protests arising from the Breonna Taylor case.

Meanwhile, police gave no immediate update Wednesday evening after saying an officer had been shot. It wasn’t clear if the shooting was linked to the protests. Police Sgt. Lamont Washington said in a news release Wednesday night that there would be an update when possible. He did not give further details or the condition of the officer.

Protesters have been marching through the streets, scuffles have broken out between police and protesters, and some demonstrators were arrested. Officers in riot gear fired flash bangs and a few small fires burned Wednesday evening in a square that’s been at the center of protests, but it had largely cleared out ahead of a nighttime curfew.

Louisville police say an officer has been shot amid protests over a lack of direct criminal charges for officers in Breonna Taylor’s shooting death.

A spokesman for the Louisville Metropolitan Police Department issued a brief statement Wednesday night saying ’’We currently have an officer shot. We’ll update when we can.”

The statement did not elaborate on the condition of the officer or the circumstances of the shooting.

That development came amid a fast-changing scene in Louisville, where police had earlier fired flash bang devices to clear demonstrators from a downtown square Wednesday evening. The protesters had gathered there to protest a grand jury’s decision to not indict police officers on criminal charges directly related to Taylor’s death.

Taylor, a Black woman, was fatally shot during a police raid gone bad earlier this year.

People protesting a grand jury’s decision not to indict any police officers directly for the fatal shooting of a Black woman in Kentucky have rallied in U.S. cities including New York, Chicago, Washington, D.C., Atlanta and Philadelphia.

It appeared marches and gatherings were mostly peaceful Wednesday evening. The outpouring came on a night when hundreds gathered in Louisville, Kentucky, to protest a grand jury’s decision to not indict officers on criminal charges directly related to the shooting death of Breonna Taylor in a police narcotics raid gone bad.

Demonstrators packed a New York City plaza. Chanting “Say her name, Breonna Taylor,” the crowd then started marching in downtown Brooklyn, past onlookers and honking cars. They were accompanied by musicians, setting a steady drum beat.

News outlet CNN showed marchers in Philadelphia. And a video on Twitter posted by a WJLA reporter in the Washington, D.C., area showed protesters marching in the nation’s capital chanting “Black Lives Matter!”

Police in Louisville have set off flash bang devices and cleared a square in that Kentucky city where several hundred people had gathered to protest a grand jury’s decision in the killing of Breonna Taylor.

The protesters had rallied Wednesday evening in Jefferson Square in Louisville, where a fire was set near the courthouse and then quickly extinguished.

Louisville police called Wednesday evening’s gathering an “unlawful assembly”in an announcement over a loudspeaker and ordered demonstrators to disperse. The police threatened to make arrests if people did not comply and officers in riot gear approached.

When police lined up with shields outside the courthouse, demonstrators threw plastic water bottles at them. Officers fired the flash bang devices to disperse the crowd and they appeared to head elsewhere. The square later appeared mostly empty.

The protesters had gathered in the Kentucky city to protest a grand jury’s decision to not indict police officers on criminal charges directly related to Taylor’s death earlier this year in a drug raid gone wrong.

Democratic presidential nominee Joe Biden says he hasn’t received enough information on the grand jury’s decision in the Breonna Taylor case to comment fully, but he urged protesters to keep their demonstrations peaceful.

Hundreds have gathered in Louisville to protest the grand jury’s decision to not indict police officers on criminal charges directly related to Taylor’s death.

Speaking to reporters on a tarmac in Charlotte, North Carolina, on Wednesday evening, Biden said he hoped to find out more details soon about the Taylor case and said “my heart goes out to her mother.”

“Do not sully her memory or her mother’s by engaging in any violence. It’s totally inappropriate for that to happen,” Biden said. “She wouldn’t want it, nor would her mother, so I hope they do that.”

President Donald Trump has praised Kentucky’s Republican attorney general for his handling of the investigation into Breonna Taylor’s death.

“I said, ‘Write that down for me please cause I think it was a terrific statement,’” Trump said.

Hundreds of demonstrators have gathered in Louisville to protest a grand jury’s decision to not indict police officers on criminal charges directly related to Taylor’s death.

The president said that he would be speaking with Kentucky Gov. Andy Beshear soon and said he was glad the Democrat has called up the National Guard.

Kentucky Gov. Andy Beshear says he has authorized a “limited” deployment of the National Guard as hundreds of demonstrators have gathered to protest a grand jury’s decision to not indict police officers on criminal charges directly related to Breonna Taylor’s death.

The Democratic governor said Wednesday at a news conference that the deployment is “based on very specific operations,” and is under the sole command of the National Guard.

Meanwhile, Louisville Mayor Greg Fischer said the indictment of one of the officers on a charge of wanton endangerment “confirmed our decision to terminate” him from the Louisville Metro Police Department.

Fischer said the case is “far from over” and the FBI is continuing its probe into the matter.

Also, LMPD is conducting a Professional Standards Unit investigation to determine if any policies and procedures were violated by officers involved in the case.

In urging calm, Fischer said: “Let’s turn to each other, not on each other.”

LOUISVILLE, Ky. — Some protesters in Louisville have been ordered by police to disperse hours after officials announced a grand jury’s decision to not indict police officers on criminal charges directly related to Breonna Taylor’s death.

Police on Wednesday afternoon declared a gathering on a street corner outside downtown to be “unlawful” and threatened to use chemical agents and make arrests if people did not leave.

The order was directed at a group of protesters that broke off from other demonstrators who had gathered downtown.

Curfew in the Kentucky city is set for 9 p.m.

This item has been corrected to show that the dispersal order was directed at protesters who were not downtown.

At a news conference Wednesday, Beshear urged state Attorney General Daniel Cameron to post online all the evidence and facts that can be released without affecting the three felony counts brought against a fired Louisville police officer.

A grand jury on Wednesday indicted fired Officer Brett Hankison on three counts of wanton endangerment for shooting into Taylor’s neighbors’ homes during on the night of March 13. The FBI is still investigating potential violations of federal law in the case.

"Everyone can and should be informed,” said Beshear, a former attorney general. “And those that are currently feeling frustration, feeling hurt, they deserve to know more. I trust Kentuckians. They deserve to see the facts for themselves. And I believe that the ability to process those facts helps everybody.”

LOUISVILLE, Ky. — Police have detained some people during protests in downtown Louisville in response to a grand jury’s decision to not indict police officers on criminal charges directly related to Breonna Taylor’s death.

After the decision Wednesday, protesters in Injustice Square” chanted, “No justice, no peace!” and began marching through the streets. Some sat quietly and wept.

Police later cordoned off a street with yellow tape, telling protesters to move back. Officers in protective gear could be seen detaining and handcuffing some of the protesters.

Trump’s remarks Wednesday were in response to a question about whether he thinks justice was serviced in the Breonna Taylor case. A grand jury on Wednesday declined to indict any police officers on criminal charges directly related to her death.

WASHINGTON — Democratic vice presidential nominee Kamala Harris was noncommittal in her initial response to the grand jury's decision in the Breonna Taylor case.

Harris said she could not comment specifically because she hadn't yet read the decision. But she said "there’s no question that Breonna Taylor and her family deserved justice yesterday, today and tomorrow so I’ll review it.”

The jury indicted one former officer on three counts of wanton endangerment for firing into the apartments of Taylor’s neighbors.