September 6, 2019 09/06/2019 3:03 am
WWJ’s Zach Clark is searching metro Detroit for the best of the best when it comes to craft beer. On a quest for the best tastes, funkiest brews and most unique experiences on the craft beer scene, “Craft Beer Conversation” will be a weekly series highlighting the area’s best. Be sure to check it out every Friday.

DEXTER, Mich. (WWJ) – The ever-changing world of beer sees trends come and go over the years, and recently, sour beers have become a craze all across the country.

In 2004 when Ron Jeffries and his wife started Jolly Pumpkin Artisan Ales, sour beers weren’t nearly as trendy as they are today, but they were drawn to the distinctive style more than a decade ago and decided to run with the idea.

“My wife and I were working on our business plan and we were going through different styles of beer that we wanted to brew,” Jeffries told WWJ’s Zach Clark. “When we got close to opening, we just decided that some unexplored territory in the world of beer was oak aging and sour beers. There were a few people doing it, but no one doing it exclusively. So when we opened, that’s what we decided we would do. 100% oak-aged wild beer.”

Sour beers have an intentionally sour, tart and acidic taste, thanks to an atypical brewing and fermentation process that involves wild yeast or bacteria and aging in an oak barrel, known as foeders.

While Jolly Pumpkin first started out with just sour beers, the growing company has since launched a non-sour collective. Still, though, the main attraction is the unique collection of sour beers, which Jeffries says is a process that requires patience – beers like this don’t happen overnight.

“And they take careful monitoring and shepherding as well. Typical time in a foeder, at a minimum, would be eight months. Sometimes its two years. You never really know, you just kind of have an idea of where you’d like the flavors to go, and when they get there, you know it’s time to package it.”

Jolly Pumpkin has grown over the years, with six locations in Michigan – Dexter, Detroit, Ann Arbor, Royal Oak, Grand Rapids and Traverse City – and one in Chicago. Specializing in pizza, Jolly Pumpkin offers a wide variety of food to accompany its beer. 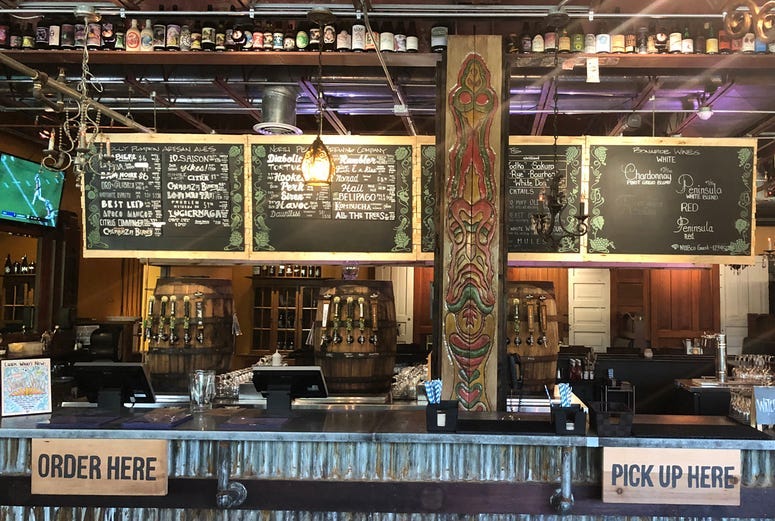 Props to the folks at @JollyPumpkin for their hospitality today. So much more on ‘Craft Beer Conversations’ Friday on @WWJ950 and anytime at https://t.co/OlF99cN4jm! pic.twitter.com/Qm2J8BgqQX

Jeffries says as they’re always looking to expand, they are opening more restaurants.

“That allows us a lot more direct-to-consumer outreach. If we can emotionally connect with them, if they’re in our restaurants and enjoying our beer, it’s a connection that we can make that’s a little hard to do on a crowded store shelf,” Jeffries said.

While Jolly Pumpkin distributes its beer in barrels and bottles, using a bottle conditioning method, Jeffries says they are looking into canning their beer in the near future.

“That’ll be pretty exciting and innovative and get us into a lot of spaces that we might not be in right now,” he said.

Jolly Pumpkin features a wide breadth of beers with a diverse catalog of sours and Jeffries, known to many as Captain Spooky J, says they’re always looking for new ways to brew.

“We’re also keeping our mind open to wacky things that we want to brew that the people who like our beers are going to like,” he said.

More about the brewing process, their selection of beers and locations can be found on the Jolly Pumpkin website.

Have a favorite brewery or brewpub you want Zach to highlight in his “Craft Beer Conversation” series? Reach out on Twitter at @ZachEClark or via email at Zach.Clark@entercom.com
Listen to more of Zach Clark's conversation with Ron Jeffries: