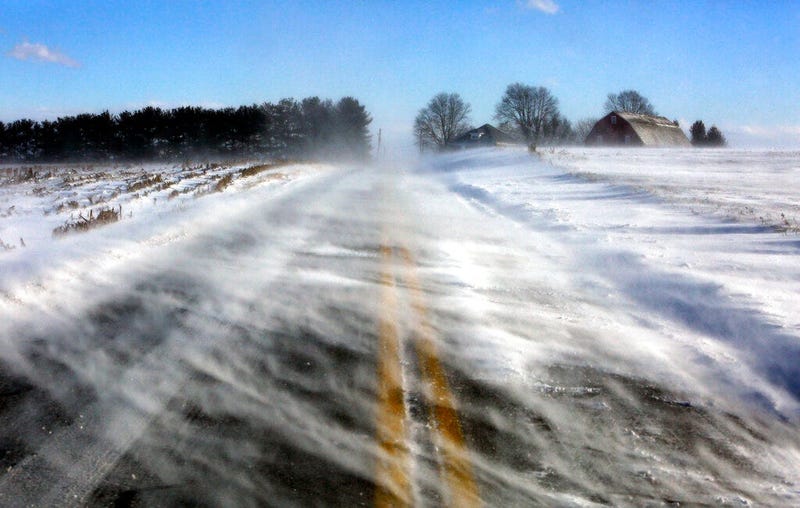 CHICAGO (AP) - The painfully cold weather holding much of the Midwest in a historic deep freeze sent temperatures plunging to record lows Thursday in several cities as the system marched east. But a dramatic swing of as much as 80 degrees was expected within days.

The frigid conditions canceled more flights, and the number of deaths blamed on the cold climbed to 13. Yet there were signs that life was getting back to normal as some students returned to school, train travel resumed and businesses reopened.

A rapid thaw seemed imminent. For instance, Moline, Illinois, saw a temperature of minus 33 degrees (minus 36 Celsius) Thursday and was forecast to hit 49 degrees (9 Celsius) by Monday.

Meanwhile, the extreme cold was settling in over the Northeast. In western New York, a storm that dumped up to 20 inches of snow (51 centimeters) gave way to subzero temperatures and dangerous wind chills. The arctic conditions caused problems from Buffalo to Brooklyn, where about 200 firefighters battling an early morning blaze in a commercial building took turns getting warm on buses.

New York Gov. Andrew Cuomo said state police would crack down on truckers who violated a travel ban on Interstate 90 between Rochester and the Pennsylvania border, after a tractor-trailer crash was blamed for a major pileup.

Schools in parts of Wisconsin, Minnesota, Michigan, Illinois and Iowa remained closed Thursday. But students headed back to school in eastern North Dakota, where subzero temperatures were forecast to crawl upward.

The blast of polar air also strained infrastructure with some of the lowest temperatures in a generation, snapping rail lines and knocking out utilities. In Detroit, more than two dozen water mains froze. About 1,700 flights in and out of Chicago airports were canceled.

Rockford, Illinois, saw a record low temperature of minus 31 (minus 35 Celsius), on Thursday. Cedar Rapids, Iowa, set a daily record low of minus 30 degrees (minus 34 Celsius).

Towing companies saw a huge demand for service after hundreds of vehicles got stranded. Trains and buses in Chicago operated with few passengers.

The hardiest commuters ventured out only after covering nearly every square inch of flesh against the extreme chill, which froze ice crystals on eyelashes and eyebrows in minutes. The Postal Service even took the rare step of suspending mail delivery in many places, and United Parcel Service also halted deliveries in several areas.

The bitter cold was the result of a split in the polar vortex, a mass of cold air that normally stays bottled up in the Arctic. The split allowed the air to spill much farther south than usual.

The weather-related deaths included an elderly Illinois man who was found several hours after he fell trying to get into his home, an Ohio woman found in a vacant home, and a University of Iowa student found dead behind an academic hall.

In Michigan, state and utility officials warned residents that they risked brief interruptions of natural gas service if they did not help reduce energy. The warning followed a fire at a utility's suburban Detroit facility that affected natural gas supplies. By Thursday, Consumers Energy said it was "cautiously optimistic" that its requests to curb natural gas use were "having a positive effect."

Amtrak began to restore service out of Chicago, one of the nation's busiest rail hubs, after canceling dozens of trains.

In Saco, Maine, firefighters had to worry about frostbite, slippery conditions and frozen gear as they chipped away at ice and snow to move hoses. A siren got stuck, contributing to the bedlam. Firefighters took breaks to warm up, but the conditions wore them down.

"You could see the look on their faces. They were cold," Deputy Fire Chief David Pendleton said.

A fire at the Vermont Farm Show in Essex, Vermont, led authorities to evacuate vendors and livestock to get them out of the cold. Horses, sheep and calves were walked out of the building on Thursday. A day earlier, a horse that became stuck between two tree trunks in northern Indiana was rescued by a chainsaw-wielding town marshal.