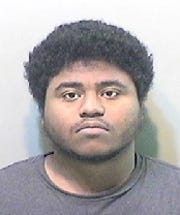 (WWJ) A few months after the video of his beating went viral, a 75-year-old nursing home patient is dead.

Norman Bledsoe drew headlines across the country in May when a 20-year-old patient at Westwood Nursing Home on the west side of the city viciously beat him. The suspect, Jayden Haden from Ypsilanti, was reportedly in the home recovering from COVID-19.

After that, Bledsoe became depressed and his health deteriorated, family members said.

He died Monday morning. "His eating habits went downhill after (the alleged assault), and he lost quite a bit of weight," Kevin Bledsoe told the Detroit News.

The beating left him with a broken jaw, fingers, ribs and other injuries.

Even President Donald Trump tweeted about the attack, writing in May, "Is this even possible to believe? Can this be for real? Where is this nursing home, how is the victim doing?"

Police are investigating if there may have been other attacks as Haden's You Tube channel shows a variety of bloody fights.

Haden is next scheduled for a hearing to determine if he's competent to stand trial. The family has retained lawyer Geoffrey Fieger to sue the nursing home.