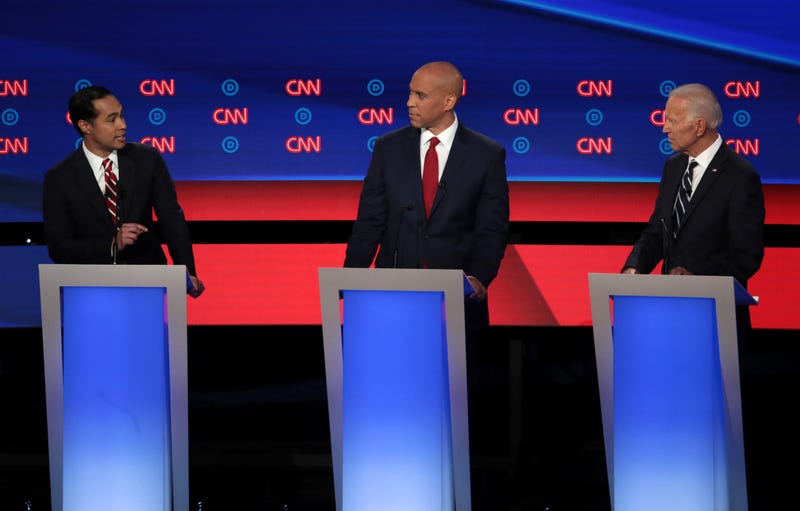 DETROIT (WWJ) -- Night two of the Democratic presidential primary debates in Detroit has been interrupted multiple times by hecklers.

New Jersey Sen. Cory Booker was forced to "stand by" during his opening remarks as hecklers shouted "fire Pantaleo." Daniel Pantaleo is the New York City Police officer that officials opted not to bring to trial in the 2014 death of Eric Garner.

In addition to Booker, nine other candidates -- including former Vice President Joe Biden, California Sen. Kamala Harris and New York City Mayor Bill de Blasio -- took to the stage at the Fox Theatre downtown Detroit to debate their policies and platforms as they vie for the Democratic Party's nomination to run against President Donald Trump in 2020.

Later, Biden was also interrupted by hecklers who were shouting "3 million deportations" -- which is a reference to the reported number of deportations during the Obama administration -- while he and Former United States Secretary of Housing and Urban Development Julián Castro discussed immigration.

Several hecklers were escorted out of the theatre.

Large security team just entered #DemDebate and removed a few hecklers who shouted “Fire Pantaleo” (and “I can’t breathe”) as they were removed. pic.twitter.com/3cZ9Us0AcW

Stay tuned to WWJ Newsradio 950 for coverage of the Democratic debates throughout the night. >>> LISTEN LIVE