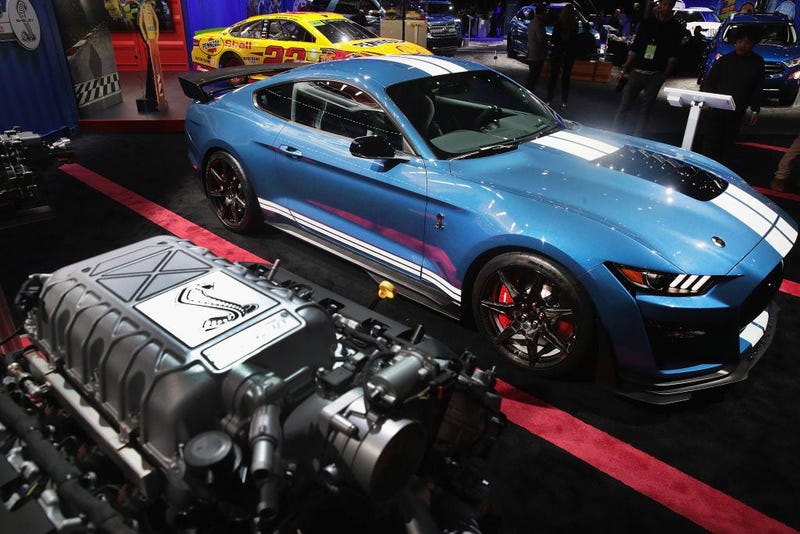 (WWJ) The most powerful street-legal Ford Mustang ever built will go on sale this fall.

A 5.2-liter supercharged V-8 will crank out 760 horsepower in the 2020 Shelby GT 500. The new version has a beefed-up suspension and brakes. The engine comes with unique pistons and other parts.

The engines are hand-built in the Romeo Engine Plant alongside the engine for the GT350.

The icon further evolves with a new, sleeker design, more advanced
technology and greater performance. From every angle, the New
MUSTANG makes a powerful impression. pic.twitter.com/MZGu95ZDik

"Compared to the GT350’s engine, the V8 in the GT500 packs larger springs and valves, CNC-ported heads and — most notably — a cross-plane crankshaft in place of the GT350’s flat-plane crank," writes autoblog.com. "Ford considered turbochargers, but the parasitic loss from a supercharger was worth it to improve throttle response and power delivery. Ford engineers say the engine makes “well over 850 gross horsepower” before driveline loss. Packaging was a major issue, too. Adding a pair of turbos greatly increases the amount of plumbing needed."

"All that power, along with a quick-shifting DCT, 16.5-inch front rotors and a set of Michelin Pilot Sport Cup 2 tires, helps send the GT500 from zero to 100 mph and back to zero in 10.6 seconds. Ford won’t tell us the zero to 60 mph time, but expect something well under 4 seconds."

Motor Trend reports, "According to Pat Morgan, powertrain manager at Ford Performance, in order to produce the GT500's 760 peak horsepower, the cylinders are producing at least 850 horses, some 90 of which spin the supercharger—that's less than we'd originally guessed. It takes six heat exchangers in front (another one cools the axle) to release all the heat that creates. Oh, we also just learned that the engine produces a minimum of 531 (net) horsepower from 3,000 rpm to its 7,500 rpm redline (85 percent of peak)."