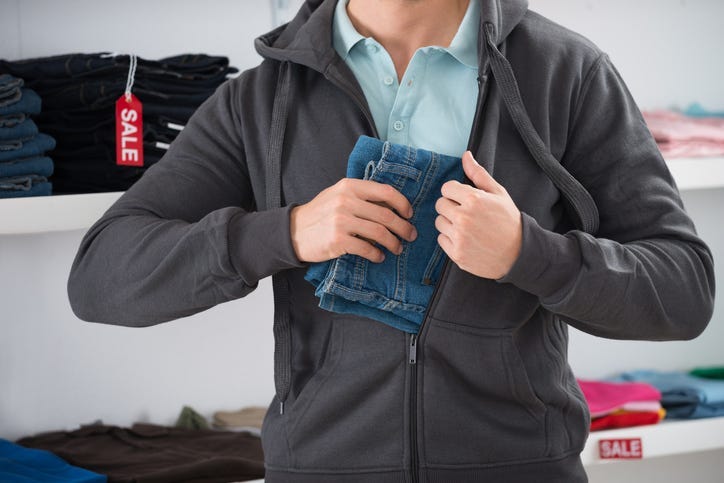 TROY (WWJ) - A crackdown on shoplifting at businesses in Troy resulted in 10 arrests and dozens of criminal charges in just two days.

Officers from the Troy Police Department teamed up with the Michigan State Police Fraud Investigation Section to stop shoplifters on January 28 and 29. The two day blitz resulted in 27 different charges related to retail crime.

The agencies partnered for the operation, recognizing that retail fraud suspects are often part of larger, organized crime rings that impact multiple jurisdictions. Loss prevention professionals from 13 different stores were also part of the effort.

Among multiple others, a 30-year-old man and 30-year-old woman from Detroit were arrested and charged with multiple counts of second degree retail fraud after allegedly stealing merchandise from Victoria’s Secret, Dick’s Sporting Goods, JC Penney and Bath and Body Works at Oakland Mall. The suspects, who were accompanied by the woman's 7-year-old child, were arrested with $736.20 worth of stolen merchandise. Child Protective Services was contacted in regards to the child.

A 67-year-old Detroit woman was observed selecting and concealing merchandise at the Dick’s Sporting Goods at Oakland Mall before she exited the store and entered a car. Officers attempted to stop the woman but she drove away, only coming to a stop when a patrol vehicle blocked her car. The woman had $190 of stolen merchandise with the security tags removed. A pair garden sheers, believed to have been used to remove security tags, were found in the woman’s purse. She is awaiting formal charges related to the incident.

A 23-year-old Detroit man and a 19-year-old Eastpointe woman were observed concealing several dimmer switches at the Home Depot on Coolidge Highway. The suspects were stopped and $179.85 worth of merchandise was recovered from the woman and $119.90 worth of goods was found on the man. An additional $850.56 worth of merchandise believed to be stolen from another Home Depot location was also recovered. Both suspects were arrested and are awaiting arraignment on retail fraud charges.

A 32-year-old Sterling Heights woman was observed selecting various Adidas merchandise at the Kohl’s store on John R Road. The suspect exited the store without paying for the items, which totaled $130. She was stopped and issued a citation for shoplifting. She is awaiting arraignment.

An 18-year-old Detroit man was observed concealing $178 worth of merchandise from the JC Penney store at Oakland Mall. When stopped by officers, the suspect was also found to have two credit cards with someone else’s name on them in his possession. He was issued a citation for shoplifting and is awaiting arraignment.

A 16-year-old Warren boy was caught concealing $180 worth of Nike merchandise at Macy’s Oakland Mall. A juvenile petition was filed related to the incident and the suspect was released to his parents.

A 23-year-old Oak Park man was observed in the Oakland Mall Macy's and JC Penney stores selecting and concealing items. He was stopped and arrested on outstanding warrants. He was issued a citation for two counts of retail fraud and is awaiting arraignment.

A 20-year-old Lathrup Village man was observed concealing $204 worth of merchandise, including Polo and Nike clothing, at the Macy’s Oakland Mall store. He allegedly went a fitting room and emerged wearing the clothing. He was stopped, the merchandise was concealed and he was issued a citation for retail fraud. He is awaiting arraignment.