(WWJ) "The officers were in a bad situation, and it could've been a lot worse," said Detroit Police Chief James Craig.

While he stressed that it's still early in the investigation, Craig took to the podium to defend the actions of his officers accused of plowing though protesters in Southwest Detroit.

Craig said a majority in the crowd were peaceful, but handful of people turned to violent and criminal behavior during a Black Lives Matter march Sunday night.

Things got dicey, the chief said, when a couple of DPD patrol cars parked to try to block the roadway protesters wanted to march down.

"As that happened, very quickly we estimate that anywhere between 25 to 30 protesters surrounded two of our police vehicle, two marked police vehicles," Craig said. "And that's where I described the agitation escalated into violent behavior."

The chief alleges that two people climbed onto one of the police vehicles.

"This gentleman jumps on top of the hood to cover up their view," Craig said, showing video to reporters at a news conference Monday. "If you look at the early part of that video that's on social media, it appears that the officers were kind of slow moving, hitting their brakes, hoping to dislodge these individuals from the hood. Then all of a sudden you see the speed increase."

Craig said the patrol car was moving at around 25 miles per hour, when someone smashed out the rear window.

"You can see in the one video that's on social media, that the police car was slowly moving, trying to get through," Craig said. "And it wasn't until that same police car, someone broke out the rear window. We're not certain in our investigation that it was a skateboard — but there are reports of a skateboard being used — but it took out the entire back window."

"During our investigation the officers reported that once they heard the back window, or rear window, smash — it was very loud, and they were not certain that they were not being fired upon," Craig said. "So it was important for them to get out of there for their safety, and certainly the safety of others. That's where you see in the video that they accelerated, to get out of there in the event that they were being fired upon."

The chief held up photos he says show damage to the patrol car. 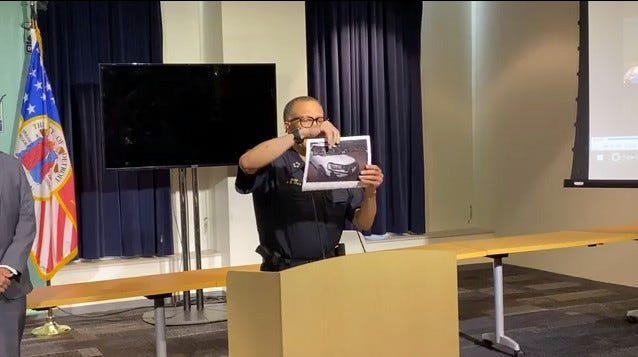 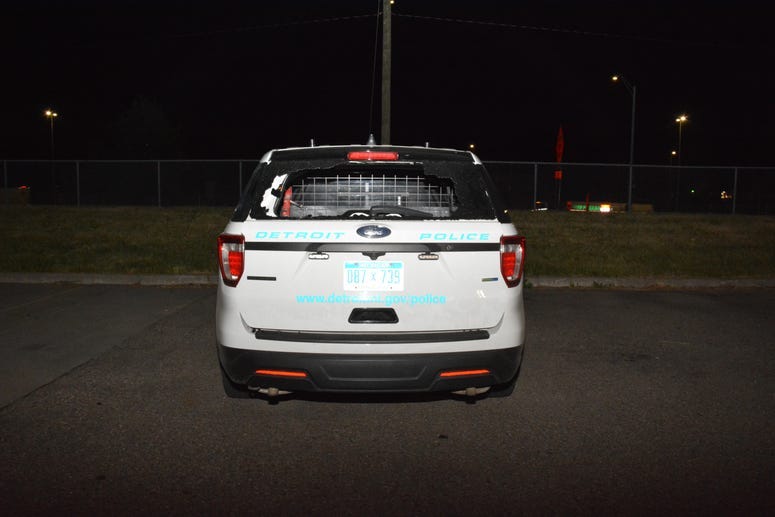 While there were reports that a protester complained of a leg injury, Craig said he is not aware of any injures in connection with the incident. He is urging anyone who was injured to come forward.

Four officers, two each in two patrol cars on the scene, are under investigation, the chief said. He did not release the officers' names.

With what information Craig has so far, would he say the officers did the right thing?

"They believed they could be shot at, were being fired upon," Craig said. "And because of that they had to take quick, evasive action."

Craig said one protester told police in a text that she decided to leave when a couple of people voiced their intent to try to provoke the police. Craig said interviews with that witness and others are ongoing.

Police, Craig said, are also working to identify the people it's alleged jumped onto the patrol car, as well as other alleged instigators on the scene.

Meanwhile, anti-police brutality protestors are planning to rally at Detroit's Fourth Precinct Monday afternoon, demanding that the officer behind the wheel be identified, fired and charged.

Members of the group "Detroit Will Breathe" assert that protesters were headed to the endpoint of the march when an officers intentionally drove into the crowd, and that they grabbed onto the hood simply to keep from being run over.

This is just the latest in a string of investigation into DPD officers' actions during protests over the last several weeks. Craig said total of 26 internal and Office of the Chief Investigator (OCI) investigations are ongoing.