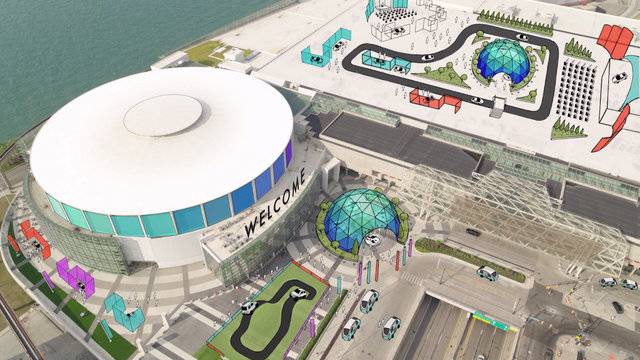 (WWJ) The 2020 North American International Auto Show in Detroit has been canceled and the U.S. Army Corps of Engineers will convert the TCF Center into a field hospital to treat patients amid the coronavirus pandemic.

Gov. Gretchen Whitmer announced Sunday morning that FEMA will fund construction at TCF Center and supply the site, which will have an estimated 900 beds available."

"The State of Michigan is working around the clock and doing everything we can to slow the spread of the coronavirus," Whitmer said in a statement. "We are proud to partner with the U.S. Army Corps of Engineers, FEMA, and the TCF Center to expand capacity in Detroit. By mobilizing quickly to construct a large alternate care facility in Detroit, we can help save lives."

The announcement comes as COVID-19 continues to spread throughout the state. Officials with the Michigan Department of Health and Human Services say more than 4,600 cases have been confirmed statewide, while the death toll has surpassed 100.

Other field hospitals could be constructed throughout the state. The corps will continue to conduct initial and in-depth site assessments around the state of Michigan to address possible medical facility shortages as the response to COVID-19 continues.

TCF Center officials say mobilization has already begun and construction will be performed by the TCF Center workforce and union labor.

"With guidance from FEMA and other officials, the site will be designed in the most efficient way possible in order to allow the convention center to resume normal operations in the weeks ahead when this crisis eases," officials said in a statement.

The 2020 NAIAS was to have been this first springtime edition of the signature auto event in the Motor City. It was set to take place June  9 through 20.

"The health and welfare of the citizens of Detroit and Michigan is paramount. TCF Center is the ideal location for this important function at this critical and unprecedented time,” NAIAS executive director Rod Alberts said in a statement.“Although we are disappointed, there is nothing more important to us than the health, safety and well-being of the citizens of Detroit and Michigan, and we will do what we can to support our community’s fight against the coronavirus outbreak."

“With the more than 100 convention centers and facilities around the country being considered to potentially serve as temporary hospitals, it became clear to us that TCF Center would be an inevitable option to serve as a care facility to satisfy our community’s urgent health needs. One of the hallmarks of NAIAS since the very beginning has been our commitment to being socially responsible,” Alberts said. “Our thoughts continue to be with those whose lives have been impacted by this devastating virus.  And, we support the city and state’s mission to help preserve life in the face of this challenging situation.”

NAIAS will hold its next annual show in June 2021.

Doug North,  2020 NAIAS Chairman, said show officials are also discussing plans for a fundraising activity later this year to benefit the children’s charities that were designated as beneficiaries of the 2020 Charity Preview event. “We know these organizations rely on the money raised at Charity Preview to fund many wonderful support services for the most vulnerable in our community,” North said. “With this in mind, we will be in touch with the charities in the near future to present some ideas.”

All tickets purchased for the 2020 NAIAS show, including tickets for the Public Show, Industry Preview and Charity Preview will be fully refunded. Charity Preview ticket holders will be given the option of a refund, or the opportunity to donate the proceeds of their refund to one of the nine designated Charity Preview beneficiaries. The NAIAS ticket office will be in contact with all ticket holders.