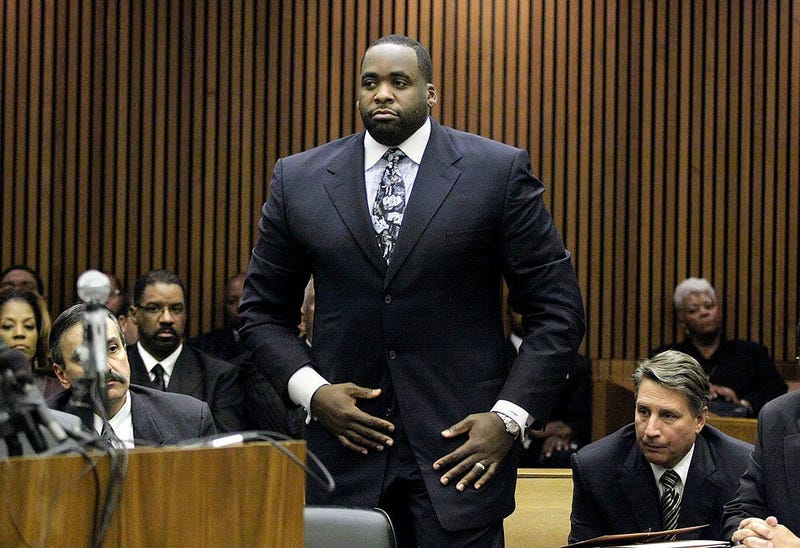 Photo credit DETROIT - OCTOBER 28: Former Detroit Mayor Kwame Kilpatrick (C) appears in Wayne County Circuit Court for his sentencing October 28, 2008 in Detroit, Michigan. Kilpatrick will spend 4 months in jail as part of a plea deal he accepted back in September in which he plead guilty to two felonies and no contest to a felony assault charge. (Photo by Bill Pugliano/Getty Images)
By WWJ News WWJ Newsradio 950

(WWJ) It appears that Kwame Kilpatrick will not be released from federal prison early after all.

According to the Federal Bureau of Prisons, federal officials on Tuesday refused to free the former Detroit mayor to home confinement amid the COVID-19 outbreak, contrary to what supporters last week hailed as an imminent release from an unfair prison sentence.

A reason was not given, and no further information about the decision was immediately released.

This comes after State Representative Karen Whitsett of Detroit said she got confirmation directly from President Donald Trump last Thursday that Kilpatrick would be one of 3,000 prisoners released because of the coronavirus. "We already felt that he had definitely gotten more time than he had absolutely deserved, and that he is not a menace to society," Whitsett told WWJ Newsradio 950's Charlie Langton.

Whitsett said there have been 42 cases of COVID-19 and five deaths at the federal prison in Oakdale, Louisiana, where the 49-year-old Kilpatrick was being held.

People close to the ex-mayor had said the ex-mayor was under a 21-day quarantine in preparation for his release, and family members were hopeful that Kilpatrick would get out on June 10.

After one fellow inmate of Kilpatrick's died of COVID-19 at Oakdale, Wayne County Sheriff Benny Napoleon was among those who said letting the ex-mayor out should be looked at, as prisons have shown to be breeding grounds for the virus.

"Certainly, the former mayor did something that he should not have done," Napoleon told WWJ. "But, realistically I think that we should look at it like — especially during this pandemic — are you mad at him, or are you scared of him?" the sheriff said.

"If you're scared of them, they deserve to be incarcerated. If all you are is mad at them, then we should figure out something, some other way to punish people that we're just mad at, we're not afraid of.

Michigan state Rep. Sherry Gay-Dagnogo back in in February delivered a letter to President Trump from Detroit leaders seeking clemency for Kilpatrick. Millionaire businessman Peter Karmanos has also lobbied for a Kilpatrick pardon from Trump, and current Detroit Mayor Mike Duggan has also expressed his support,

Kilpatrick is not expected to be paroled until 2037.