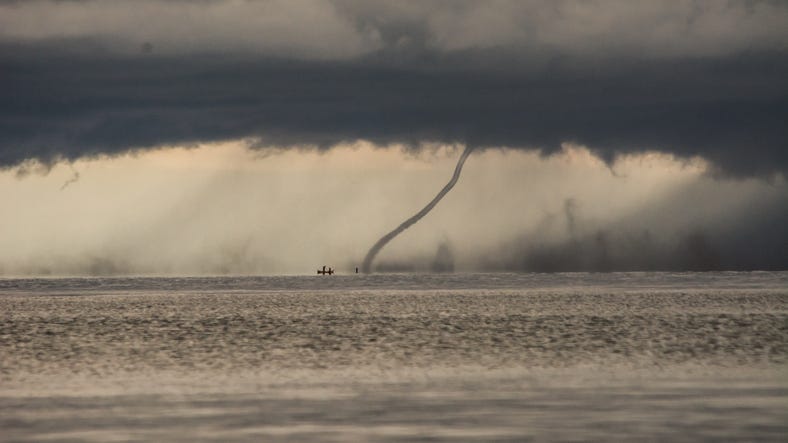 Photo credit FILE - A waterspout over a lake.(Getty)
By Marisa Jenkins WWJ Newsradio 950

(WWJ) Keep an eye out for spinning winds that could be dangerous over the next several days.

According to the National Weather Service in Grand Rapids, conditions beginning Wednesday support the development of cold air funnel clouds.

While they are generally weak and short lived and very rarely touch down, those that do reach the ground become very weak tornadoes (with winds usually less than 50 mph) that can produce minor damage, forecasters say.

If cold air funnel clouds are spotted, Michiganders are urged to play it safe and get inside a sturdy structure immediately.

Conditions, meanwhile, are also ripe for waterspouts on Michigan lakes, according to the National Weather Service in Gaylord.

Photos were taken of a couple between Charlevoix and Beaver Island and from Charlevoix, Wednesday morning.

If conditions don't change, forecasters say the weather pattern over the region could produce numerous waterspouts anytime now through Saturday.

MLive Chief Meteorologist Mark Torregrossa explained that water temperatures in the Great Lakes are now hovering between 60 and 65 degrees. That, he said, along with cooler air and significant wind gusts has the ability to produce waterspouts, which can generate 100 mph winds in the funnel.

While waterspouts are generally weaker than tornadoes and dissipate when they reach land, what they have in common with tornadoes is intense, high speed rotation — so they can be extremely dangerous for boaters.

According to Bruce B. Smith, a Meteorologist with NWS Gaylord, waterspouts occur most frequently in Michigan during the months of August through October, when the waters of the Great Lakes are near their warmest levels of the year. (Learn more about waterspouts from the NWS here.)

And as if all that wasn't enough, NWS forcasters say Northern Michigan residents and visitors may see a little snow the week. Yep, snow.

Forecasters say wet snowflakes could mix in with some chilly rain Up North Thursday night and Friday morning, in some inland locations.