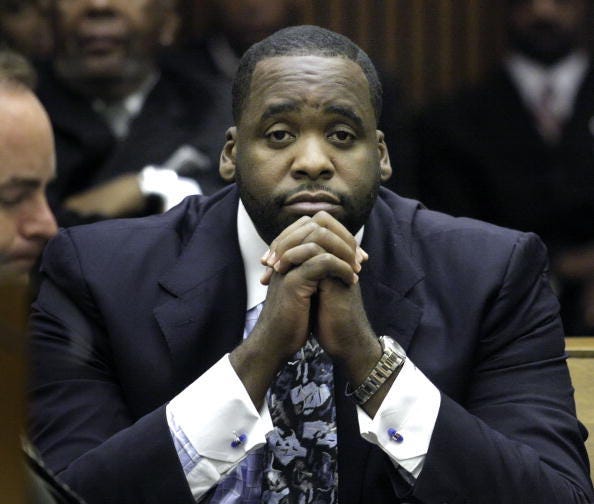 Karmanos, a Detroit native and the founder of tech company Compuware, revealed Sunday on Charlie LeDuff's "No BS News Hour" podcast that he has requested the president to grant clemency for Kilpatrick, who is serving a 28-year sentence stemming from the Detroit City Hall corruption scandal.

Kilpatrick stepped down as mayor in 2008 and in 2013 was convicted on 24 charges, including bribery and racketeering. Prosecutors asserted that Kilpatrick used his position of power to carry out a long-term criminal racket.

Karmanos, who is also a minority owner of the National Hockey League's Carolina Hurricanes, said on the podcast he believes Kilpatrick did nothing wrong.

"What you guys saw was a modern-day lynching," Karmanos said on the podcast.

Karmanos says he forwarded a letter from Kilpatrick to Trump, asking for the sentence to be commuted to time served.

The president is considering the request, according to Karmanos.

Speaking live on-air Monday night, WWJ Legal Analyst Charlie Langton says while Karmanos and Kilpatrick did business together in the past, getting a presidential pardon isn't very likely -- though in theory, it is possible.

"You add the amount of dollars affected by the crimes that Kwame Kilpatrick committed, for which he was convicted of -- including racketeering -- they're big numbers. And that ups the guidelines. Also, while he committed those crimes, he was in a position of authority. He was an elected official, and that also ups the guidelines," Langton said.

Karmanos said on the podcast Kilpatrick was a good mayor.