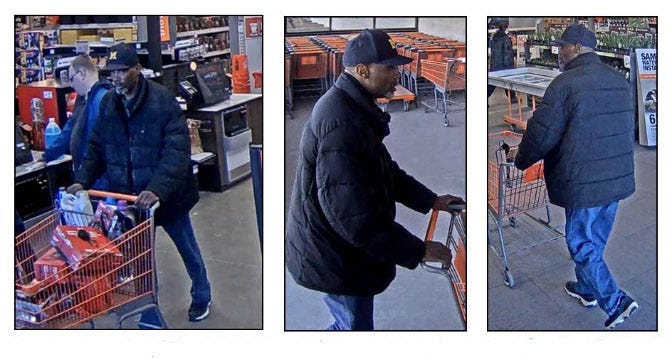 ROSEVILLE (WWJ) - Police need help from the public to identify an armed man who robbed a home improvement store in Macomb County.

The suspect was caught on surveillance camera at the Home Depot at 20500 13 Mile Road, near Little Mack, in Roseville at the time of the crime last Sunday.

According to investigators, at 1:40 p.m. the suspect attempted to steal $1,000 worth of merchandise from the store.

When the loss prevention officer approached him, the suspect allegedly pulled out a revolver handgun and hit the officer several times with it.

He then fled with the stolen items, driving away in a dark-colored Toyota Camry.

The suspect is described as a black male, approximately 45 years old, with a slim build, a gray beard and a black mustache. He was wearing a "block M" University of Michigan baseball cap, a black colored down filled jacket, blue jeans and black shoes with white soles.

As the investigation continues, a $1,000 cash reward is being offered for the tip that leads to an arrest in this case.

Anyone who knows the man in the photos or who has any helpful information should call Crime Stoppers at 1-800-SPEAK-UP (1-800-773-2587). Tips may also be submitted online at this link. As always, tipsters may stay 100 percent anonymous, will not be asked their names, to speak to police or to testify in court.